Qobuz is now available for registration to US customers as an open beta. Music lovers looking for lossless audiophile experience can join the wait list here:

Looks like Qobuz is getting ready for live beta testers for US streaming service. Read here how to get your name in

They’ll have you fill out a survey, and Qobuz is looking for a cross section of different types of users.

Qobuz is looking for a cross section of different types of users.

I fit that demographic. Haven’t heard back from them either. 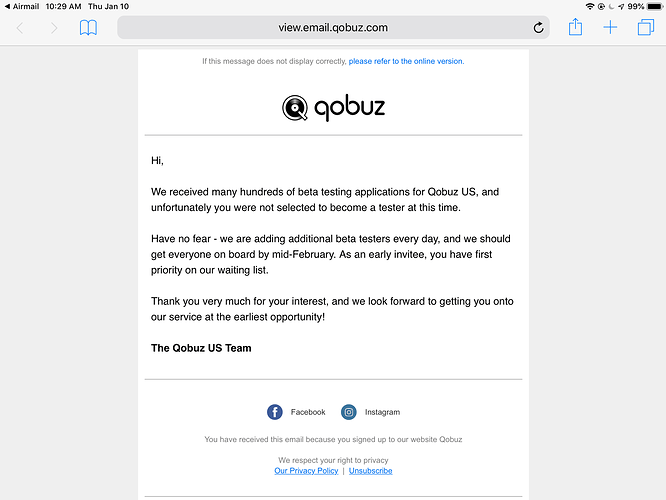 Ha ha ha… I received the same e-mail, as I was reading yours

I did too. They are probably looking for spotify users.

Got same email. So wonder if this means they don’t plan to launch until end of Feb. or even later. Also wonder if roon’s next update is tied to Qobuz US launch. Was kind of hoping early 2019 meant end sometime in Jan.

I just got my acceptance email this morning & signed up shortly thereafter. I’ve been sending out bug screenshots to their support group ever since.

The full catalog of titles is not available quite yet, but I’ve been exploring what I can in the meantime.

I also am up and running
Glad to hear that it isn’t their full catalogue as I have found space on some artists.

I was only interested in the beta to see what the full US catelog looked like. I already tried Qobuz for 3 mo after they release the Cedia free trial. Based on the catelog I had access to (unkonwn), I wouldn’t switch from Tidal.

For a music service that’s been out there for a while, the desktop application is buggy as hell. Just sayin’…

From what I’ve seen so far, I don’t see a reason to switch from Tidal.

UK user here. They are surprisingly light on popular music in its broadest sense. Apocryphally, better on Jazz, Classical but those aren’t my genres.