Question mark next to "Local Music"

Another day and another head scratcher with my new Nucleus+

Thankfully any issues have been relatively minor, but at this price, I’m going to ask about anything I see that doesn’t seem right, especially things I never saw in my years of using Roon on MacOS.

I see a question mark with a square next to it in “Focus” next to “Local Music”. See screenshot. 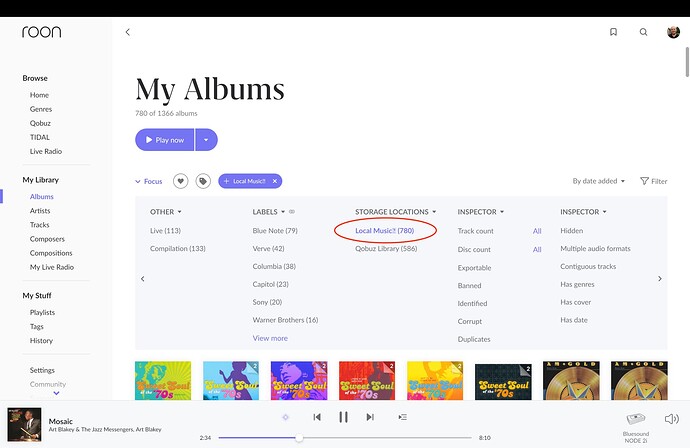 Normally I see an indicator like that and I think it is a “What’s this?” that you hover or click on with more info. But clicking on it doesn’t do anything.

The local music is there and the hard drive (SSD) is attached to the Nucleus, so there are seemingly no errors with Roon unable to find the directory or files.

So, why is that there, what is it, and if it’s not supposed to be there, how to I get rid of it?

Everything is wired, no wifi. Other than the Nucleus+ this is all gear I’ve used for a long time.

I would hazard a guess at there being a none ascii character in your folder name, perhaps a trailing space at the end or some other character it doesn’t like. Macs are not as particular about such things Linux is very particular.

a none ascii character in your folder name

If that’s what your music folder is pointing to then yes, if you used same disc on Mac it likely has some dodgy character in the local music folder name. If it’s internal music storage on the Nucleus I can’t see it being this as it would have been formatted by RoonOS.

Can I rename it on the Mac?

Can I rename it on the Mac?

Yep, that should work. Once you’ve done that you might need to head over to Settings → Storage and ‘Edit’ the location to match the renamed folder.

haha that was it. nice detective work.

extra space after the word “Music”. Deleted and it looks like it should.