Questions regarding Nucleus from a newbie with Atoll 200 Dac

As core I have a Windows PC and as output a Windows laptop. From the laptop I have my Atoll 200 DAC connected with an USB cable. It works very well and the sound is very good.

Does Roon Nucleus work with my Atoll 200?

Atoll 200 can´t decode MQA files. Does Nucleus in any way change that? Today I see that when I listen to Tidal masters there is a MQA core decoder in the sound path but I frankly dont understand what it do with the sound. Is the sound in 24 bit?

What should I think of when I choose between Nuleus and Nucleus+?

Yes the Nucleus will work with your Atoll 200 if it is currently working fine on your Core. Nucleus does not change the decoding of MQA files, you will still be able to do Core MQA decoding but will unable to perform the 2nd stage unfolding unless you have a compatible DAC with MQA rendering capabilities. MQA decodes information that is towards the end ranges of the hearing spectrum, and it would work in whatever bit-rate the track is in, provided that TIDAL has an MQA version of that album (they are still actively adding albums every week). You can read more about MQA on Wikipedia and Youtube:

Master Quality Authenticated (MQA) is an audio codec using lossy compression and a form of file fingerprinting, intended for high fidelity digital audio internet streaming and file download. Launched in 2014 by Meridian Audio, it is now owned and licensed by MQA Ltd. Announcement of MQA was made on 4 December 2014 at a launch held at The Shard in London, although the concepts underpinning the development had previously been the subject of a presentation to the Audio Engineering Society British ...


For your question regarding the Nucleus vs Nucleus+, I would refer you to this chart: 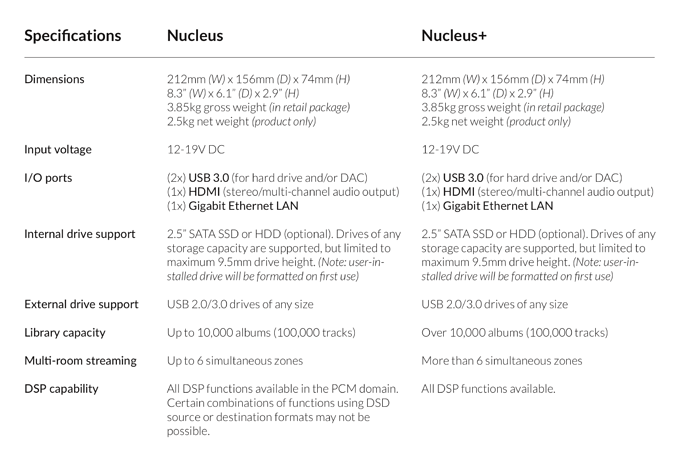 Basically the question boils down to “how large is your library” and “how many DSP functions do you see yourself using”? If your library is under 100,000 tracks, a Nucleus will do nicely, but if you have a library greater than that number, a Nucleus+ is recommended. DSP is limited as well for a Nucelus so if you are using a lot of DSD content I would suggest the Nucleus+. I hope that helps but if you have any other questions just let me know!

Hi @noris
I want topen this topic again with one furter guestion. Atoll 200 requires an own drive for the USB and is not audion class 2 compliant as I understand. Today I have thar drive in my laptop but how does that work with Nucleus. I have read somewhere in this forum that Nucleus wont work if the DAC reguires dedicated drives for the USB.

We cannot confirm your compatibility because we do not have the Atoll device in-house as a part of the Roon Tested program. The manufactures’ website does make reference to Linux capability, but you would need to check with the manufacturer to be sure. Hope this helps.

Hello @noris
I have been i contact with the manufacter of Atoll DAC 200 and have got the following answer. Do you think it’s satisfactory?

“Thank you for your interest in our products.
The DAC200 works with Linux systems and its USB input and designed with an XMOS μc and its XMOS software (no changes compared to the software version provided by XMOS): I think the Nucleus will work on your DAC200.
Do not hesitate to come back to me if you have any other questions.
Best regards,
Tony Levallois
ATOLL Electronique”

Basically, Roon Labs don’t have an Atoll DAC 200 to hand, and it would appear that Atoll Electronique don’t have a Nucleus available either, so neither party is in a position to perform a definitive test.

Your best bet would seem to be to ask a local dealer for a demo Nucleus to test at your home?

As @Geoff_Coupe mentioned we cannot confirm with absolute certainty that it would work, it should according to the documentation, but we don’t have an Atoll 200 in-house to check. Bringing in your Atoll 200 to a Nucleus dealer to verify the behavior in their store or asking the dealer to demo a Nucleus at home would be the suggested next steps here.

Hello @noris and thanks for answer
I understand what you and @Geoff_Coupe says, its probably the best. The problem for me is that I don´t have any Nucleus dealer in my city or in any nearaby…