Wired connection to my router directly

I’m struggling since the beginning (4months user now) with the “start radio” feature and the way roon radio proposes music.
Maybe i’m the only one, and maybe i’m doing something wrong… Which i hope.

My last example is this morning, trying to play some classical tunes.
On Ludwig von Beethoven artist i select " start radio".
And then quickly evoles to playing Mgmt or arcade fire or the weeknd. Artist that i love too, but just don’t matches with the style of music i want to listen too.
This morning i’ve ended up playing an album of Beethoven, missing the ability to discover other classical tunes.

I figured roon has an algorithm selecting tunes based on metadata information (should be one of their added value as a middle man) - but i can be wrong.

That being said, it’s less dramatic with other music style, although playing contemporary rnb plays the weeknd, Alicia keys, but also a lot of prince (which is not rnb) or Michael Jackson (more pop that rnb if you ask me but it’s debatable).

I hope there is a solution for this issue, as to be honest, my fallback plan (as i’ve got other things to do than struggling with playlists) is to switch to a true online radio (roon’s system admin can easily check my stats to concur this info). And using roon for playing online radio seems a bit overkill if you ask me.

Thank for the help, and I look forward to a solution.

Does it make a difference if you enter by title, album, artist or genre?

I would guess that entering via genre gives the best results and can be further refined via the styles below.

How big is the library and is there a lot of classical music in it?

Are there a lot of Qobuz classical albums in it?

It may have something to do with classical composers being defined as artists in your library. Especially the dead ones are not performing artists anymore but if you have them defined that way roon will pick up on pop/rock artist references like “Camper van Beethoven” or “Roll-Over Beethoven” etc. and pop/rock will bleed into your Classical radio streams.

I suspect you will get more consistent results if you tag your classical composers as “composers” rather than artists. But that may be a lot of work that is not worth it to you. I have Classical composers tagged as composers in my library and do not experience what you describe although it does happen on occassion for different reasons. Mostly because film music can often be tagged as both Classical and pop/rock so on occassion pop/rock will bleed into a Classical radio stream. Mostly I am able to prevent that by deleting both Classical and pop/rock tags for film music and using something more specific like “original score” and/or “classical cross-over” instead.

Thank for your reaction. I appreciate it. I also figure that you don’t have the same issues based on your answers.

I don’t use tags. And i just checked the composer list, as well as artists : no trace of Beethoven. So i don’t think that’s my issue.

Basically i want roon to play music “alike” correctly. Without looking at my library. that’s the only way to discover new songs.

Refining styles doesn’t help either. I have a nice screenshot from this morning where i’m playing Beethoven, and the next proposed song is mgmt then weeknd… Makes simply no sense.

If you start Roon Radio with a track that is from an unidentified album, Radio will go in whatever direction

I usually start from an artist. Should be the same no ?

Playing atm from eminem. Which seems to be working fine. 3rd song is rap style.

i just checked the composer list, as well as artists : no trace of Beethoven

Ok. I hadn’t realised you were using no tags. When you say “no trace of Beethoven”, do you not have a page similar to this in your composers list? 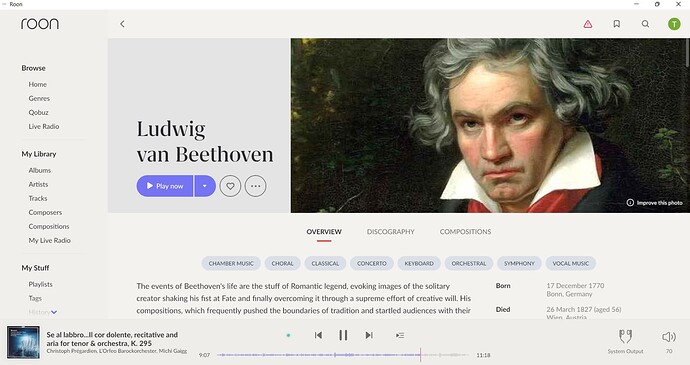 How did you start your Beethoven stream without a page like that?

If you have a a lot of unidentified albums without basic genre tags like Classical or Pop/Rock and your composers and artists are just unidentified text strings with no connection to roons databases then your radio streams are going to be quite random without much pattern.

Yes i find a page like that and that’s exactly where i started the radio from. I meant that i had no Beethoven added in my own Library. Although i like to add the artists/ composer of my taste in my Library.

The weird behaviour seems to be related with specific music style. Yesterday evening i played some rap, started a radio from eminem and it worked great as roon proposed related tunes.

What if you try to start radio from that page ? What is roon proposing randomly in the firsts songs?

Ok. I don’t think I have ever started radio from a composer page. I can partially reproduce your results.

I first get a message along the lines “nothing similar found to play, reverting to local library only”.

Do you see that message flash up?

Next roon plays Depeche Mode. Nice track but absolutely not what I was expecting. Roon then starts playing a random collection of Classical music from my local library. I would not say that any of it was “similar” to Beethoven. I am not even sure what similar to Beethoven means. Maybe roon has the same problem? What exactly does similar to Beethoven mean? I don’t know. There is no rhyme nor reason to the radio stream that roon then serves up after the Depeche Mode track other than it all has a Classical tag. There is also a Beethoven Piano Concerto which by definition of course is “similar” to Beethoven. So I soon switched it off as I was not enjoying it. You will see that I skipped many tracks as there was no programmatic “mood” connecting the music or any reason I could think of why I wanted to listen to this. Much worse than a simple “focused” shuffle over which content I have some control 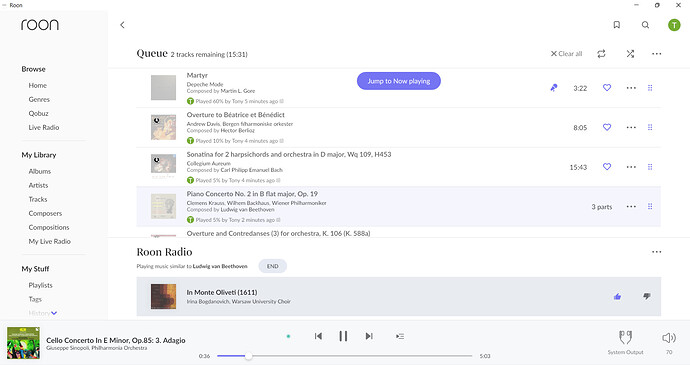 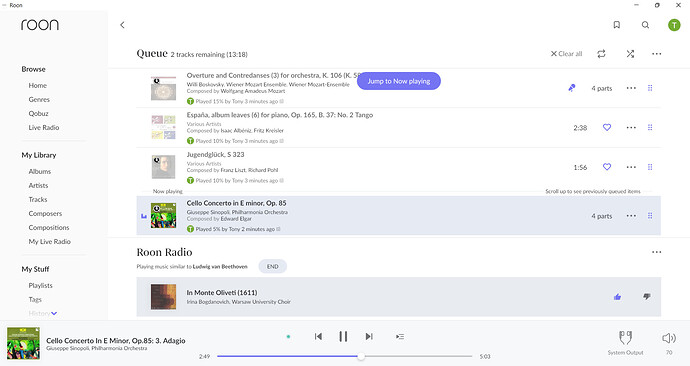 Out of curiosity I then started radio from the genre “Classical”. Now I immediately get a Classical track and no error message saying roon cannot find anything similar. The radio stream is much more enjoyable this time and seems to have some kind of connection to my listening preferences. It’s predominantly chamber some piano, some violin, some modern. It’s not something I would do again as it is too predictable for my taste but I can live with it: 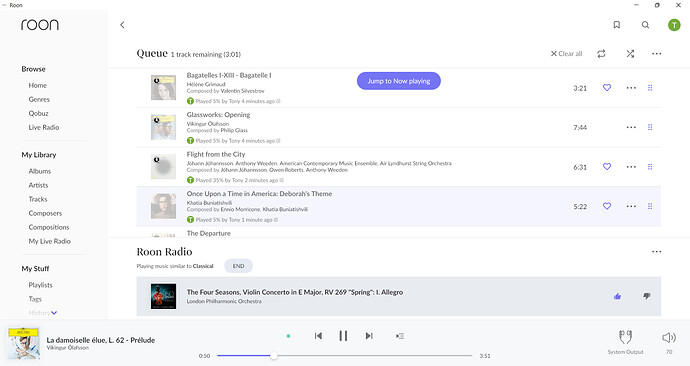 Much more likely is I would choose a Classical sub-genre like “Choral” or “Modern Composition” or both as I find that this gives a more focused programmatic experience like a real human DJ’d radio.

I gave another try and playing rap style (just did), pops up some rap vides, but i also get other styles in between.

I’ll try classical again tomorrow morning. But i believe i did already and ly experience was bad.

My guess is the way radio work is bad, or i expect something that was never meant.

I hope a solution can be found. Radio is a must have for me.

Do you have any Eminem IN your library? Try adding a Beethoven album to your library first, and then, try Radio.

Small update.
I’ve figured that indeed somehow roon goes into the local library. Once i remove the queue and start again the radio the results are better. With classical. (I also got movie music like hans Zimmer and others)

I’ve tried pop/rock and the queue is filled automatically with my library, which i remove but then the results are not good, it’s playing Metallica, some rap music… It really is bad.

Honestly i don’t like the way this works, i find it not reliable. Listening to music should be relaxing and assle free.

@Rugby sorry forgot to answer.
Yes Eminem is in my library and Beethoven as well.

Basically i’m adding artists as soon as i listen to them.
Much like with Spotify approach.
Results would be improved if i don’t use the Library maybe?

Results would be improved if i don’t use the Library maybe?

I could not determine even with empty local database!

Only Qobuz
Only Tidal
or
Only Qobuz plus Tidal

Don’t give better results than related artists with fast album progression and repeats of popular tracks.

Results would be improved if i don’t use the Library maybe?

No. I was just curious if the experience was different for you, if the originating artist had an album IN your library before you started the Radio, vs. if you started Radio on an Artist for whom you had no albums in your library.

Nop i didn’t notice any change.

I’m playing rap music, started off an artist directly and it’s consistent. I’m an it guy so i kinda get a grip on how applications work. But in this case i’m lost.

I feel like music genre shouln’t be used, and should reported as unreliable.
I’m on qobuz only though.

I can confirm one thing : launching a radio from the genre (classical atm), sometimes limits the tunes from your library. In this you have everything and it’s not limited to classical genre.
I stopped and started again a few times, after 3 times it works and propose classical stuff… .
Maybe something to be looked at tought by roon devs ?

I can repeat this must be a bug in radio, what a surprise. @support care to comment here is this expected behaviour.

Well i would be happy to dive into this isse together with support, even by phone if needed.

Other questions, the genre theme as sub genres. Many of them have the “play” grayed out. Is that normal?

not limited to classical genre

I too get it being limited to my library. And, that seems to be a bug.

I am almost positive this is how things work with Genre Radio, but, things might have changed. When starting Radio from a Genre… 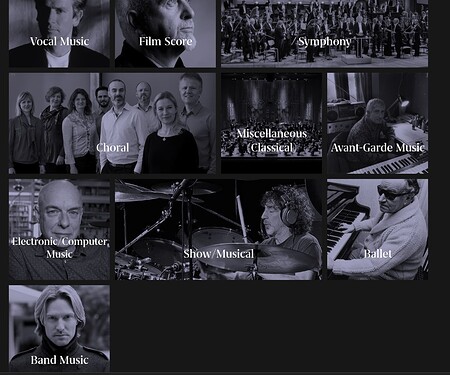 Note that Film Score and Show/Musical is in there. So for example, that would include Elton John’s “Aida” or Peter Gabriel’s “Birdy” as potential Classical Genre radio choices.