This is not so much a hardware issue as it relates to how Roon is handling multi-part works in the music queue. I have the most recent Roon on all Windows devices (v1.6, build 416).

Roon has a handy feature of being able to scroll back through the queue and replay a sequence of albums and/or tracks. This works well, except when the playback enounters a multi-part work.

These played through with no issues on the first run through. But in two subsequent plays, Roon seems to randomly play only one part of each multi-part work. For instance, this morning’s Debussy replay ended up playing only “Nuages” from Nocturnes (the first of three parts), then continued to play one of the parts from La Mer (can’t recall which one, but it wasn’t the first part). In the Bartok, it played the third part of Music for Strings, Percussion & Celesta (the Adagio).

If I go back to each individual work, I can click on, say, “4 parts” and see all of the separate parts in the work, start playback there, and it works as expected. But just replaying the queue from my first choice, it is only choosing one part seemingly at random.

Not sure if it’s a bug, or I’m using it wrong, but I will say behavior is “not as expected.”

If you go back and start playback of the queue again does it skip in the same places each time?

Can you share a screenshot of the queue where you started playback and are experiencing issues?

Hi @dylan, here is a screenshot from the queue. 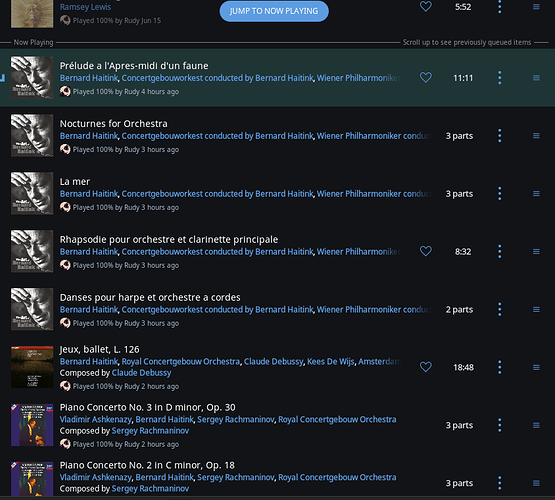 I restarted the queue just now. The first track plays, as shown in the attached screenshot. I advanced using the Next button >| , and it played the third part of Nocturnes for Orchestra (III. Sirenes). Advanced again, and it played the third part of La Mer (III. Dialogue du vent et de la mer). The next item in the queue is a single track and played properly. Advancing to “Danses pour harpe et orchestre a cordes” played the second of two parts. Clicking through to the last of the Bartok, it has been playing the last part of each work this time around.

I repeated it, manually advancing, and it’s again playing the last part of each work.

Different test. I started on the first track in the queue again. I advanced that track to the end, so it would advance on its own. Now it’s getting interesting. It is on Nocturnes for Orchestra, playing “I. Nuages” (the first part of the work) as it should, yet the track is shown in the player as “III. Sirenes”. (The total track tinme 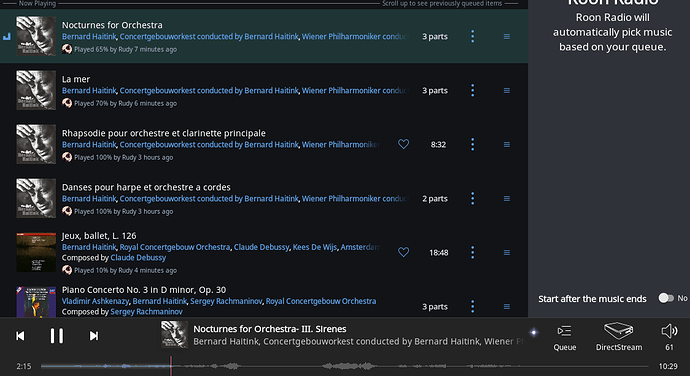 If I manually move the track towards the end and let it advance on its own, it should play “II. Fetes” in Nocturnes but instead, jumps to the first part of La Mer and again, shows the third part in the player. And since the first part of La Mer is longer, something interesting happens with the red track position indicator…it drifts off to the right until it disappears from the window:

After this track, it advanced to “Rhapsodie pour orchestre et clarinette principale,” skipping the remaining two parts of La Mer.

And this seems consistent with the rest. If the track advances on its own, it is playing only the first part of each work, then skipping to the next track or work. But it is displaying the last part in the work in the player.

And as I mentioned above, If I manually advance to the next track though, it is playing the last part of each work and skipping ahead.

Thanks, @Rudy_R — I’ve passed this along to the team for investigation.