Raspberry Pi shows up and is enabled, then falls off the grid

I’ve had a devil of a time getting this RPi to work since I moved. It worked pretty well in the old house, but I was having trouble getting it recognized on the network. So, I:

I use Netgear routers/extenders, and they have a program called “genie” in which I can see a network map.

The RPi is now showing up as wirelessly attached to the network and has an IP address and a signal strength of 100%.

When I go into Roon and select audio, it will initially pop up as disabled, and when I go to enable it, it may get stuck cycling to the device settings screen like this: 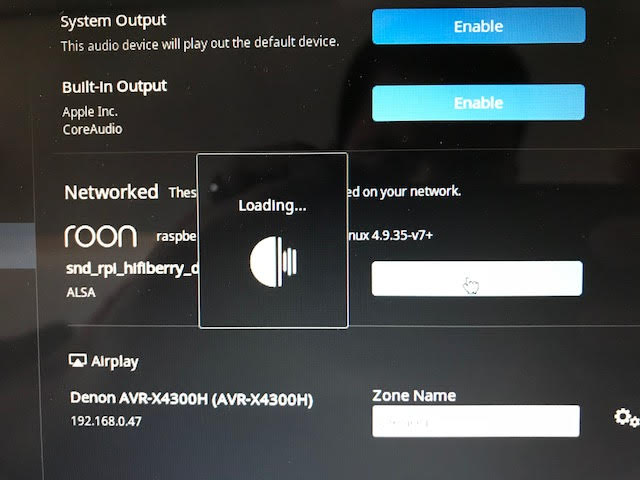 Then sometimes it decides it will activate and it will allow me to select it as a zone. After I do this and then pick an album, it will try to play the track for a few seconds and then drop off the list as if Roon never recognized it in the first place.

Needless to say none of my other endpoints are doing this.

Suggestions from the hive?

I would get rid of wi-fi. From my experience the Roon endpoints on RPi do not like wi-fi. And the effects on SQ are not very pleasant if you use RPi USB out. RPi wi-fi is implemented like an internal USB dongle.
I settled on the Hifiberry Roon endpoint image, they disabled BT and wi-fi out of the box. Powerline network extender is good option for wired connection. Or use Netgear wi-fi extender with Ethernet port and run the cable to RPi. You are still using wi-fi, but Netgear wi-fi is way more reliable than RPi.

Although I agree with the previous poster on wifi reliability in general… it should work. Have you tried a different image?

have not tried a different image, but am about to. I just committed to running another cat6 ethernet from the network switch to a newly installed wall plate behind the shiit stack and running another Rpi there that isn’t causing as much problems, but in principle this RPi should be working with wifi. I can use it on a mono speaker like one of those Marshall amp speakers, more for outdoor parties etc, but of course it irks me when I can’t get things to work that are ostensibly supposed to. What’s the point of advertising wifi if it intermittently craps out?

Weirdly, I am having similar problems trying to get the iphone zone to work. It does one of either two things:

Since I added a netgear wifi extender, I wonder if there’s a separate login for that device that is preventing smooth transmission. I’ll add screenshots when I can.

Also very strangely, in an attempt to remove the wireless shenanigans, I plugged the dragonfly red directly into the macbook where the Roon core is. That worked fine. Perhaps this is a bug of which big brother is aware; just throwing it out there.

Good call–I settled on both of these plans, trying the Netgear wifi extender and the Powerline network. I’ll let you guys know how it turns out.

I have 7 Roon RPi3 endpoints at home, three of which are wireless. They are the ones that give me the most trouble.

My former most troublesome wireless RPi3 endpoint was for multichannel DSF audio in an upstairs den. Power line ethernet did not work for me. Hard wired ethernet to a top end ASUS router configured just to act as a hub didn’t work either. However, with ethernet over cable TV wiring (MoCA 2.0), I never get any dropouts or “lost” endpoint issues with my mutichannel endpoint.

ActionTec makes the ethernet over cable devices. They are basically plug in devices if your home cable network can handle it. We had Comcast at our home three times before they got the ActionTec devices working — but now, they are great.

So, another idea to try if none of the prior suggestions work for you. JCR

Thanks so much. I’m going to try the PowerLine ethernet things next, and if that doesn’t work then Bryston makes a pi dongle that may be worth a shot. I could drop this cat 6 wire down my wall, but that shenanigans will take me four hours and I’ll have to hire my sheetrock guy to patch and paint my notches, which sucks.

Will keep you guys posted.

Thanks for all the great responses!

I could drop this cat 6 wire down my wall, but that shenanigans will take me four hours and I’ll have to hire my sheetrock guy to patch and paint my notches, which sucks.

Just do it! This will save you so much pain and wasted time (4 hours easily) in the long run. Wireless and powerline extenders are a good recipe for networking hassle in general and specifically with Roon.

I tried the Powerline ethernet products from Netgear, and they seem to work very well for the time being. Before having to punch holes in the walls again in my brand new house I’m going to stick with these for a while and if they start of fritz out then I’ll go hardline.

Thanks everyone for your astute advice.

Fwiw all my RPi Wifi problems disappeared when I added an Edimax EW-7811Un N150. It worked out the box with Volumio.