DSL to Eero mesh network. Core and endpoint connected to Eero by ethernet

The “recent activity” section of my overview page shows 14 albums that I have not played recently, including two from Tidal, although I have not had a Tidal subscription in over a year. These tracks appear in my history as played “just now,” most at 100%, including the Tidal tracks, which are also labeled “unavailable.”

Any idea what’s going on?

Have you got more than one profile, and Roon is showing the content of an older profile?

Here’s my history page, scrolled down so you can see the Tidal tracks marked “unavailable”: 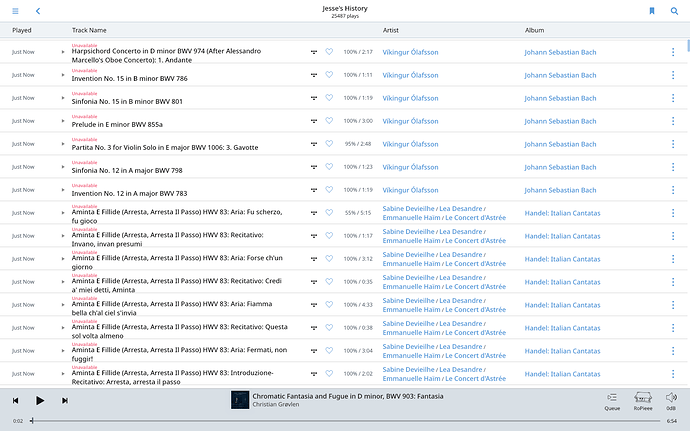 And here’s my recent activity page: 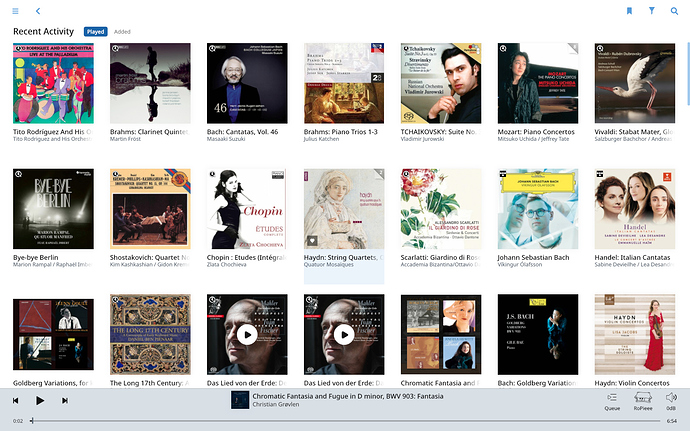 At the top, the same 14 albums appear as on Friday, followed by my actual recent activity.

Thanks, @Geoff_Coupe, for your suggestion. I don’t recall ever creating additional profiles. Wherever this information comes from, it is internally contradictory: these tracks all read as played “just now,” mostly in their entirety.

A good idea to be on the safe side, thanks.

The information displayed doesn’t seem to be a record of anything that actually occurred. It includes tracks from Tidal, Qobuz (to which I currently subscribe), and my local files. I believe they all appeared simultaneously, and they remain permanently “just” played.

Those appear to be a majority of Qobuz files, so I would change your Qobuz password as well.
If this behavior re-occurs after the password change, can you please provide new screenshots?
Thanks!

Done, but I don’t think Qobuz could be the origin of this issue, since tracks from Tidal and my local library also appear, and the same albums and tracks remain “recent” and played “just now.”

As far as I have seen, this behavior is not ongoing: a record of these plays is simply baked into my system. Here’s a screenshot of my recent activity from a few minutes ago: 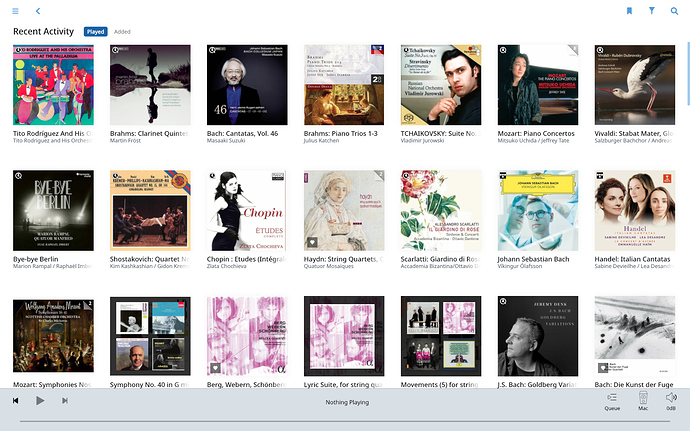 The same 14 albums as on Monday still appear as the most recent, followed by my actual recent activity.

My history does show the work I actually played most recently (11 hours ago) at the top but then goes back to the “just now” tracks, which seem to be unchanged: 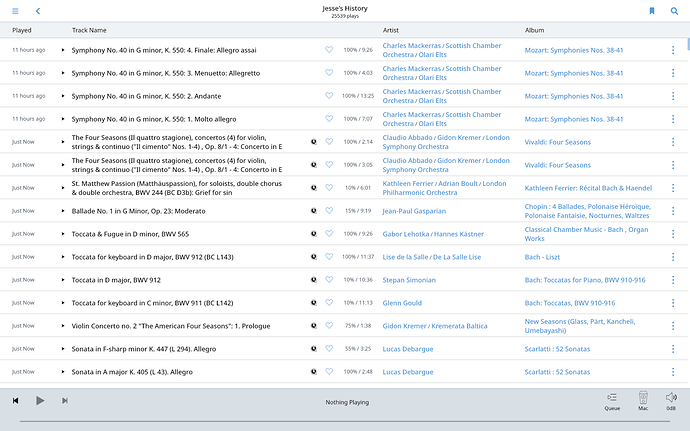 I had the core turned off for the weekend and just booted it back up. The “just now” tracks have returned to the top of my history: 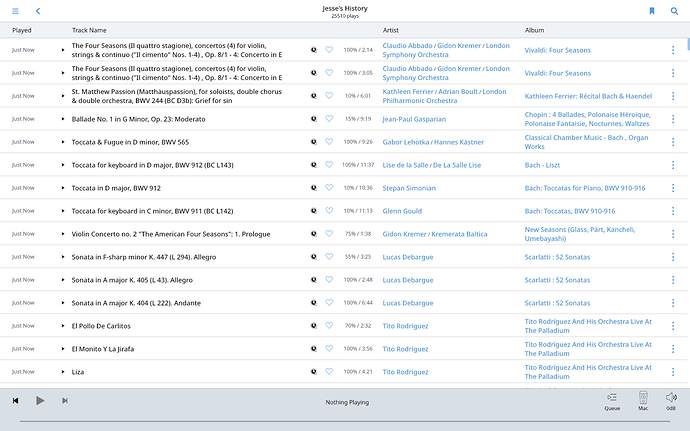 Thanks for the screenshots here, this is certainly strange behavior.
How large is your RoonSever Database Folder? Getting your database over to QA would be a good next step here, can you please:

Thanks again for sending that database over. QA has started reviewing your case, but a few questions came up, can you please let me know:

I had the core turned off for the weekend and just booted it back up. The “just now” tracks have returned to the top of my history

I first noticed this issue after a reboot, but subsequent reboots haven’t had any effect. Sometimes my actual recent plays will appear above the “just now” tracks, but after some time has elapsed, the “just now” tracks return to the top. That’s where they are right now. The 14 albums at the top of my recent activity page have remained exactly as they were in the screenshots I shared.

I just cleared my queue for every zone I have active. No effect.

Also note that “cleaning up” all files under “library maintenance” had no effect.

Thanks for letting me know that info and for running the queue clear test, let me get these updates over to the QA team and I’ll let you know what they say!

I took a look at our internal tracker today, and I can see that your ticket is still in our review queue. This means our team is still planning to look at this, but it has not reached QA’s queue yet.

Once the ticket has been reviewed by the QA team I will let you know. Thanks in advance for your patience!