Recent Activity: Play Actions instead of playing the song (Solved in Version 1.8)

Currently, with the release of Roon 1.7 (Build 571), the new Recent Activity shows songs with the Play button on top so you can listen to that song again. When clicking on the Play button, the song plays immediately (regardless of whether another song is playing right now or not). This behavior is confusing and annoying to me because everywhere else, the Play Actions are being used (for Play Now, Add Next, Add to Queue etc.). Could you please update the button so it would show the Play Actions instead of playing the song immediately?

I hope you understand my reasoning and agree. If not, I’d like to hear the reasoning for this method if possible. Thank you in advance for your support.

If you press and hold/right click then the blue options play box appears top left. You can then choose a different option for this time.

Yes, I’m aware of this workaround, but it’s still a hassle to me at least.

So do you want a different default action here compared to tracks elsewhere?

You have me confused as well.

When I click on a track elsewhere, I get the Play Actions.

If you click on the little play arrow next to tracks elsewhere though (rather than the track title for instance) you will immediately get the default.

You can change what the default action is by going to
settings > play actions > tracks and performances and dragging your preferred action to the top.

I see what you mean now. I rarely use those Play buttons. I guess my request was to replace the Play Button with a Play Actions button. I always quickly choose between Add Next and Add To Queue.

Thanks for pointing that out though. It’s less annoying to me now I know I can at least set the default to Add Next

I rarely use those Play buttons.

Nor me.
I did wonder whether tapping/clicking just outside the play arrow would work, but that brings up the album.

Where do you see the play buttons? I’m missing them. I have to select an album/track to show the play button on top of the screen. Clicking an Item will open the album on my system.

Embedded in the track cover 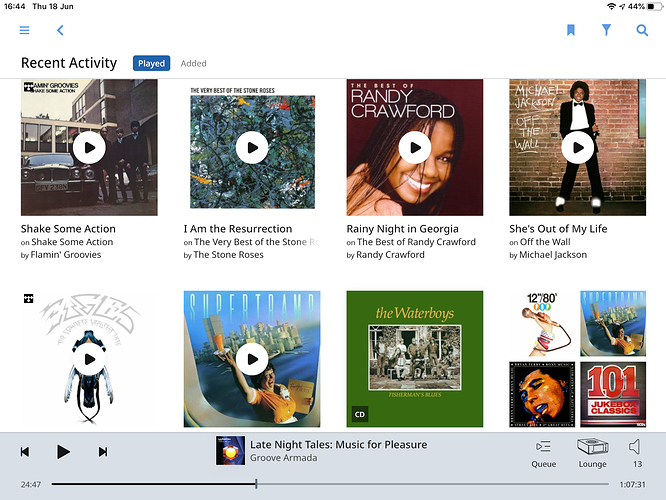 How do you get those?
I don’t see them.
Overview / Recent Activity / Played / See All?

Don’t have them on iPad or Windows.

You say “track covers” and those are tracks.
My Recent Activity shows albums.
Hmm…

If you play indivudual tracks rather than “most” of an album it should show tracks.
I don’t know what comprises enough if an album play to show up. More than 1 track, less than…

If you play a track it is a track. There is no “rolling it up” into an album logic. In fact, you only need to play 1 second of a track for it to pollute the Recently Played section. Not even long enough for it to make it onto History.

I’m not sure I have.

Yes, but in essence you are adding an album (even if you might consider it an exerpt) with “Play from here”. But, yes, the interaction between different play actions and Recently played are different.

But, then again not my issue as I play each track individually, because… I am previewing the songs; I am not listening to the whole song. Which is why I mention the criteria for inclusion in history which requires a minimum playback time to be considered “Played”.

It seems that, with singles (1 track albums) the Play button appears depending on whether you clicked the Play Button on top or on the actual track itself. Am I right about that?

It would make more sense to me if the button would just always appear on singles. Not sure if I should create another topic for this though.

Honestly, I still can’t really get used to this buttons. I’m thinking now that I’d actually prefer if the Play button was removed entirely and have a regular album cover art linking to the album. You could still highlight the song in the Album page to reference the song that was recently played. What do you guys think?