Regarding Roon transport and power supply

I am quite new to Roon and just finished setting up a Roon core with an Intel NUC and installed ROCK. I had a NAIM uniti amp which was roon ready and hence was identifiable by the roon remote. However due to some issues with Naim, I replaced it with a RME ADI-2 DAC and a Schiit Ragnarok integrated amplifier. The DAC is not Roon ready, so I connected a USB cable (Type A to Type B) from my NUC to the DAC. Now the DAC is identified by roon remote and everything seems to work fine. A few follow up questions:

otherwise there will be jitter/ clock issues. Is this true? Could someone elaborate on this? If yes, then any thoughts on these options

The store said there will be jitter/clock issues with the RME ADI-2 DAC ?

That’s one of the best performing DACs (objectively) on the planet and jitter is not an issue with that DAC. Even with it’s TOSlink (optical) input.

What about attaching an audioquest jitterbug on the Intel NUC and connecting it to the USB cable? Will this solve any clock issues that may happen?

Jitterbug can be effective with reducing RF on USB ground line. I’ve seen a couple well known and highly regarded DAC designers say it CAN be effective - depending on the overall system. Jitterbug’s key function is not jitter related.

It’s not crazily expensive compared to some other USB gadgets (that attempt to tackle different things) and if you can trial one without risk, give it a listen in your system. If it doesn’t make a difference to your ears, send it back for a refund.

I do personally follow Roon’s recommendation of separating Core and Endpoint. The microRendu is a great low power consumption networked USB source and will allow you to move your Core (NUC) outside the listening room, if you’re able to.

The Allo USBridge Signature is coming soon and may be cheaper than the microRendu (I don’t know for sure, have to wait for pricing) so that’s another option you can consider.

But none of this is jitter related, especially not with the RME ADI-2 DAC.

If you like the current sound, live with it for awhile. Otherwise you won’t have much of a baseline when you go switching things around to tell if things are really making a difference.

I would have gone another Roon Ready unit and avoided all this jitter/clock conversation.

@dabassgoesboomboom thanks for the detailed answer. So whats the purpose of microrendu or ultrarendu? Is their primary purpose just to separate the core and the endpoint or do they offer any audio enhancement by doing something?

Good point @Rugby I was planning to go with another roon ready DAC too, but my friend said, this RME DAC is really fantastic and super cheap when compared to the other high end ones.It can be returned in 30 days

So whats the purpose of microrendu or ultrarendu? Is their primary purpose just to separate the core and the endpoint or do they offer any audio enhancement by doing something?

Good/best USB signal integrity and can provide very clean (low noise) 5V bus power for DACs that use it. RME ADI-2 probably won’t benefit much, if at all… but if you can somehow trial at home risk-free, that’s the best thing to do.

avoided all this jitter/clock conversation.

There’s no jitter conversation to be had with the RME ADI-2 DAC. Even with TOSlink input.

Pro FS and ADI-2 DAC are the same, other than A/D converter. 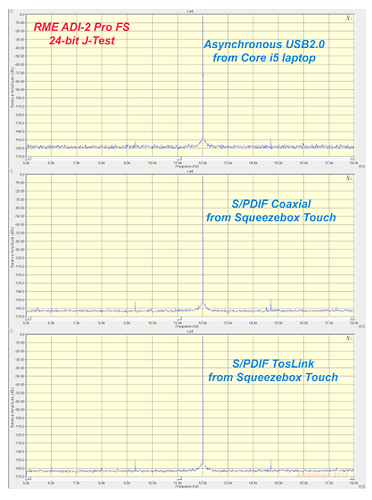 I was planning to go with another roon ready DAC too,

Just seeing an ethernet input and Roon Ready certification on a DAC won’t automatically make it a better performer than a USB DAC. It may not automatically even be the best performing input for a given DAC which has multiple inputs.

For example, the Bluesound Node 2i is Roon Ready but I think your ADI-2 DAC may be a better performer…

Thanks for your inputs.

There is a lot of kit sold to the audiophile market based solely upon an appeal to the users’ ego. After all, what aficionado would ever admit that their recent $1,000 purchase did not noticeably improve sound quality?

I’d insist on an A/B test and/or a 10-day return policy. If you can’t hear the jitter, don’t buy something to fix it.

So it depends on whether you want your NUC and DAC in the same room.
If you were to put your NUC and associated media storage (USB disk or NAS) in a different room/part of the house, away from your DAC and amp/Speakers, then you will need a network connected device to feed the DAC. That’s where a uRendu or UltraRendu comes into play. This provides a Roon Ready compliant network connection with a USB output.
If you are co-locating NUC and DAC and connecting them directly, then a Asynchronous USB is best - asynchronous connections are not reliant on a clock being part of the signal, and it is ‘recovered’ as received - this eliminates jitter (any different between the clock when it was transmitted and received).
If you are connecting this way, then there maybe an addition benefit from a cleaner power supply than the Switched Mode PS supplied out-of-the-box with the NUC, but this is very dependent on the rest of your environment and sensitivity of your DAC and Amp to any RF EMI.

Although an Allo based RPi solution are reported as good, you need to determine whether moving away from USB connections to use the S/PDIF input on your DAC is going to give better SQ.
Also the Allo solution is based on a commodity general purpose computing platform, in the RPi and this could introduce electrical noise in your signal path.
Another words there is no simple straight forward answer or solution - you need to determine what your requirements are, in terms of placement/separation of the NUC to the DAC, and if so, what connection method is best for your DAC.

How about this FS: Allo Usbrige Streamer dietpi on sale from a Forum member.
This would provide a good networked USB output, allowing the separation of the NUC from the DAC.

The store said there will be jitter/clock issues with the RME ADI-2 DAC ?

That’s one of the best performing DACs (objectively) on the planet and jitter is not an issue with that DAC. Even with it’s TOSlink (optical) input.

Agreed. I have been using a variety of RME audio interfaces plugged directly into high performance PC or mac audio workstations with no issues with noise induced from the host computer - and this is for acoustic and vocal recording where it is absolutely critical there are no such issues.

A device such as the microrendu is useful as an ethernet to USB adapter for a DAC and I believe it is Roon compatible as well (or at least they have a Roon mode on it). TBH however I would have no concerns about plugging an RME ADI-2 DAC directly into an intel NUC running Roon core if such were convenient. Otherwise if you need a network DAC adapter, then there are some other choices both cheaper and more expensive.

TBH, my greatest hesitancy with these RME DACs would be plugging them into an Arm32 based device just because I know of a user who has experienced the occasional click when starting playback on a raspberry PI and many of these kind of network devices are very similar with similar software. I am not saying you will have a problem, just there may be a risk.

I don’t think a jitterbug will be required or make any difference, however they are relatively inexpensive. I have one temporarily between my intel NUC running Roon core and a pro-ject S2 digital. I am not convinced I can tell any difference either way. I actually bought the jitterbug for a different use where I definitely needed some noise filtering, but just tried it here out of curiosity.

@simon_pepper thank you for the detailed explanation. Not it all makes sense.

Also what is a arm32 based device

After your explanation I don’t think I need this because I live in a studio apartment and can’t really separate the NUC and the DAC.

Ok, so just a good USB Cable - I can recommend those from ‘Curious Cables’ https://curiouscables.com/

Arm32 is the processor architecture used in some Single Board Computers (SBC) such as a RaspberryPI.
The 32 refers to a 32-bit architecture, whether internal to the CPU, the Data or Address bus.

I would recommend a USB 2.0 spec compliant cable… This Tripp Lite has two built-in ferrite chokes which would also probably mean no need for a Jitterbug (tackles similar thing - RF).

I still have the original version microrendu and it works great. It’s connected through an ultra digital so it outputs via I2s and SPDIF…Sonore service is always been good, as has been Small Green Computers.