I regularly get notification of “Lost connection, trying to reconnect” on ALL endpoints about once per day that are connected to roon simultaneously. The entire music library is on the local hard drive of the roon core device, and both endpoints (or more if I have any connected) all happen to drop out at exactly the same time. There is no sign of any update happening on the device at the time and the Intel NuC roon core machine is otherwise idle. It usually returns in about 5 seconds, but by that time the music has stopped.

There was a discussion about the memory history, which slowly builds up over the day and only a restart allows smooth further enjoyment.

Is the behavior new with you?

Yesterday some were happy that now everything is much smoother and faster and suspected Roon had improved something (automatic restart?)

No, this behaviour has been happening for as long as I’ve had Roon I’m afraid. Initially I thought it was a network connection problem, but then I put all the music on local storage and the problem persisted.

Hi @Con_Kolivas, are you able to access the Core machine outside of Roon during this time? Is it just Roon that drops or is the entire device becoming unavailable?

Thanks for the response, sorry about the delay as I received no notification that there was a response (is there a notify feature in this forum?) The device remains responsive at all times, it is only Roon that drops out.

Hi @Con_Kolivas, you can adjust your notification preferences by going to your profile and choosing Preferences: 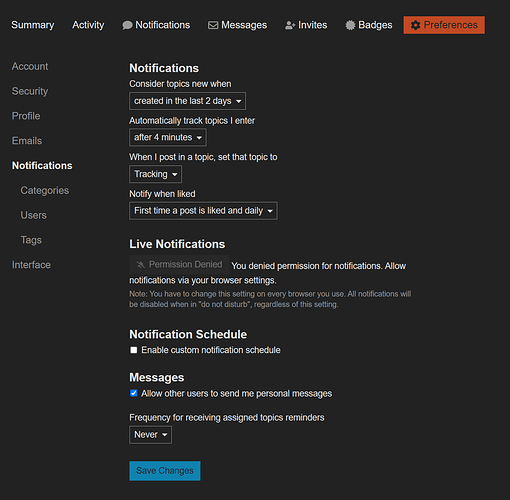 Please note the exact local time + date when this issue next occurs and the name of the track that was playing and upload your Roon Logs by using these instructions. The best way to get them over to me would be via Dropbox / Google Drive, but if you don’t have either service please let me know and I can provide alternate upload instructions.

Thanks! I’ll keep a close watch on it.

This reminds me of the known problem with NetworkManager:

Roon doesn’t get on nicely with NetworkManager which manages network devices and connections both on Ubuntu Desktop and Linux Mint. You have basically two options: If your Roon core runs on a headless Linux server, I would simply install Ubuntu server which doesn’t suffer from this problem. I have done so myself. The other option is to reconfigure your Linux so that it doesn’t use NetworkManager to manage network devices. Instead it can delegate to networkd which is default on Ubuntu Server. P…

PM sent with link to google drive logs after a lost connection.

Confirmed the problem occurs precisely after Network Manager Script Dispatcher Service is executed. Roon actually crashes. This does not happen with every execution of it, just about once per day.

Going to try the “configure and quit” option in NetworkManager.conf since this device never changes to see if it fixes it, but Roon should NOT be crashing anyway.