Yesterday Quiet Places by Andreas Vollenweider was released. It had been showing in Roon for months but as unavailable. Sourced from Qobuz.

Now that the album is released the Qobuz source remains unavailable. Even though it is available in my Qobuz app.

I can also play the Tidal version fine. So would not have been an issue but that the Qobuz version is higher res here.

Any idea how this can be fixed? I assume it is marked as unavailable in my library and has not refreshed. 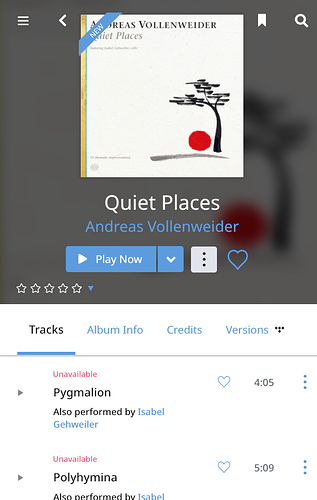 Qobuz and tidal bundle releases, add the extra roon metadata and then ship them across. So this sometimes leads to a delay.

If you have added this ´prerelease´ album to your library, unfoftunately Roon does not update the tracks status automatically when they become available.

I just delete the album in Roon and prefer it again in Qobuz. The newly added album will show the tracks available.
I have not yet found any other way to ´update´ an a prerelease album.

Ah that would make sense. Thanks!

I thought I directly queries the Qobuz and Tidal APIs.

Wait this is what I was thinking as well now.

Had trouble accomplishing this via the iOS interface. Will try on computer later. Thanks.

Thanks man! That worked.