So I really can’t stand the Tidal interface, but I use it at work because I have Roon installed only at home. One small detail I like on the Tidal app that I don’t see using Roon on certain titles is (Remastered) listed on the songs.

For instance, on “Foreigner - No End in Sight, The Very Best of Foreigner” you see (2008 Remaster) listed after each song. When looking at the same album in Roon, there isn’t any notation on this. I’m just curious why that info is missing, it seems relevant. Here is a couple of screens showing it. 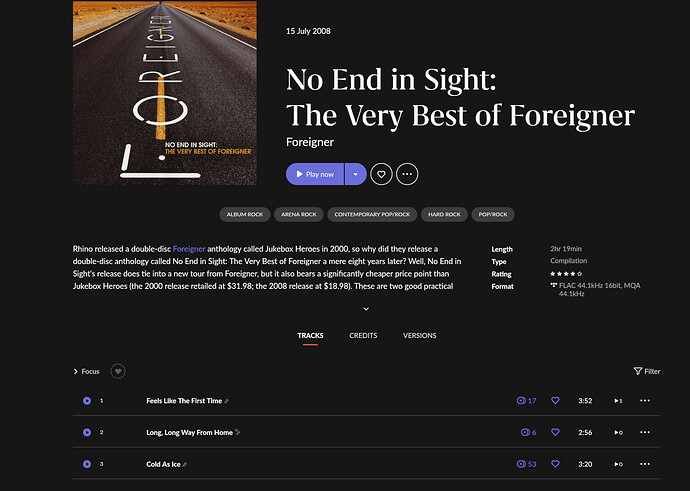 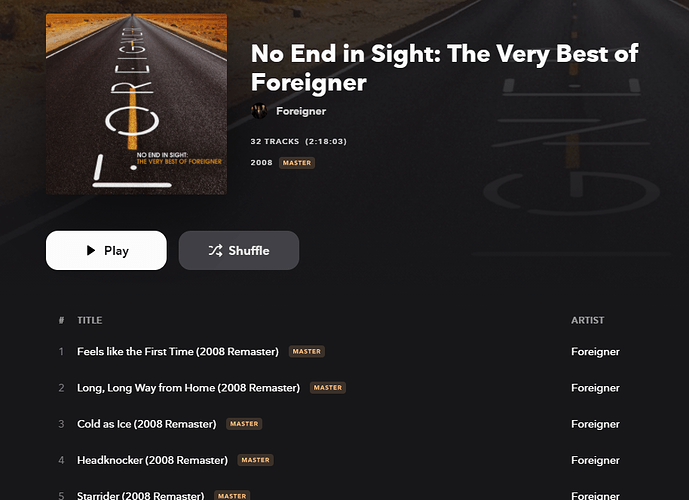 I see you have multiple versions available…are you confident it’s not one of the other versions in your collection?

Hi Chris, do you mean “Master” or “Remaster”? Or am I missing something?

Historically we’ve done this to avoid a whole load of rubbish-y track titles from streaming services on many releases, but time has moved on and we know that we can do better with the tremendous number of remixes, re-masterings, and bonus track albums which are out there now.

Note that, in the context of a track’s album, we really wouldn’t want to have the same (disambiguation information) as part of the main track title (in the same font) for every track in the track listing; we will do better than that. But also note that Playlists and Roon Radio have different contextual requirements: in isolation, that (disambiguation information) is important.

No promises about when this might change, but it’s definitely something that we want to do.

Sounds promising Joel, thanks for the response. It is a minor issue, and I agree it’s redundant to have that in parantheses on every track. It would make more sense to just list it once.