Even after changing to static channels on WiFi I still get glitches in connection with my Iphone 7. The Ipad Pro is performing better but also still glitches.

Any more ideas?
Thanks,
Sjoerd

You may wish to consider the discussion here - iPad Roon Remote Loosing Connection Every 30 sec [Resolved] - and look at the firewall and remote settings within windows, the last windows update may have had a impact on your network configuration.

Thanks! I saw that Roonappliance was permitted in my Bitdefender firewall, but Roonserver was not. Let us see if this does the trick. Windows firewall is disabled by the way. I use Bitdefender 2017 including it’s firewall.

Thanks for the heads-up on this problem!
Kind regards,
Sjoerd

No, no luck there… still glitching.

Music is stored on a QNAP Nas with 4 disks. Nas is dedicated for this storage only.

Using Asio4All to stream 6 channels to the receiver.

No firewall on NAS or Netgear and no restrictions of any kind.

Bitdefender firewall is set to not bother with:
RAAT
Roonappliance
Roonserver 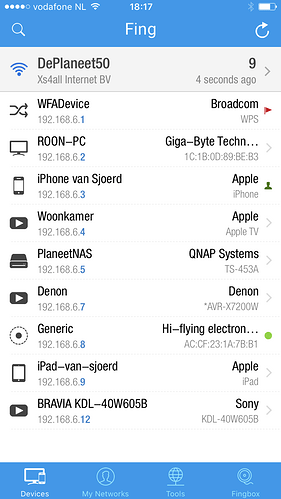 As a test have you tried disconnecting all other devices from the network?

I will try that now and will report back.

Let’s call on @support to help you out.

Hi @Sjoerd_Smits ---- I see from your previous post that you created security exceptions for Roon appliance and RoonSever, how about RAATServer?

@Sjoerd_Smits ---- Thank you for confirming that for me. Besides the router you’ve mentioned, do you have any other networking hardware in place?

Furthermore, have you tried reinstalling the application on those device since you noticed this behavior?

Hi @Eric, I re installed about 3 times after every change, just to be sure. Same goes for the IOS App.

Internet comes in by use of a FritzBox. But it is not the DHCP server, that task is done by the Netgear.

Right now, nothing else is connected other than my Iphone, the Roon PC and the NAS. The rest is off and/or disconnected.

Could it be the Netgear???

Hi @Sjoerd_Smits ----- Thank you for verifying that information for me!

Can you confirm the model Frtizbox you are using? 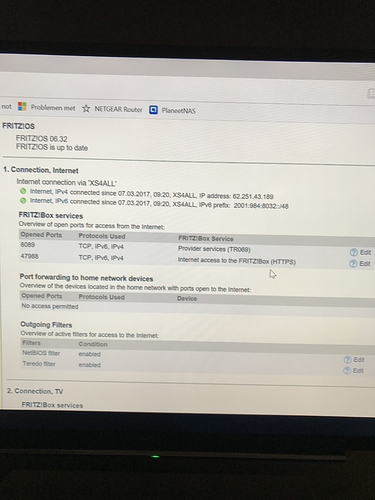 Hey @Sjoerd_Smits - can you describe the symptoms you’re seeing a little bit more?

Does the iPhone lose connection when it’s open and actively being used, or are you just seeing a reconnect when you’re switching back to Roon?

The Ipad Pro is performing better but also still glitches.

Can you elaborate a bit more about what’s performing differently between the iPad and the iPhone? Thanks!

What I see is, used or on pause, constant loss of connection with the core. Sometimes just a glitch. In that case the page returns where it stopped. But sometimes more than just a glitch and page goes back to “A” when I was browsing " Q"

When changing settings and glitching, it allways comes back “not in settings”.

This is the same for Ipad and Iphone, Ipad is just faster.

And this happens when you’re actively using the Roon app, right? It just suddenly disconnects, even if you’re not sleeping the phone or switching to a different app?

Does this happen regardless of your wifi coverage? That router should be solid, but I’m wondering for example whether things are any better if you’re standing right next to the router, as opposed to being on the other side of the house?

It is completely random. I even chose a wifi channel that was not present here in my neighbourhood. Wifi is solid and strong. It does not matter where I stand. Even in the back of my garden.
Note that audio playback is not affected.

Is your “cast to device” options under windows enabled generally including firewall settings? Check the inbound and outbound rules within your network - I spent hours on mine eliminating each issue before getting this to work.