You can go to the play history and delete them there, which will also remove them from the histories on the Home screen. I did so after running-in my new speakers to clean it of hundreds of hours of plays of the same few albums. I’m not at home right now, though, and can’t remember the exact location in the UI

Edit: Found this in an old post about the play history. I think it is still in the same place in the side bar? 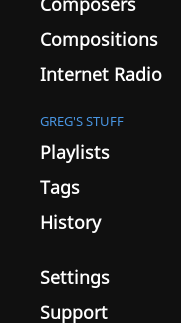 Thanks for the reply. Unfortunately I have tried these steps. I have removed all items in my play history yet the home screen is still showing previously played albums. I have also cleared the cache in the client as well and restarted the core but no change. I thought it was the Windows desktop app but it occurs on mobile apps as well.

Hmmm, no idea. Like I said, I did this and they disappeared from my recently played statistics on the Home screen. But this was half a year ago, so maybe something broke.