There is broad agreement on this point over here. We’re trying to figure out an alternative design.

Thanks brian. Another related issue/feature request - can we make it so that the focus box disappears or at least is significantly minimised, if the user wishes? I have been trying out the ability to use the “focus” feature and then to save results as bookmarks - which is great. I did this for my compilations, so with 2 clicks I can see all my compilations. However, the thick focus window stays at the top when I am browsing, which I don’t think looks right and is not necessary. Any thoughts?

I’m not sure which window you’re talking about here @extracampine.

The top area, which is the “shopping cart” of selected criteria, will be redesigned for a future release. As Brian mentioned, we’re all in agreement that this design needs to be a little more subtle.

As for the Focus panel itself, we may revisit the design of the focus popup in a future release, but it’s a delicate balance, since there’s so much functionality there people need. This will likely always eat up some screen real estate while you set your focus, then it can be dismissed for browsing.

Thanks mike. To be clear - I’m not talking about the focus panel itself. As the focus panel only appears when you’re picking your focus parameters, it doesn’t matter too much about the size or what it looks like, as it disappears again.

I guess that I was referring to the top “shopping cart” window as you put it. I’m glad that it will be redesigned - though what I think would be good would be if it could be minimised or something so that it is not always there when you are browsing your music after having narrowed it down using the focus feature.

It’s funny, that was actually one of the biggest complaints we had about the Sooloos interface!

On the Control, we didn’t display the parameters of your focus in a prominent way while browsing. What would happen is people would focus on Jazz, then spend an hour pulling their hair out trying to find a Rock album they know they own!

Even as the team building the product, we would frequently get tripped up by this, so we’re pretty determined to make sure users always know what state Roon is in.

And again, we agree that the current design went a little too far, both literally and figuratively

Haha, interesting to hear! Can’t please everyone all the time…

Definitely agree that the user must have some clear visual indication that they are in some kind of focus mode - but even a prominent icon or some visual cue would be able to do this, rather than having the focus window open all the time.

Just to reiterate the above. I’m starting to use more bookmarks which use various focus parameters - and when there are a number of items to the focus, the focus box becomes really big and distracting. Would be great to be able to hide it or have it much smaller.

If the user is using a bookmark, then Roon should show somewhere what the bookmark is, and not all the focus rules used to create that bookmark.

I for one would not vote to have the tags disappear from view. Like Mike, I would definitely stumble upon this, and I just like to always know precisely what it is I am shown. If the selection is reduced via filters than I want to see those filters (the Tags) at a glance.

Maybe make it an option. If it’s a bookmark, then the bookmark will serve as the reminder to the user. If it’s a new focus that has not been bookmarked - then I can see the purpose of keeping the focus criteria at the top. It would still benefit from being made a bit small/less obtrusive - and definitely remove the overlap of the focus window and the album covers.

Hoped this would have been fixed in the new build but it’s not: 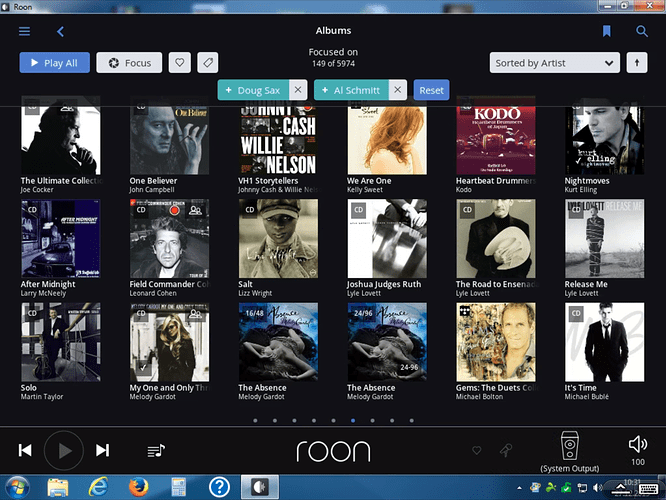 Yes, it hasn’t been redesigned yet. Some other things (RAAT, HQP and Squeezebox) have had priority. The introduction of further icons, which the results screen masks, is an additional argument in favour of redesign.

I’m no designer, but I wonder whether giving the “Focused on” count text a hit box that can toggle the Focus criteria and margin would work ? Having that text displayed is a pretty good prompt that you’re not seeing your whole library. Preserving the toggle state by search would let the user decide when they want to see the criteria and when they don’t. The hit box might have a generic title like “Criteria” when no bookmark is set and the name of the bookmark when one is.

I’m no designer as well. But just making the text “Focussed on…” more prominent with the possibility to show and hide the focus criteria would be worth a try. In case the criteria are shown the overlap can remain as the user pays attention to the criteria rather than the album results at that moment.

Hi @brian, any further thoughts on the overlapping focus buttons (once focused)?

In the short term is it not possible to make the covers slightly smaller so they re-draw below the reset button etc.

I also remain keen to have this aspect improved. The focus feature is great, but once focused the bar at the top remains far too obtrusive.

We have not come up with a good alternative design. Resizing the covers doesn’t quite work, because it could change the number of covers on screen if your screen size is near a transition point. It’s a very tricky problem.

@mike, lets make sure this gets revisited.

Would there be a way (i.e. a button, I guess) to hide the overlay once the focus is enacted? If the overlay could be hidden, then maybe no re-design necessary…

I don’t see the logic in resizing the covers - it’s the focus bar that is the problem - not the covers, which we want to see!

@trtlrock - I would suggest a much more minimal overlay or even an icon or two, to remind the user that they are in focus mode, lest they forget…

But no “button” to enable this, it should be automatic.

See screenshot, the top of the Album artwork is under the top banner - this doesn’t look right. 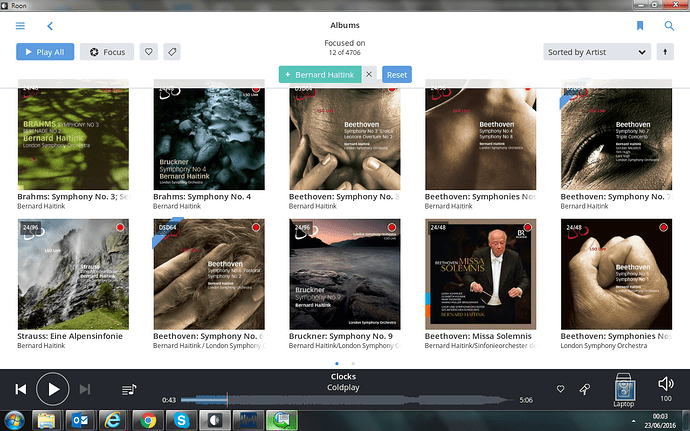 only happens using “focus”, as top banner becomes higher. I’m confident it will be fixed