I currently have a significant amount of duplicates in my library. I went to tracks, opened inspector where I’ve seen the duplicates tab, just tried multiple times the duplicate option is gone as noted in the photo. 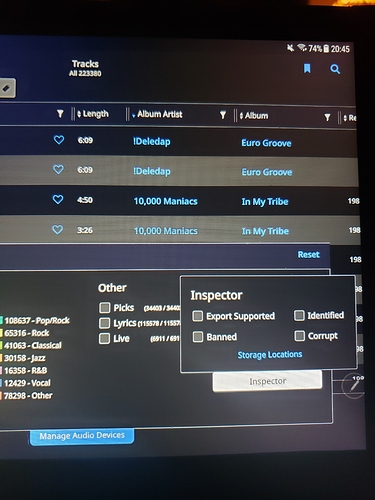 Is there another or better way to identify duplicates and edit some or all at once? ?

Duplicates only appears in playlists.
Post a screenshot of your roon, settings, storage.

There are 3rd party applications that can help.
Mp3tag can be set to find duplicates via tags.
Songkong is more sophisticated
http://www.jthink.net/songkong/duplicates.jsp#:~:text=SongKong%20can%20find%20duplicate%20files,the%20songs%20will%20be%20deleted.

I actually did this last night and was shocked at how many duplicates I had left around as I had tidied up my library.
I found it (by accident) under Album’s, focus and then inspector.
I assume you have gone in under a different place so you are not seeing the same options as your screen shot looks very much smaller

Good point that it can be done at album level which might help.

Ged I did not see your reply when I replied or I would not have bothered.
But I stumbled upon this last nigh and it really is a hidden gem of a feature