I apologize in advance if this has been discussed.

I want to hear thoughts on if what I have done with my defective nucleus so far and if any think it will it cause problems? I bought my nucleus in December and because of terrible, uncharacteristic snow storms in the Seattle area it did not arrive until mid-January. By the second week of February, the nucleus failed to discover the database or any network connection. I tried everything within my technical prowess to remedy the situation and I knew it had to do with a corrupt SDD card. Rather than post back and forth on the forums logs that would bring answers I already knew leading to a result I already knew (I needed a new SSD card), I decided to just install ROCK on a new SSD card and run my Nucleus as a ROCK. It’s been working fantastic as an endpoint and my ecosystem recognizes the “nucleus” as an additional “ROCK”. It doesn’t have database backups and it isn’t ran as a core – that’s reserved exclusively for my NUC10 that I run as my core.

Now I don’t see any problem personally. If anything, the nucleus is just a powerful endpoint. I’m wondering what anyone else thinks of this repurposing? I mean, I only bought the intel3 version of the Nucleus to begin with, not really thinking, when in reality I have over 265,000 tracks and 16,000 albums. So making a super NUC ended up being a better idea. But repurposing the nucleus… it’s essentially a glorified NUC dressed up like a supermodel anyways, right? I should be okay? 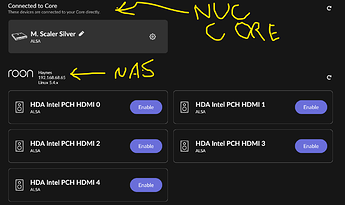 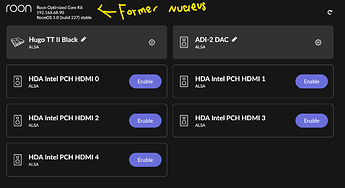 it’s essentially a glorified NUC dressed up like a supermodel anyways, right?

I should be okay?

Maybe, but, also maybe not. One of the OS differences between ROCK and the Nucleus, is that the Nucleus OS manages thermals by throttling CPU, it is not all handled by passive case cooling as with an Akasa case.

ROCK does not have the code to do this, as it is relying on the BIOS to manage fans in the normal case.

After that, provide the Nucleus serial number and proof of purchase to support, they can then help you install the Nucleus software.

if any think it will it cause problems?

If you choose not to turn it back to proper Nucleus software, you will likely have problems selling it in the future. The other downsides are losing Nucleus thermal management as Rugby explained, and automation feature (in case you use it).

As an endpoint, the CPU load will be very low. Thermal management is a non-issue IMHO.

I don’t see why I would have any intentions of selling it. That requires effort.

Ultimately I don’t think fixing it so I can use it as a Core again makes sense. I built a ROCK with specs beyond the Nucleus+ for less than the entry level Nucleus. As I mentioned, my library contains over 265k tracks not including my lossy tracks, and I was an ignorant noob when I found out about Roon. I thought you HAD to have a Nucleus and didn’t understand the difference between the Nucleus and Nucleus+. Even if I fixed it, I’ve realized it won’t serve me given my library. I was ignorant.

And I have no interest spending time selling a product I have no faith in to someone. Once I have the necessary trust level on here, I’ll be excited to start offering up a lot of the high-end gear I have come to trust QA wise and know how support is just 5 minute email or call away if needed.

I’ve used a rev a nucleus with 12gb ram and 128gb m.2 ssd (replaced and cloned from the original SATA one before as I thought it would fail sooner or later anyway) and it’s the i3 …the 12gb ram 4+8 Sodimm’s is what makes the difference -and I have a 330k track library…it’s run fine for years like this, as long as you throttle any analysis to less than 2 or less cores

Maybe there is hope then. I won’t lie, I like the beauty of the thing and if it can work and handle my library then great I’ve built an excellent ROCK I’m sure someone would love to have.

For future readers, I was able to convert Tyler’s ROCK installation back into a Nucleus. Please contact us if you need this done for some reason, as you are missing thermal management software if you install ROCK directly on your Nucleus.

Wow - VERY grateful and impressed by the haste!!! Well it’s been fixed, and quick at that. Now that’s working I think I may put it to use after all. Been considering converting my husbands surgical clinic over to Roon instead of having @lex@ in every room! Time to get our old one doc practice even more modern haha

The Nucleus are damn sexy chassis I must say…I got one just for the look as an endpoint, but now that I upgraded it to more Ram and faster SSD M.2 It can be used as my core backup…which is now on Windows on a 10700 -7 cpu and 32GB ram, its also got 2 internal drives for the 16TB of tracks

which I would have to think about where to have in the event I have to backup to the Nucleus…first world problems.

Is the Nucleus case a custom part for Roon or is it available online?

I am nervous I might be on my way towards becoming an early age deaf audiophile because I have never been able to hear my NUC, ever. I’m not trying to be an Olivia-One-Upper or one who negates what someone says just for the sake of negation or anything, gosh those kind of plastic gals are SO annoying. But in all seriousness… I think I’m 33 and deaf. I’m just going to convince myself that my NUC is as comparable to my Nucleus sans the clever marketing and audiophile-aimed packaging, just to calm myself.

You may also have a cool room, or not be driving it hard, or just have a high noise floor in the room itself that drowns out the sounds. All are perfectly normal explanations that do not require you to go straight to biological malfunction!

I’m just going to convince myself that my NUC is as comparable to my Nucleus sans the clever marketing and audiophile-aimed packaging, just to calm myself.

It is comparable. The point is pretty chassis, no fan, and turn-key. That ROCK + NUC you set up involved steps that the target customer of Nucleus is not wanting to bother themselves with due to lack of time, interest, or expertise.

Thanks - now I feel like a cool Roon Dood! Excellent start to a day.

And my repurposed Nucleus was fixed back to a Nucleus in an instant. It was so simple. I felt like Harry Potter as it was taken care of for me so quickly. Thank you. I forgot to say that.

I think I’m going to use it to introduce the Roon ecosystem into my dental clinic since I have the Nucleus again - and it is a fine piece of equipment at the end of the day. I have 3 surgical suites, a staff room, front office, and my office. If I remember correctly, the Nucleus can handle 6 zones, so that’ll work well! Thanks again. The staff will love Roon and building an employee music library!