This album of arrangements by Anne Dudley lists “Seriously Chilled” as an artist(!). It also misspells “New Age” as “NewAge”, and has “Electronic” listed as a genre - there are no electronic tracks on the album (unless of course, the presence of an electric organ makes it so). I also think that it should not have “Various Artists”, but rather “BBC Concert Orchestra”. 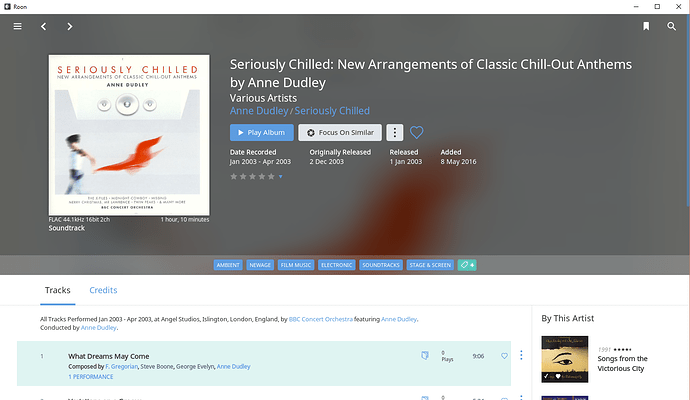 EDIT: Whoops - just discovered there was a Style tag containing the “NewAge” typo - so deleted that from the metadata. The rest of the points remain, though…

@Geoff_Coupe Geoff, this is now resolved. The primary artist is now “BBC Concert Orchestra” and vapour-band “Seriously Chilled” has gone

The “electronic” genre is there because Anne Dudley has a quote on the back cover about how she arranged music to fuse modern symphony orchestra with the loops and beats of contemporary dance music.

@joel - many thanks. I can’t help but feel Rovi is stretching it a bit, giving this a genre of “Electronic”. What Dudley actually writes on the CD is: