The credits at the bottom of any lyrics (or a lot of them) appear to be shifted by one. The lyrics match the track but the credit appears to be for the previous track. I’m sure it must have been already addressed as it’s pretty obvious…at least on my core and Android app. Thanks

Someone else has noticed this!

Definitely a glitch someplace but it happens often.

Tom: thanks for backing me up. I just want to make sure that someone other than Leonard Cohen gets credit for Hallelujah!!!

Yes. I noticed it a few months ago when an older songwriter (Cole Porter?) was credited on a recent pop song. I thought it might be a licensing legality. Like maybe the Cole Porter estate bought rights to a recent song.

There’s also a glitch in the copy of some of the artist bios and album reviews. Some of the text - maybe a line or two - gets repeated at the bottom of the writing.

I am new to this kind of crowd-sourced tech support and don’t want to appear like a complainer. Furthermore, I had other, more crucial tech issues so I figured it would be picked up by someone else or fixed in a later version. (Or it was only happening on my setup.)

Yours is the only other comment I’ve read about this. Could have been others but I haven’t seen them.

As somebody mentioned to me in another forum, this is definitely a first world problem. (Unless I’ve made a wager on some song credit and use Roon as the deciding authority. Then, by God this is criminal negligence of the first order.)

Good pick up. I’ll see if I can find some on my library, if you could post a screenshot or two I’ll get a bug report started.

The repetitive text in the bios and reviews is a known issue Tom, but it’s been known for many months and hasn’t changed so I will chase that up also. It seems to occur semi-randomly but often before a square bracketed passage.

Andrew: here is a song by Elbow which has lyric credits for what appears to be the band 311 (of which of have no recordings at all!)

The best place to see this issue is withh an album which has all different songwriters…credit shifts by what appears to be one and the last song is shifted to another recording altogether.

Thanks for looking into this 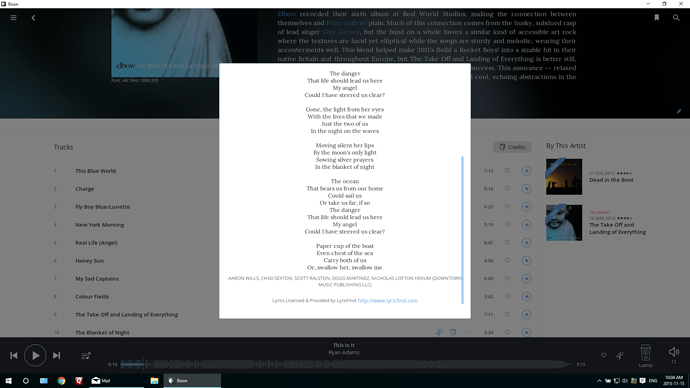 I see this all the time and I’m glad someone else too the time to explain what’s happening. Thanks!

Yep, I’ve reproduced this and a ticket has been raised for a fix. Thanks David, Tom and Chris.

A fix has been completed and will be included in the next build released.