[resolved] The Tragically Hip "Trouble at the Henhouse" metadata errors

See attached. There is no such band called Tragilath yet there is a main artist tag? 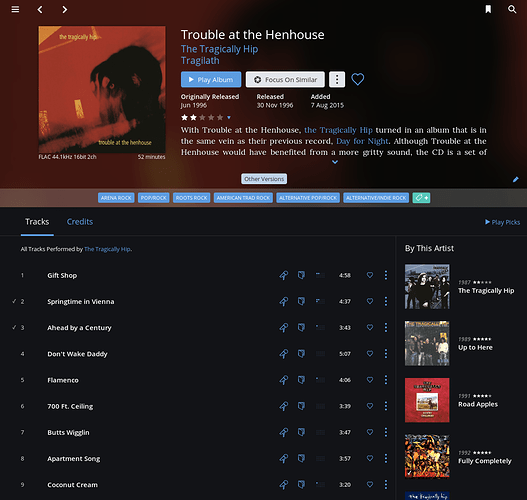 If you look the album up on AllMusic you’ll see Tragilath is credited. Might need to get out the liner notes to see why.

I have, no mention anywhere… It’s an error on the part of allmusic and then by Roon.

I reported the error months ago, it was confirmed as a mistake, told it would be fixed.

All metadata issues I’ve reported have never been fixed, you’ll most likely have to just live with it. I don’t think Roon’s metadata provider cares or has any interest in fixing things.

Continuing the discussion from "The Tragically Hip" "Trouble at the Henhouse" also credited to Tragilath?:

I agree, they like to talk a good game but nothing EVER gets fixed… this and how horrible the the radio feature is are the only two things that drive me nuts with Roon.

Resolved in the metadata service on 01-Aug-16.