Restore taking ages - how can I tell its working?

I just rebuilt my Win10 NUC core with ROCK, which was a nice smooth build. However, trying to restore from my Roon backup is proving to be problematic.

I kicked off a restore yesterday morning & it’s just sat there for 24 hours with no visible effect in Roon itself. Still no playlists available, no tags etc.

There’s no indication of how the restore is progressing, or whether it’s working at all. Should it really take so long? I’d also like to see the ability to restore particular aspects such as playlists on their own, which presumably would be very quick.

That ain’t right. Unless you are backing up from a poorly performing cloud service you should be done in tens of minutes to a couple of hours depending on the size of your library.

Hmm that’s what I feared. On the other hand, I can see network access upstream from the backup source (my PC), though it’s only transferring at a rate of around 280kB/s (gigabit local network), which is going to take an age considering my backup folder is 11GB! Incidentally, this does seem enormous for a backup of around 4500 tracks.

I’d appreciate a view from @support please on whether this is all normal behaviour? I’m really concerned I’m going to lose all my custom config that I’ve built up over the past couple of years. Thanks.

[quote=“pedalhead, post:3, topic:26901”]
11GB! Incidentally, this does seem enormous for a backup of around 4500 tracks.
[/quote]That does seem a little large, compared to others see:

For comparison: I have 2300 albums, 30k tracks. I set up a new backup job, over wifi to a Windows share. The initial backup took 45 minutes, an incremental (with no changes) took less than a minute. This was over wifi. Objects is 2 GB, each Backup file is 3 MB (and so were my previous backups for the last few months).

I explained the structure of the backup folder here:

That’s not the whole story… The Roon backup comprises of two main folders: …\RoonBackups<backup id>\backups …\RoonBackups<backup id>\objects The backups folder contains time stamped files that describe how to restore the data from the objects folder, to be able to restore the Roon DB to a given point in time. The objects folder contains the actual data that is required to be restored. This includes everything that is in the Roon DB, so that upon restore nothing has to be re-downloaded from…

What is the size of just objects folder in your back?

Thanks for the reply @Carl . My objects folder is huge…>11GB 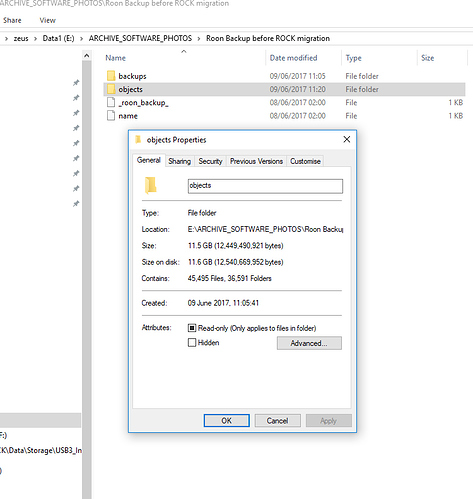 I’ve got a list full directory listing of /objects but it won’t let me attach it to this post (wrong file type).

Many thanks for looking into this for me.

I once found a large backup because I had set up the backup file to be part of what was backed up. So for every backup, the size of the backup doubled.

My Synology NAS has a really bad sync utility that once caused that effect too. I had four six-TB drives, and the 24 TB filled up…

So take a look in the directory…

Oops, I realise I mis-typed earlier. I have around 4500 albums, not tracks

. Approx 53k tracks. Still, my backup sounds way too big compared to others.

@AndersVinberg - thanks for the input. I don’t think I’ve been backing up the backup, but my objects folder does have 109,775 subfolders! Bonkers.

Yeah, something wrong with mine. Hopefully @Carl & @support will be able to get to the bottom of it

Hi @pedalhead ----- Thank you for the report and more importantly the feedback, both are very appreciated.

Moving forward, we would like to have a look at your logs to see if we can determine what is causing this behavior to occur. Please follow the instructions found here and dump us a set of logs.

Thanks for helping out. I’ve zipped up my logs & stashed them here…

Hi Mark (@pedalhead) ---- Thank you for the follow up! Confirming that I have received your logs and placed them in our queue to be evaluated by a member of our tech team.

Once the team has completed their analysis, I will be sure to provide with an update containing their thoughts/findings. Your patience is greatly appreciated!

Hi @pedalhead ---- Thank you again for your patience while our team has been looking into this issue for you.

As per the request of our QA department, do you have a Linux or MacOS machine where you can run a terminal command from?

Hi Eric. Well, I have a couple of Raspberry Pi’s running Linux, if that counts? Everything else here is Windows.

Hi @pedalhead ----- Thank you for your patience and my apologies for the slow response.

Moving forward, our tech team has asked me to have you please perform the following: 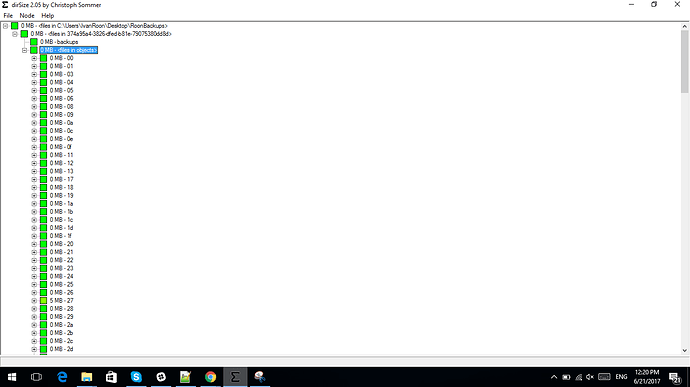 Thanks Eric, here you go…

Thanks for the follow Mark (@pedalhead)! Very appreciated! Passing back over to my techs for evaluation. Once they’ve given me some more feedback I will be sure to follow up asap.

Hi @Eric I know these things take time but is there any sign that I’ll be able to get this restore working? I’ve been running with a really messy database for more than three weeks now & if it’s not possible to fix it I’d rather just crack on & spend some hours (days?!) fixing the new database. Thanks.

Hi @pedalhead — Thank you for your patience, while the team has been evaluating your report/provide logs.

Moving forward, based on the materials you’ve provided to us, our team believes that the reason your backup is so large is due to the fact that some previously active watch folders were disabled after they had been analyzed by Roon. Thus the information about them is still being contained in the Roon Database.

Thanks @Eric. I’m getting 518 deleted files and zero for the other two. I did remove a number of duplicate albums before the migration to ROCK. Cheers.