I have had “Revolver” for years, on Roon. Suddenly, every song is identified as 2022 mix, but I never bought the 2022 remix! I tried to identify the album to rename the tracks, and was able to using the “Vinyl”. But why would Roon suddenly tell me I have the 2022 remixes?

One simple question
Is it in your local library or on Qobuz or Tidal?

Strictly local. I don’t subscribe to any online music services.

This happens occasionally, Roon often updates the tags in it’s db . Presumably this is the top of it’s Revolver list !

I’m off to listen Revolver , I didn’t realise they had done the ReMix , Sgt Pepper was a startling improvement

Ok that’s good as the Streaming services seem to swap them out sometimes. I have added the Tidal this morning but my original version is still there. 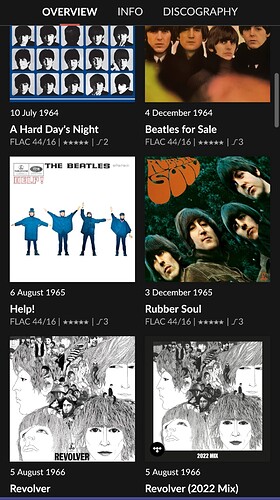 The Super Deluxe is in Tidal Roll on Rubber Soul

Well I listened on Tidal and I will be buying a high resolution version but I have them on CD and Digital and re-released versions.
Though I tend not to listen to the demo’s and out takes more than once so maybe just a deluxe rather than super deluxe

I hate remix albums in general, they add bonus tracks

You get to the end of a well loved album only to find it carries on with a couple of tracks that weren’t quite good enough to make the original.

Ah I rip them and flag them as disk 2 and 3 and then try to remember to only play disk 1.
I usually fail