Not really a feature request, more a product request.

I have an i5 NUC running Roon. It is strapped to the back of a touch panel. Both sit on a shelf next to my Stax T1 amp, and above my 818v3. All seems well through my DSPs, but now that I come to use them regularly, I find there is burbling through the Stax head speakers. I had put this down to the amp, and was ready to ship it off for repair.

Having noticed that moving cables made a difference to this noise, I turned off the NUC. The sound went completely. It’s all the NUC’s fault. (I also tested just turning off the screen, but that had only a small effect.) It is much worse when the screen-saver is running, but still unacceptable without it.

I’m quite surprised the NUC could make such a horrible mess of things, but there it is. I’ll have to make sure the Touchscreen/NUC is far from any audio equipment from now on.

Maybe it’s time for a dedicated Roon product, running Roon server and not giving any RFI interference? At least give us the option of the old Sooloos hardware model, perhaps?..

I’ve always gone with a music server and storage separated from my listening space and equipment. Streaming is to a barebones ARM based endpoint. Even hooked up to a headphone amp it’s silent.

Are your cables properly screened too?

*no absolutes, I am saying that noise is not apparent as you describe.

Just because the sound reduced when the NUC was off does not necessarily mean the problem was mostly the NUC. The act of turning it off stopped the NUC’s HDMI signal to the touchscreen, so the touchscreen began to behave differently, possibly affecting RFI that it was responsible for. To know with certainty that your problem is primarily the NUC, IMO you should get the longest HDMI cable that you can easily get your hands on, and see what getting the NUC a few meters away from any analogue audio device (or cord/cable) does to the noise. If it’s just as loud, then I think you can say with some confidence that the problem is not primarily the NUC, but may also be the touchscreen. Of course, it it reduces then it’s the NUC.

Another test - not for RFI, but line noise - might help too. Get a long extension cord for the NUC, and run it to an AC socket that is not on the same circuit as your audio system. If that reduces your noise, once again, it will be fair to blame the NUC.

Yep, @scolley has great advice, NUC is most likely not to blame.

Thanks for all the responses and the encouragement to find out more precisely what is going on.

Separating NUC physically is not practical right now, so I tried to isolate it another way, by disconnecting the monitor from power and monitor cable (at the NUC end). No difference to the noise.

Removed network cables and powered down hub. Also no difference.

I’m not sure if it’s pumping RFI into the 818 (at the other end of the USB), or radiating it to the Stax amp or the connecting cable. But either way, that’s what the problem is. With the USB disconnected there is no noise at all, so now I need to try different cables and see if I can stay connected without the interference…

All I know for now is the USB cable I unplugged is from Belkin. And it’s much much too long. I’ll simply try a much shorter one first.

Shorter is better, but a properly shielded cable should work up to 2m. @dbtom2 Cable brand is irrelevant, so long as the cable is really USB 2.0-rated.

Yep @evand, I think I knew that.

Still, I wanted to follow Ludwig’s noise remediation efforts because one doesn’t often get an opportunity in real-time to witness a fix. Is it ingress or egress? That sort of thing.

@Ludwig, if you have a ferrite core lying around pop it on the DAC end of the cable and see if it removes the noise. 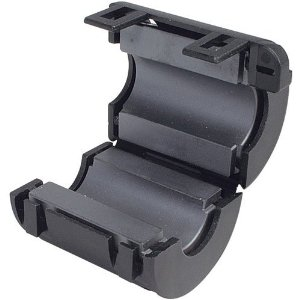 Blocking the 5v line on the male USB plug into the NUC can be a useful experiment. It’s pin 1 and usually connected to a red wire. Obviously can’t do this with a USB powered DAC but otherwise it can reduce power line transmitted noise. I used a thin strip of business card extending into the plug and folded down at the lip secured with a flyspeck of glue.

If you find that it makes a difference then cutting the red +5 wire can make the change permanent on an inexpensive cable.

If a problem disaapears by disconnecting a cable thats between devices it’s likely not RFI but a grounding problem. Try connecting any other usb device that is not coneected with the rest of the setup and see what happens. Still noise then it might be a RFI problem, noise gone, then it’s most certainly not a RFI problem. Check your setup for groundloops first.

just realzed this topic is allready 10 months old, so likely a bit too late.

Thanks but yes, it’s solved.

The NUC spits out some nasty stuff. Googling shows it’s a known issue. I no longer have anything connected to it by USB.

The dCS Rossini I now have in that room is in any case immune to the crud carried on the USB, which the Meridian 818v3 is not. But that’s all irrelevant now that the dCS is Roon-Ready and connected by LAN.