Rinaldo Opera: all the tracks are called the same

I have a strange issue with the Rinaldo Opera from Haendel (DECCA by the Academy of Ancient Music with Hogwood + Bartoli, Daniels).

It finds for all the tracks the same name “Rinaldo opera, HWV 7”. Even, when using the album editor and say that I want to use the file track names. The track names remain the same.

Going back between “Track Title” from Roon or File does not help either. 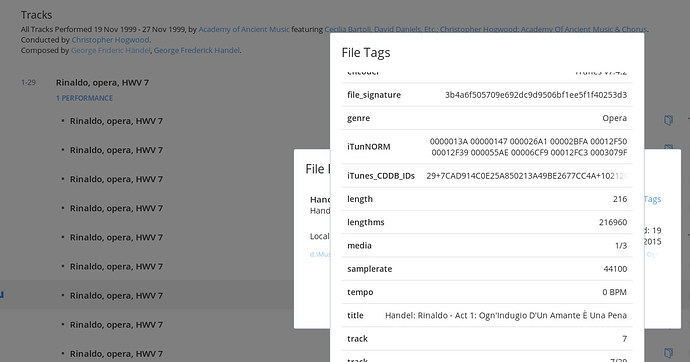 This might be an allmusic problem, as there the same naming can be found: http://www.allmusic.com/album/release/handel-rinaldo-mr0002737663

But still, why does it not let me take the file information.

Another strange thing is, when I perform “re-identify Album”, I see my track names and the split up by acts correctly. This lasts for a couple of seconds and is then gone again.

This happens for other albums as well.

You are right - Allmusic gives us bad titles for these tracks, that’s why they all are shown as ‘Rinaldo, opera, HWV 7’ - we will report that.
As for the second part of your complaint - that sounds like a bug which I can reproduce. I’ll make an internal ticket for that.
I guess for now it is better to leave this album as Unidentified.

Cool, thanks for the answer.

Hi Vova
It has been a long time ago that I reported this issue. I just want to let you know that it still does not work for this album. I am not sure if this is related because there are 3 CDs belonging to one album.
I am running V1.2 (build 147) on a i5 (6th generation) NUC.

It is even become worse, when I do this on my iPad, the roon application hangs and music starts to stutter. Loading the album takes about 20 seconds, saving about 30 seconds. And still it shows the track names from all music.

If you want I can give you a link to the files. Let me know.

Oh well, two years later, and I think this album is still problematic. Instead of being shown as one composition (Rinaldo, HWV 7), every track is now a composition (all 82 of them…)

Do I really have to add a WORK (Rinaldo; HWV 7) and a unique PART number to all 82 tracks, or can this be tackled at source? Thanks. 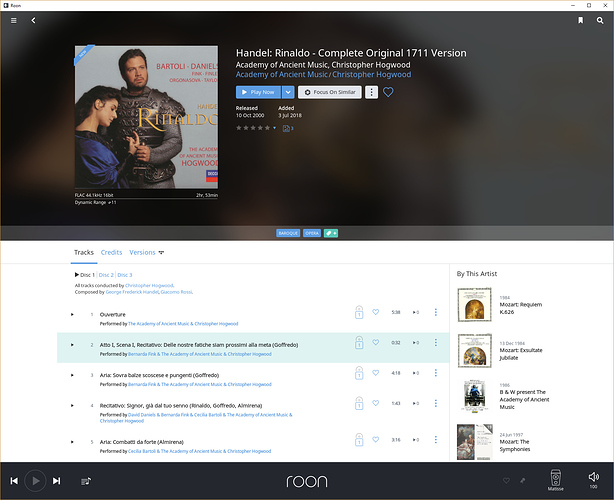 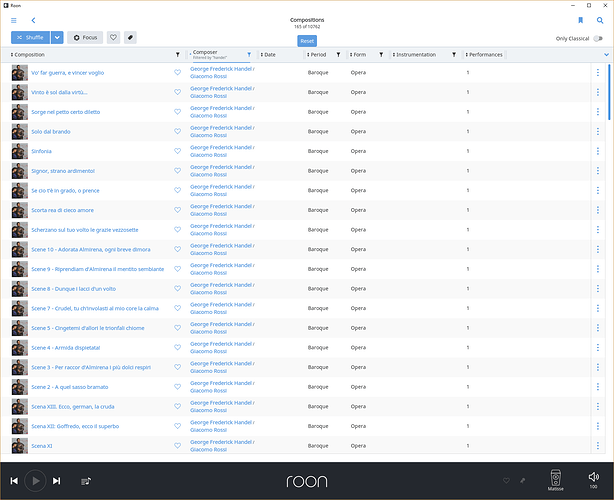