Australia lost its best blues harp player and a much beloved musician this week. Chris Wilson was simply world class, but chose to avoid the world stage. A gifted singer, songwriter and instrumentalist…

The Long Weekend is on Tidal (see below). You can see quite a bit on YouTube, including these:

Chris’s friend, Max Crawdaddy, broadcast the best tribute so far on his Thursday night show. Ten straight songs, commentary “I have no words”. Some great performances in this bracket. You can hear it here:

I first saw Chris live at the old Post Office Tavern in North Fitzroy in the late eighties. It was a Paul Kelly gig just after “Gossip” and it rocked. Towards the end of the show Paul said “There’s someone in the crowd who needs to be up here. Come on up Chris”. This big bloke with a buzz haircut three down from me, who’d been there the whole night just rocking to the music, picked up a little Jetset travel bag and walked to the front. He pulled out a blues harp, looked at Paul and the whole band just exploded to a new level. I think the song was Dumb Things. The crowd loved it.

I’ve seen him many times since. With Shane O’Mara (I think Live at the Continental is on Qobuz). By himself, with Crown of Thorns, on stage guesting with others. I never left any performance by Chis feeling less than awed. I bought every album he released and came to appreciate what a great songwriter he was.

Andrea loved Chris also since Harem Scarem and has the first Crown of Thorns EP (Gnawing on the Bones of Elvis) on vinyl. I was able to give her a signed CD of Flying Fish and a little print accompanying the last, percussive self-titled album. We saw him together a couple of times in Brunswick, strumming a guitar and playing harp by an open fire with kids sitting in front and the pub bursting at the doors.

When Chris announced he was ceasing to play to battle cancer, his tribute shows were very quickly oversubscribed, raising some much needed funds for his family and care. Musicians and fans alike loved him, you can feel it permeate his Facebook page. No one has a bad Chis Wilson story, He was a humble, quiet, talented and intelligent man who will be sorely missed. He sang about workers and unions when it was unpopular. He sang songs of heartbreak, despair, redemption and hope. He played the blues.

The Long Weekend is on Tidal: 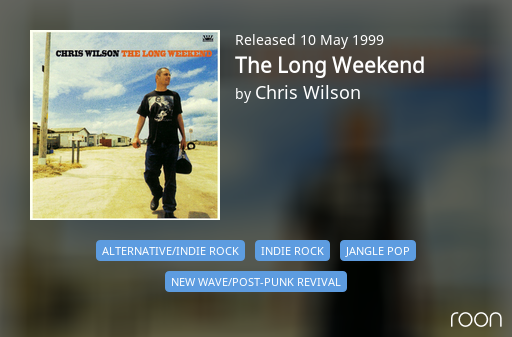 This is so much fun: