Only one problem, I can’t get DSD over toslink to work from Roon. I play from computer (Realtek ALC1150 chipset) and it does not support 176khz, so maybe this is the reason. I tried both native DSD and DSD over DoP. Maybe @brian can shed some light?

Yeah, that’s a limitation we see often on motherboard chipsets. No DoP without 176.4kHz.

Yeah, that’s a limitation we see often on motherboard chipsets. No DoP without 176.4kHz.

Annoying, is there no way to disable 176 in Roon so it does DoP over 192 instead? Or maybe there is some cheap PCI card with 2 channel audio and quality toslink out? (to much to hope for I guess)

The idea of DSD64 in DoP over 192 doesn’t make sense–the premise of DoP is that 176/24 has the same data rate as DSD64 + marker bits, so it’s possible to do a lossless synchronous encapsulation. If you ruin that data rate relationship, the whole idea kind of falls apart.

Oh well, so much for keeping it simple with toslink. Is anything simple in this hobby?

Hi,
just got the ADI 2 DAC and i’m wondering how I can play DSD Files to the Dac using the headphone output. There is no native DSD, only convert to pcm ond DSD over PCM which then can handle up to DSD256. How is the ADI configured the best for DSD Playback?
Thx

RME have their own forum for ADI-2 topics, perhaps that is best for these issues. Also, their guide is very good and available for PDF download. 17.2 DSD Direct is the section you are looking for, and it mentions "After activating DSD direct in the ADI-2 Dac’s menu… the analog signal is available only at the rear outputs, with a coarse volume control… Output P[h]ones and IEM deactivated. So you may want to use a separate phones amp for that pure DSD mode.

Only one problem, I can’t get DSD over toslink to work from Roon. I play from computer (Realtek ALC1150 chipset) and it does not support 176khz, so maybe this is the reason. I tried both native DSD and DSD over DoP.

If you really want to use TOSlink with DoP64 support, get one of these for USB-to-TOSlink conversion. It comes with USB 2.0 compliant cable and 2 x short TOSlink cables. I can confirm it passes DoP64 fine.

Some USB-Toslink converters I’ve had are fine up to 96kHz but fail the DoP64 test. 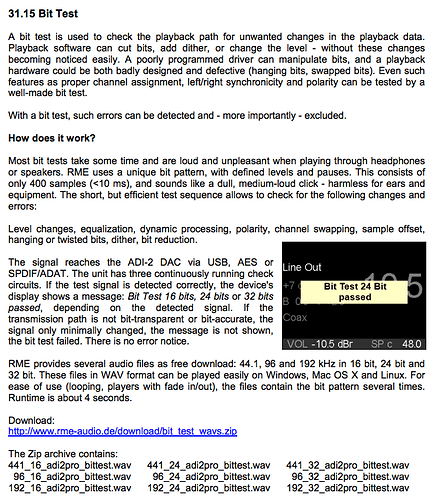 I’m speaking of dsd native with roon + adi 2 dac. Sorry. I did not mention that.

Yes, I saw that earlier, but I am reluctant to add another source for jitter (asynchronous USB is not totally jitter free). I ordered a cheap ($70) PCIe toslink sound card/interface instead, which is supposed to handle everything up to 192 khz (it also have toslink in, for recording). Lets see how that works.

I could also go RME all-in and order their PCIe sound card, but its over $500 so a little overkill (and can handle way way more than I will need).

I ordered a cheap ($70) PCIe toslink sound card/interface instead, which is supposed to handle everything up to 192 khz (it also have toslink in, for recording). Lets see how that works.

Cool. Let us know how it goes with RME’s 24/192 bit perfect test files… if it fails, I would go for the miniDSP USBStreamer because I know that it does what it says on the box.

Already tried that on my current motherboard-toslink, 192/24 works flawlessly, the problem is that 176khz don’t work which is what DoP needs. For some reason, everything from 44khz to 192khz is supported except 176khz on my motherboard audio (Realtec ALC1150).

I will also receive my new toslink cable from Lifatec soon (470 stands glass fibers), will be interesting to see if it increases the SQ (according to people at RME forum it wont).

I will also receive my new toslink cable from Lifatec soon (470 stands glass fibers), will be interesting to see if it increases the SQ (according to people at RME forum it wont).

Whether it makes a difference or not, it’s a nicely made cable and not un-reasonably priced.

I’ve used one for years too. Initially bought it because some really el-cheapo cables I’ve used failed to pass DoP64 at the time.

I got the RME ADI-2 DAC and it sounds excellent. The sound is very fluid and smooth compared to my old Pro-Ject Pre Box S2 Digital, but despite this have more details. The clarity of the sound is on a much higher level. And the DSP and configurable auto-adjusting loudness function is awesome, even at very low levels the music sounds full and complete.

I would guess that “analogue” lovers would not like this DAC though, its extremely neutral and open and highlights both the good and the bad. But if you want your HiFi to reproduce the music as faithfully as possible (which I do), its an excellent DAC as far as I can tell.

Are you comparing the built-in headphone amp sections of the RME vs Pro-Ject S2 here also?

Or just comparing analogue outputs of the DACs, to separate amp/s?

Just compared it as a preamp directly connected to power amp and then speakers.

It depends on your transport ie on your Roon endpoint, if it has the right drivers. If you have some Linux device it usually has the DSD drivers but the audio interface must also support DSD. On a PC, you will need to install the Madiface USB drivers (if I remember well, they are common to many RME devices, including the ADI-2, and can be found on their site). That will enable DSD native through ASIO. If you then want DSD direct mode in ADI-2, that has to be enabled through the ADI-2 menu and it does NOT work with the headphone output, only with the rear outputs and you cannot change volume. Otherwise ADI-2 will convert to PCM and you could have done that in Roon of course.

I enabled the option in the dac but still no native dsd. With my cma400i its working on the same endpoint. But i think that the rme can “only” do dsd over pcm in roon. Can someone confirm that or is there anybody out there who runs the rme with roon and native dsd configured?

I tried native DSD over toslink but could not get it working, so my guess is DSD over DoP (DoP or native does not matter for SQ though, although DoP takes a little extra bandwidth).

The direct-DSD function in the RME DAC is to make the DAC handle DSD directly (which means disable volume and DSP). That means full volume, so don’t try it if using RME as preamp. The normal DSD handling is like in Roon, i.e. it converts to PCM before volume and DSP is applied.

Are you comparing the built-in headphone amp sections of the RME vs Pro-Ject S2 here also?

Or just comparing analogue outputs of the DACs, to separate amp/s?

Some comparisons with Hugo 2 here, which I think you are familiar with: https://headfonics.com/2018/04/rme-adi-2-dac-review/

Just compared it as a preamp directly connected to power amp and then speakers.

You are potentially comparing different preamp design and digital volume controls . The ADI-2 DAC can be better optimized as a pre, with different gain settings… The Pro-Ject S2 DAC can’t.

But in your case (straight into power amps) it’s definitely a good feature to have.

I’m not a fan of the S2 DAC’s digital volume control, especially when you get down low. But now I use it as a straight D-to-A converter only, fixed at 0dB volume…

From what I read and experienced myself, the implementation of digital volume in RME is excellent, especially in combination with auto-ref which sets the ref-voltage based on volume and sensitivity of amplifier automatically to maximize dynamic range.

Another excellent feature: I often listen when wife is sleeping, so have to listen at low volume. And I absolutely love the configurable loudness function, toggling it on/off at low volume is like going from music over a telephone line to real music.

Here is how it works:

So now when I play at -57dB I get +8dB bass and +5dB treble, and that lowers gradually as I raise volume to -37dB at which point its 0/0. No reason to ever fiddle with it, I leave it on at all time and let it do its magic.

Surprising that not more DAC has this feature, its a total game changer for listening at low volume. But it does require a good display and proper build in DPS, so maybe not so strange.