ROCK and Library on the same disk

Is there a way to use the same physical drive for the server’s core files and music library or do they really need to be on separate physical disks?
I’m asking because I have bought a 1TB SSD on the cheap that’s overkill for ROCK itself but might be too small for my music library and I don’t have any other SATA ports left.

However you are free to do whatever you want with a less specialized Linux distribution.

That’s a shame. Is it something that could be introduced at some point? Being able to splint a single drive in core/library partitions would’ve been great.

@Martin_J It works, I tested it. You can just copy music to the “storage” folder, it will play as well. But the thing has a bitter catch. After restarting the Rock, the folder is empty. So it stays like Dany says. Not with Rock.

With Rock you can either use an internal hard disk (or ssd) or an external one on the usb-port. But as I said: either - or. Both is not possible. The capacity of the hard disk for your music files must therefore always be greater than the amount of data, because you can not split them.

This is not a problem with a Windows installation. I have 2 ssd’s a 1 TB summarized to a drive with 2 TB. If you do that via an integrated RAID controller (Raid 0), it works, but the trim command does not work for these two ssd’s. But taking the utility in the Control Panel for storage-pool, both ssd’s are merged into a JBOD drive with the sum of both capacities and the trim command works perfectly.

In the end result, both (different) ssd’s are combined into one drive. 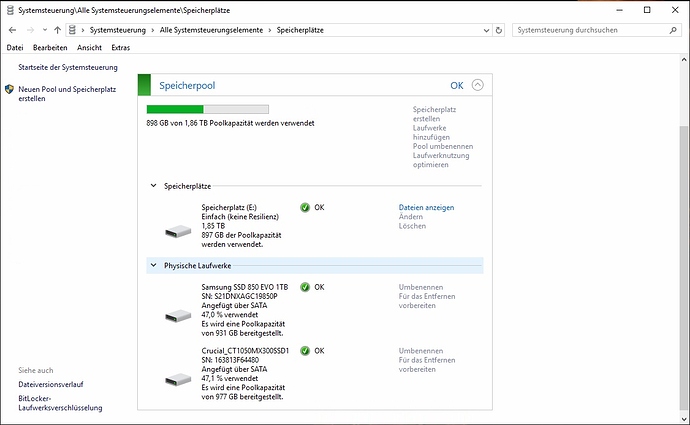