I’m in a bit of a bind here even as I’m eagerly awaiting the launch of ROCK. I’ve been offered a 7th Gen NUC i3 machine at the same price as a 6th Gen i3. However no testing has been done on the 7Gi3 device as a ROCK, so I’m leery of jumping in with the latest and greatest.

In addition, I presume that even the latest 7th Gen i3 will be significantly less powerful overall compared to an i5 device? Should I then move instead to the older 6th gen i5 for better Roon performance for the longer term? (this NUC will be my endpoint into my Dac).

Thanks for any and all advice given - very deeply appreciated!

Good point - i’d like to upsample to DSD64 at least and run 2 zones max. (small apartment)

Also - I wonder if it were possible on ROCK to throw up on a tv screen using the nuc’s hdmi things like the booklet, lyrics, and album art. I know it runs headless, but it’ll be a nice option…

I might try to err on the side of getting the meanest and best spec NUC you can if it’s a matter of uncertainty how many of the new upsampling and stream enhancements (DSP) features you are likely to use.

While the ROCK will leave more headroom than say a windows or Mac OS running 1.3 I am not sure that I would be going for anything less that an i5 or more likely i7 based setup given the option and starting a new core setup.

That’s good advice. Will proceed to purchase the highest spec I can afford. Would heat / power draw come into it if left running 24/7? I understand an i7 will draw the most juice, and I wonder how this will affect the life of the m.2 ssd and the spinning HDD inside the NUC containing the music files.

If you don’t want to upsample to more than DSD256 in one zone (and do PEQ in another for example) then a late model i5 will be fine. See the CPU usages in this thread for some comparisons, particularly the gear and setup that Rene (@RBM) is using.

If you have any designs on upsampling to DSD512 then a late model i7 will be a must to even start thinking about it. Roon doesn’t yet support upsampling to DSD512 but it may do so within the life of the server you are about to acquire. My horse n’ buggy (Haswell) i7 coughs and splutters at DSD512.

An i7 is likely to have fan noise that may be disturbing if you are locating the NUC in the same room as your speakers. If all that you are interested in is DSD256 and below, then a good quiet i5 will be a better solution drawing less power and making less noise.

The life of an M.2 SSD is measured in writes rather than time on and it won’t be adversely affected by leaving the server on. This is an interesting article about HDD life. Keeping the HDD spinning will affect lifespan. The moral of the story is to get a moderately priced SSD (SATA rather than M.2) for your music files if possible.

Really appreciate the quick and detailed feedback, Andrew and Wizard! Will post my chosen device list once I get the shopping done. Looking forward to the ROCK dropping!

I’ve posted this elsewhere but my i5-6500 running Windoze 10 Pro with 16GB ram and 250GB SSD will cope just with DSD256 without any other things like EQ and audio analysis going on. playing via Roon Bridge on a mac mini to an Oppo Sonica USB connected.

Only the Sonica should work at DSD512 (according to the specs - Native mode only) but I don’t see any evidence of this in Roon in the audio settings for the Sonica in exclusive mode. @andybob what dac are you using to see DSD512? Am I missing something?

Roon doesn’t support upsampling to DSD512 yet.
I have attempted DSD512 using HQP into a Holo Audio Spring DAC. My BRIX i7 4500u couldn’t handle it. I plan to use a new server (i7 7700 with CUDA support from a GTX970) to send DSD512 to the Spring (maybe even closed form filter).

Ah so HQPlayer then…so Roon can’t support even native DSD512 outside of the DSP settings? Even if the DAC is 512 ready?

No. Roon supports DSD512 or more if the media contains it. Roon’s DSP Engine doesn’t yet support upsampling to DSD512. Corrected my earlier posts to make that plain.

Adding a data point: I’ve got a spare NUC6i3 running as backup server. Upsampling to DSD128/7th order is OK: 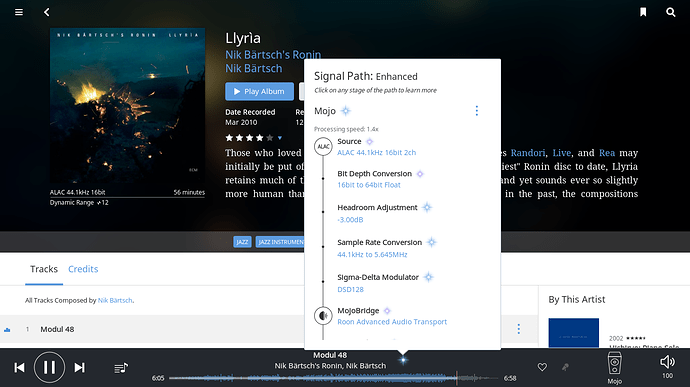 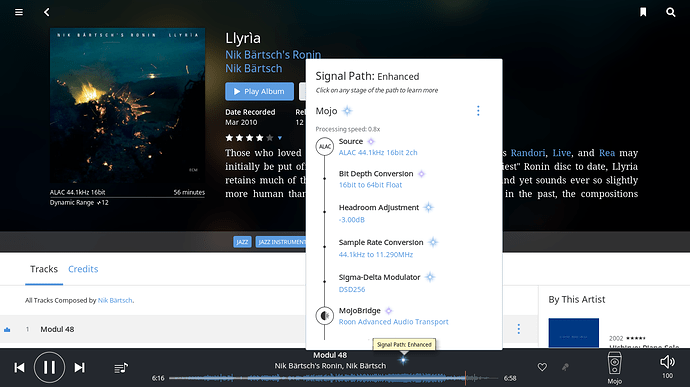 Just an update and some questions - I’ve ordered a NUC6i5, but my reading indicates that I need to be careful about so many things such as RAM speed and M.2 types that it’s confusing me. Could I get some advice from the community on choosing brands or types of RAM (either 1x8gb or 2x4gb) and a 120/128 gb m.2 ssd? I am looking forward to ‘set and forget’ eventually, but I do want to get down to playing music on Day One when the ROCK drops. Many thanks!

I’m also curious about the i3 vs i5, specifically…should I buy the NUC6i5 which is going for about $299 right now, or go with the NUC7i3 for the same price?

I would wait until the devs release the final approved hardware for ROCK boxes.

In the notice about discounted 6i5s on NUCblog.net, they point out that the 7 series really only improve video. So for our purposes, the 6i5 is the better deal.

I just bought one, and I don’t even need one – giving it to my son.

I’m currently advising customers to stick with the NUC6 platform. The i5 offers excellent performance and stable BIOS. It’s also known to work well with a variety of linux configs and kernels.

The NUC7 has some interesting features, but the addition of Thunderbolt 3 gives me a bit of pause. My experiences with Thunderbolt 1 and 2 under linux have not been exceedingly positive and I don’t know where TB3 is at in terms of linux support.

Keep in mind that we’ve all learned that the Roon devs are very conservative in their technology selection so don’t expect ROCK to ship with the latest 4.10 mainline kernel. My bet is that it’s going to be based on a recent “longterm” rev with lots of in-field testing. That means 4.4 at best.

I’m sure that TB3 can be disabled in BIOS, but I’m more concerned about BIOS bugs getting in the way of linux running smoothly. For those who weren’t at this place a year ago it was at least June or July before the NUC6 BIOS and linux got along reliably.

I’d personally go with a NUC6i5 over a NUC7i3 any day… the i5 is much faster for not much more heat.
The generational changes are tiny, but the i5 is significantly faster than the i3.

Guys, I need a NUC recommendation here for 1 zone, with DSP and upsampling on. Should I go with NUC7i7BNH or NUC7i5BNH or perhaps a 6 gen i5? The NUC will be in my listening room, connected via ethernet to my sms200Ultra streamer. At the moment my DAC doesn’t support DSD512, but I may change this component in the future if Roon starts supporting DSD512 upsampling.

If you want to buy an Intel NUC Kaby Lake (7th Gen), you can choose from an i3, i5 and i7 processor. The i7 is the fastest processor, but if you want a fanless case like the Akasa Newton S7 or a better (lineair) power supply like the Sbooster BOTW P&P ECO 18-19V, then the i5 is a better option. This is due to the lower power consumption and less heat. Because of course you want to know what the difference in performance is, I’ve looked up a number of benchmarks, showing the differences between …