The ROCK is connected to a Synology RT2600ac router via ethernet cable.

The ROCK is connected to a PS Audio Sprout100 DAC via USB cable.

I’ve already had the device inspected by the manufacturer, so I believe the issue is with the Roon software at this point.

Please let me know if I can provide any further information that would help in diagnosing the issue.

I’ve found it far too easy to inadvertently leave something misconfigured while exploring… do you have a mix operation active in procedural eq?

What happens if you turn off/bypass all dsp?

Try not to get too hung up on the DSP: that was just something I was toying with to try to narrow down why music sounded poor only when played with the ROCK. When I’m playing music normally, I have a purple lossless signal path (see screenshot attached). 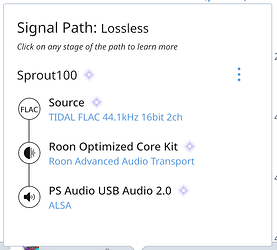 The real issue is why I don’t have the same problem when using Roon on other computers to drive the same equipment. I’ve noticed a slightly different device configuration in Roon’s settings and I’m suspecting the ROCK isn’t handling the device properly.

Device settings, when connected to the ROCK: 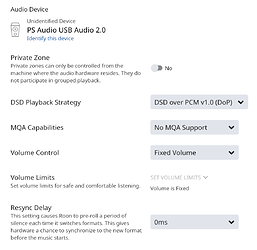 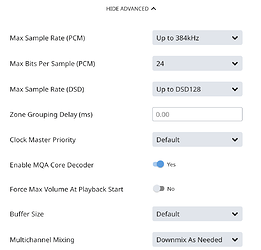 For comparison, here are the device settings, when connected to my Mac laptop: 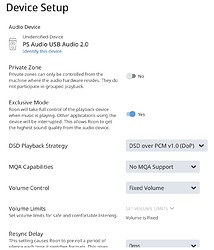 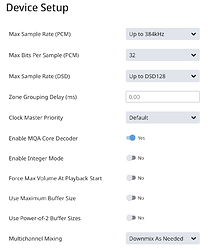 Each device will have different settings based on the capabilities of each one and what support the DAC has for the operating system it’s connected to they are not all equal wheb it comes to DACs . It’s not a Roon tested DAC so maybe it’s something to do with the Linux driver. This is not controlled by Roon or ROCK but part of the Linux Kernel in general. I would look up to see what Linux support there is for the DAC.

It may well have to do with ROCK being Linux and using Linux USB drivers. Your best bet would be to ask PS Audio if the Sprout can be directly connected to a Linux box and work. Not all DACs work or work well with Linux.

I’ve already reached out to PS Audio: they had me send in the unit for a firmware update, and I just received the unit back after that. There are reports on this forum (Roon and PS Audio Sprout100) and theirs (https://forum.psaudio.com/t/sprout-usb-audio-2-0-compliant/11486/) of the Sprout100 working properly with Linux after this update, so I believe the issue is with the Roon / ROCK software at this point.

Try not to get too hung up on the DSP

@AndyR I apologize if I came off as dismissive: any help is much appreciated, I just wanted to be sure that there wasn’t confusion about what the issue was. Lord knows that I’ve fallen victim to the “is it plugged in?” sort of problem enough times to make all of these sort of checks worth doing.

On the “maybe the DAC doesn’t work well with Linux” front: I dug up my old linux laptop and installed Roon Bridge on it just to test it out. Both channels behave appropriately on it, so I’m still inclined to believe that this isn’t a mac vs windows vs linux issue: it’s a ROCK issue.

If you have a backup of the database, you could always try re-installing ROCK.

I installed Arch on the NUC instead of the ROCK and I’m running the Roon Server now without issue: I get both channels working as they should be.

This is a fine solution for me personally (I’m the type to think installing Arch on a headless server is a fun Sunday project) and I’m not going to do anything more with this, but this should affirm that the ROCK software has a bug and maybe somebody from Roon would want to look into it.

I installed Arch on the NUC instead of the ROCK

If you have a backup of the database, you could always try re-installing ROCK.

I did that (I think: I clicked the “reinstall” button on the web interface) to no avail.