I’m toying around with the new Parametric EQ settings in Roon and have determined that there are two Freqs that require tweaking. This info was gathered by first taking measurements using my XTZ Analyzer setup.

Anyway, I have applied the changes and all appears to be working as expected.

My question though is two fold: 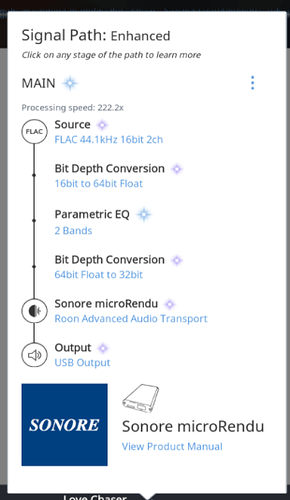 As long as processing speed is over 1.x, you should be fine

Re 2: all of Roon’s DSP is done on 64bit floating point numbers, so we always convert to 64bit as a first step. But, once we have 64bit data there’s no reason to reduce it any more than necessary, so we just convert down to the highest bit depth the downstream components can handle.

Thanks for the details.

Now I have one more question on an issue that I just noticed. You can see in my first screenshot things appear to be working as expected and playback was all good. That was with a standard Redbook album (ie…16/44).

It doesn’t appear to be a Resource issue despite what the Error message seen in this new screenshot would suggest. You can see in the background I have a Ubunutu “Top” session running on the Roon Core server. CPU was not even blinking and RAM is still plentiful (16GB). The ROON DB itself is local to the Core Box and is located on a 256GB Samsung M.2 Pro PCIe SSD card (ie…as fast as you can get). Ethernet is 1GB and all components are running on the same switch with NO Hops involved. 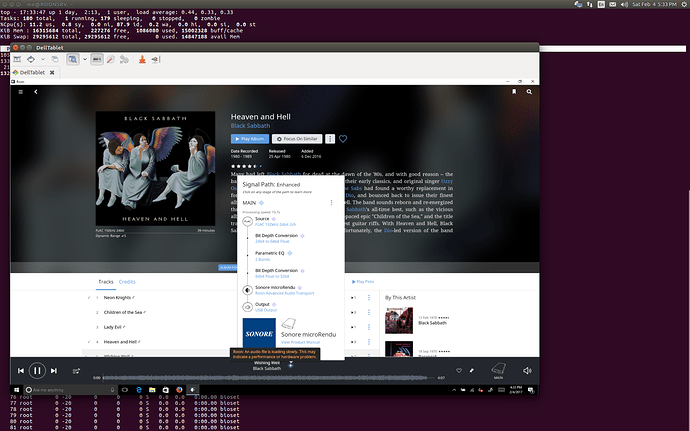 One more point of note…when I turn off the PEQ and Headroom settings…in other words, the default settings the same issues happens on all 24/192 files in my library.

DSD64 is fine without but pukes with them enabled 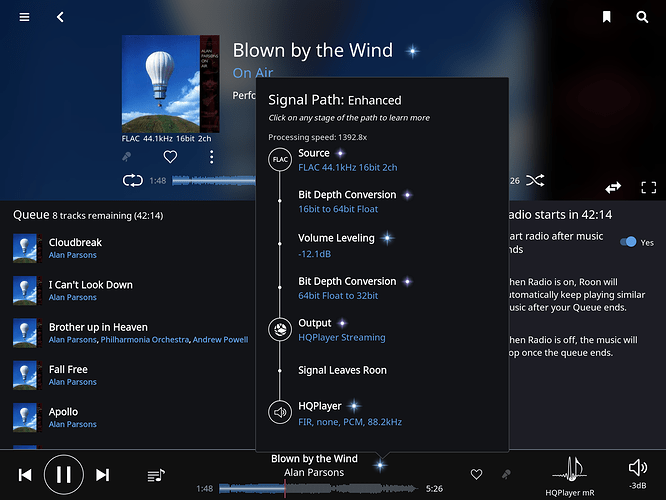 ! My processing speed is running well over a thousand. That said, what is the exact benefit of the processing speed, and what are the norms.
brian (Brian Luczkiewicz) February 5, 2017, 9:34am #7

The number is inversely proportional to CPU usage.

1x means you’re processing in real-time–it takes 1 second of CPU time to process 1 second of audio. If you see 1x, you have a CPU core going at 100% processing your audio stream.

The numbers are most interesting when they’re smaller than 10x. Above that point, it probably doesn’t matter.

Thanks for the explanation Brian. Appreciate it.

Seems DSD up sampling is the most intensive processing, approaching 10x on my system

Welp…seems something is definitely broken while streaming 24/192 files with the 1.3 versions I have on hand, in my room while using my gear:

Prior to the 1.3v I had no issues with 24/192. This is without any of the DSP stuff Enabled. Once DSP is Enabled the additional issues I mentioned earlier also appear.

For me its not the end of the world as I have plenty of other stuff to listen to while the bugs are worked out. All in all though, I am liking the idea of having all these extra knobs to turn if I so choose.

HI.
Im trying to set up the EQ-module for a 6band parametric EQ. I can choose the frequencies and the types of the bands. But i´m not allowed to choose Qs other than 0,1 or 1. Would like to have Qs of 0,7. Doesn’t work. Always falls back to 0,1 or 1,0. I am working on MacOSX.

Is there a way to combine or sum 2 tracks of stereo to mono (2 channel output)? Once in a while some of us come across some older recording with fake stereo which often can be successfully returned to mono. Modern preamps tend not to have this option but some computer players (foobar 2000) have this option, although it’s not always easy to find it.

If your current DSP setting don’t include this, could it be considered as an option in the future?

I described how to accomplish this here. Once you have it set up, you can just flip on/off the “enable” switch for the Procedural EQ that’s providing the effect.