I am wondering if there were any improvements made to the Radio function in 1.3? More specifically, the ability to query the Tidal database for similar music and not just that contained in my library. I have looked all over and have not found any ‘toggles’ related to turning this feature on. I do realize that the Tidal database is very large and the task could be very resource dependent, especially when Roon would be asked to potentially match genres not even tagged in the Tidal database. Yes, this was a feature request, but I really wish someone from Roon would chime in and confirm this is just too difficult, not high enough on the list or will have some flavor of this function in the future. Maybe all the MQA hype and ability to find Masters in the Tidal database will help this along.

Go the the Albums view and press the Focus button top left (or press CMD/CTRL-G on keyboard). Also note that the Focus window scrolls horizontally – the options you mention are located on the far right and hidden from view on small(ish) screens.

aaaah, found it again
thanks you for your fast help Rene!

Thanks for the response Rene. Just curious, can you point me to your source of this information?

See this update by @mike:

When will the Radio feature be improved? [Roon 1.4 is now live] Feature Requests

Thanks for raising this @Mystic. Improving Radio is absolutely a priority for us, and everyone on the team would agree that the current algorithm needs work. A huge amount of work has been happening over the last few months and we’re really, really excited to deliver new functionality and improvements across the app. The changes we’re working on are wide-ranging, but one of our main focuses has been improving Roon’s metadata infrastructure based on the huge spectrum of feedback we’ve received s…

For me, Roon v1.3 was always going to be about the metadata improvements. I don’t have any interest in the new DSP stuff or HQ Player. I just want Roon to send unaltered data to my DAC - which it seems to do well enough.

I have been playing around with the metadata improvements since the v1.3 release. I am very happy. I have been able to fix all albums that were problematic for me in version 1.2. I can see that the metadata tools are now flexible enough for me to deal with any future “difficult” albums that might crop up.

Perhaps there is still room for improvement in handling large box sets. Also, a better way for different people in the household to have different libraries.

Because of the time zones, by the time I updated, the major bugs which might have affected me were squashed before I upgraded. So it has been a painless upgrade process. Thanks very much Roon guys.

Many thanks for 1.3, but I still have a list of missing features that are important for me:

For me, Roon v1.3 was always going to be about the metadata improvements. I don’t have any interest in the new DSP stuff or HQ Player. I just want Roon to send unaltered data to my DAC - which it seems to do well enough.

That’s what is so amazing about Roon, even if we would have total different preferences, we can pick/use only those parts that suit us, without having to worry about the other options.

You can fully stream music untouched to your DAC and focus on the metadata, I can use the DSP to improve my experience and focus a bit less on the perfecting of the metadata

It won’t bite each other!

Guys, awesome work! Keep it up! You do an awesome amount with a small group of people!

OK, as time goes on and Roon continues to ‘analyse’ my music library, things are getting weird. Firstly, if I sort albums by MOST PLAYED, many of the albums are unplayed! While some of my most played albums are there, many are not.

In fact it gets worse, when viewing albums by MOST PLAYED, I have multiple entries for hundreds of albums, again see attached, but even crazier is that I am viewing 6476 of 5499 albums! 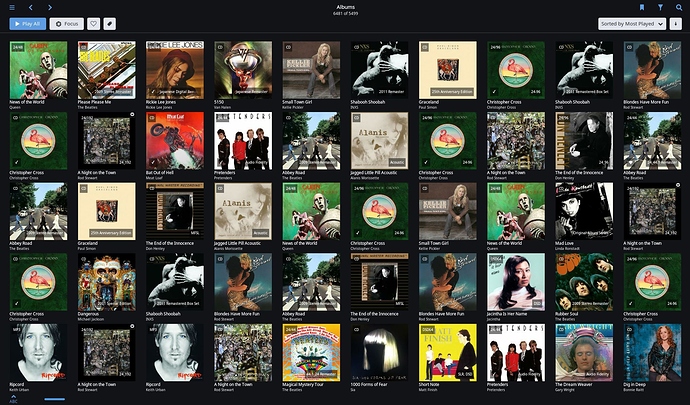 I’ve brought this to @mike attention the other day. The same issue was in 1.2 and they thought the bug was fixed for 1.3.

That’s a lot of Christopher Cross copies you have

Ha! Not to mention Talking Heads 77, apparently I have 8 copies of that! (in reality I have 2, CD and High Res!)

Only problem is slow to braindead iPad Pro. has to be wireless set up. Using 2.4 MHz channel for client , will try different channel, other wise no obvious problems.

Spoke too soon - congestion on the 2.4 MHz channel. Went to 5.8 and response OK.

The Roon 1.3 update is impressive! I’ve noticed a quirk or two but don’t want to quibble at the moment. Install was easy, Sonos integration is much appreciated in our household. Played around with DSP upsample this morning and am enjoying the crossfeed w phones as I type this. Excellent work Roon team. THANK YOU.

It depends. I was using Roon on a 8 years old desktop with core2duo E8200 processor with Windows 10 and only 2GB ram. This actually worked better then Roon running of my 2 year old macbook pro. Don’t expect it to do full dsd upsampling though.

Spent a few hours with different features and tweaking (more to come), but my main system is sounding like something other-worldly now, even with a mixture of high-end and mid-fi components after a relatively non-scientific couple of hours with the parametric EQ and a radio shack SPL meter. I have my room dialed in to within +/- 3 db from 20 to 1000. Every jazz recording with an acoustic bass I have tried sounds like I’ve never heard it before.

Upgrade was nearly seemless and pulled in my 6 Sonos zones as well. And, in one zone I use a kludgy pairing of a ZP with an old sunfire sub and another zone with a pair of satellites. The timing of the sync in Roon is noticeably better than it was using native grouping in Sonos.

The real benefit of 1.3 for me may be that I don’t have to maintain two libraries any more - one with the music in the highest resolution it was purchased and another one where everything has been converted to 16/44 for Sonos compatibility.

This software is a tinkerer’s dream, though.

I got a one-year-subscription in June '15 but although promising, roon turned out to be too buggy (metadata mess, interface lock ups) to be usable on my old 2010 mac mini. Now, the multichannel feature got me to try again. Having replaced my slow HDD with an SSD in my mac mini probably helps, but roon is much much faster now. Have not had a single UI lock-up, basic indexing of my library didn’t take days (audio level analysis does, but that’s fine), the metadata wasn’t nearly as messy as the last time(s) and while I still had a few albums broken into multiple parts, trying to fix the issues didn’t cause a whole new mess. Well done, all around!

Love the multichannel playback. Is iPhone support for the iOS-app new? Love it. PDF-booklets are nice. Also: extensions!(!!!) Whipped up a small extension to control my Yamaha receiver from within roon and while it’s still quite buggy (I blame it on the incomplete docs, not my lazy Sunday coding, of course), this is going to be really useful.

Anyway, great release. I’ll keep playing with this for the rest of the trial period.