Some very nice new functionality, but one I’ve been waiting for is not included:
In album view, pick an album (say the first of a box set that I just ripped via itunes) and then wanting to “play from here” from that album through the end of whatever is in the current view. Don’t see a way to do that…

Frankly i used it to get to the settings so often

@Graeme_Allan
I made some bookmarks where I included an inverse played-last-three-months focus.

I’m using the new 1.4 version for a few days now. Nice update that is a bit more convenient to use for a rookie like me ;-).

Another thing that I was a bit disapointed not to find is a random album play feature (and/or equivalent in radio).
Maybe I’ve missed something since I’m using it for less than a month now.
It seems that a lot of people are waiting for this. Maybe you have it on your list for 2018…

Frankly i used it to get to the settings so often

yah, the question was not why you click the link, it was meant to be ‘why are you going to settings so much’?

Just for references, somebody posted this with the same problem. Maybe it helps!

Functionality Regression in 1.4 - DSD+Volume Leveling on Bluesound [Resolved B294] Support

I believe I have found a regression with the latest 1.4 release and Bluesound. The following scenario always fails: DSD file sent to Bluesound with Volume leveling set to “auto.” The controller issues an error and no DSD file will play. Turn volume leveling off, it works fine. Volume leveling works with all other files, DxD, HiRez Flac, etc. It seems only to be a problem with DSD. Anyone else see this? This scenario worked flawlessly on 1.3. It should be noted however that about the time 1.4 w…

Having problems with the ”Play This now” function in the que view. When I try to use this on the IOS app (IOS 11 on iPad Pro) the app dies.

Because I have 2 external hard drives connected to the core. I disable/enable one of them from time to time. My original files that I have ripped or purchased is in one of them in their original form and I use that drive as a backup.
So when I buy a new album I download it to my backup drive, roon recognizes it, then I export (via roon) it to my other hard drive which is always enabled
Finally I disable the backup drive so that roon does not see my albums as duplicates.

Are you enabling your backup drive as a watched folder in Roon ? If so, why ? That will result in Roon importing duplicates of all your music and could cause problems.

Just leave one drive enabled in Roon and backup your music files (using Export is fine) to the other drive, which is not enabled.

The changes to the Zone Picker have made it so much better, and the turn around time…very impressive.

Thank you @mike and the Roon team.

Whilst I really like the new zone picker I’m finding the line art for the iPad and iPhone to be quite distracting.
It doesn’t seem to be in line (no pun intended) with all the other line art.

It’s a very minor GUI gripe but I find it jumps out at you and my eyes are drawn to the iPad and iPhone.

A post was merged into an existing topic: 1.4 IOS problems - no output

There’s only a tiny space to exit this view. Unless there’s another way I missed

I may have missed this yesterday (apologies if I did) or maybe it was fixed in today’s iOS update.

But there’s plenty of space to tap to exit the zone switcher. Anywhere in the white empty space, the “Zones” text or the left space. 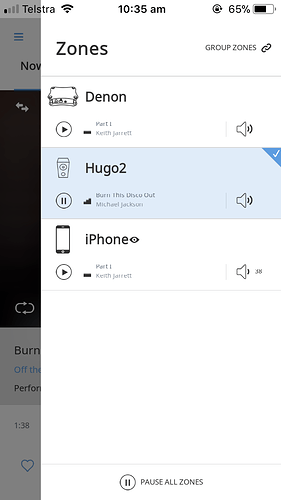 Thanks Jan, probably overkill but a reinstall of the windows executable got things back on track.

My wish list: First MQA unfold on Roon, and most importantly room correction

Just noticed that every remote has its own unique customised Play controls ( including the critical “One Click Play Action”). Using a phone, I got an unexpected result and my Queue disappeared. No problems, I dragged the collapsed skipped group down below the current track in the Queue View.
All my remotes have the same play actions now.
The new play controls and Queue are really well designed and a pleasure to use.

Macs and IOS devices as endpoints is wonderful and works seamlessly.
I appreciate the refinements to the queue and device grouping interface.
Just exploring the rest.

My iPad doesn’t show the time and battery did you have to set anything?
Ged

Did you update the remote as well as the core? I had to begrudgingly update to ios11 to get the new remote, but it was worth it–I didn’t realize how much I’d like being able to see the time and battery!

Just after I sent my question, i twigged that! My ipad is too old for IOS11 I think so I am stuck on 1.3.