All of these spoken word items I would like to ban only from radio. When playing the album through normally I don’t want them skipped. Is there a setting I have missed?

No, you aren’t missing anything. Banning is for all “automatic” play situations (i.e. where you haven’t picked that specific thing). That includes album play, artist shuffle, radio, etc. There is no “just ban this for radio”, and I’m not sure there should be.

As I mentioned above, Roon automatically removes a lot of tracks like this from Radio. I don’t think it would auto-exclude those “Dialogue” cases, however. Maybe that is something for us to expand (@mike–this is for you. Also consider “applause”, which is not in the current list)

It is difficult to generalise a pattern from the track titles. Dialogue by Johnny Cash was just an example. It is rather common in Classical libraries so other variations I commonly see are “spoken”, “narrated”, or just “voice” and then there will be localised equivalents in French, German and Italian. For example parlé in French. One pattern I have noticed is that the publishers will tag composer and/or genre as “Spoken Word”. Is that a rule that roon could standardize on? Here is an example: 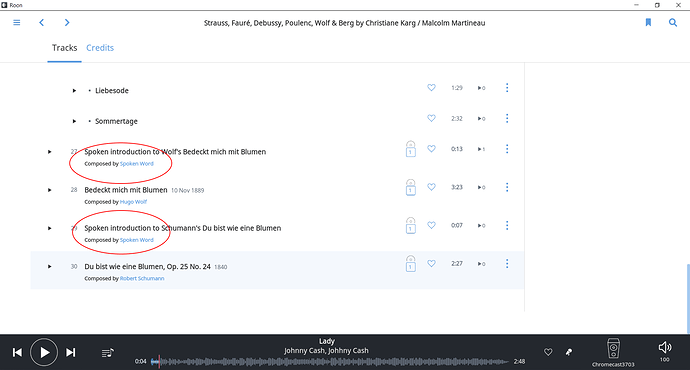 And here is an example where “voice” (very ambiguous, is that singing voice or spoken voice?) has been used to title a lengthy narrated introduction to Saint-Saëns Carnival of the Animals: 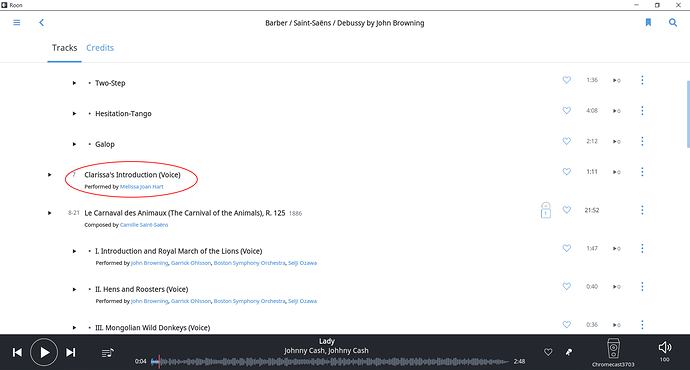 A big challenge is Opera. Maybe there are those that would like the recitative on radio but shuffling what is essentially sung dialogue from different Operas doesn’t make a lot of sense to me. I do not have access to my main library at the moment but I have a recollection that tracks are sometimes titled “recitative” or similar but it is not a universal practice. For example below, is Mozart’s Marriage of Figaro from Deutsche Grammophon. There is a lot of recitative in that Opera which makes sense when listening through the whole piece but lengthy recitative on the radio queue is not something you would expect to hear on a regular radio station for example. The problem is there is no indication that the marked items are recitative: 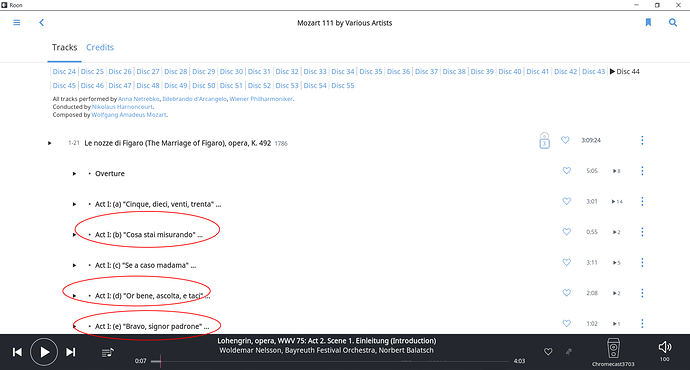 If roon had a rule that it excluded “Spoken Word” marked and/or in a genre or composer tag then there would be some control over this. Technically I am not even sure that Mozart is the composer of the recitative as traditionally it was improvised by the singers.

That said, I love that radio works within the confines of my library. Will this remain an option?

With non-Classical seeds, I am getting Classical creeping into the radio queue on a regular basis, especially when I seed with Easy listening / Bossa Nova artists. This is probably the reason why: 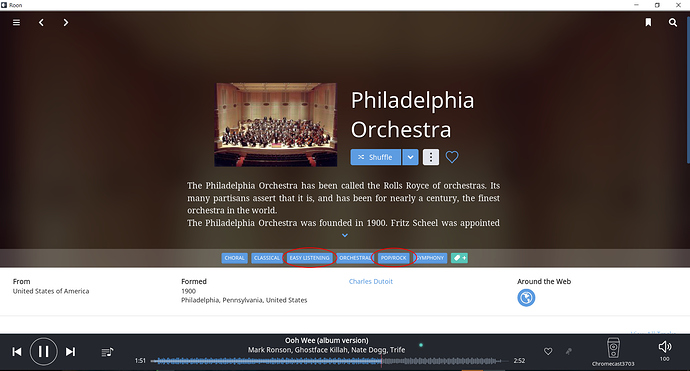 Crossover albums are common, especially with the most famous Classical artists: 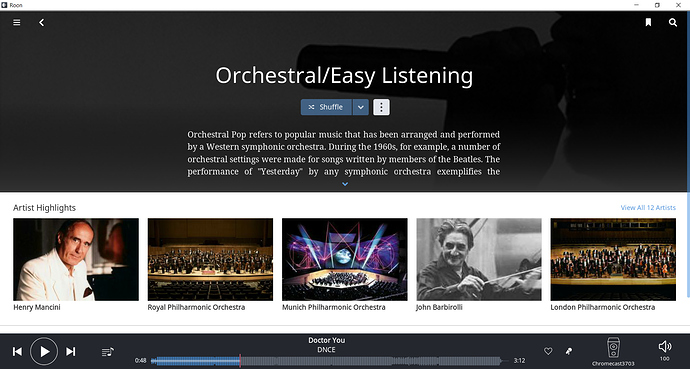 Another pattern I see is that Folk, Folk/Rock seeds especially those associated with acapella voice will often provoke large scale choral works. So here the seed was the Folk/Rock crossover Eddi Reader, associated with the very intimate “art” songs of Robert Burns. The result was a large scale Arvo Pärt choral work on the radio queue which is jarring in every way imaginable. 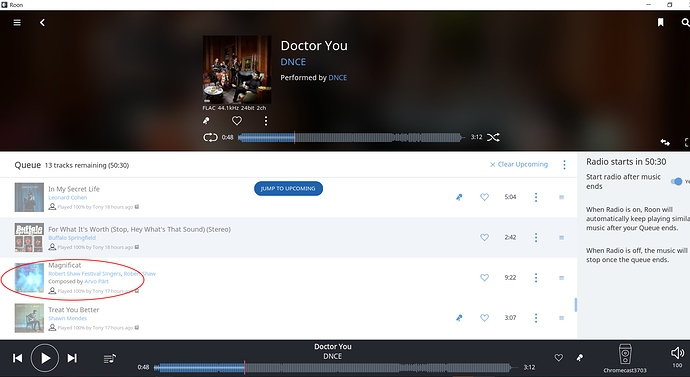 Is there any strategy for avoiding this? Other than the nuclear one of removing all pop tags from Classical artists. Would that even work? I am noticing these effects happening even where the offending Classical artists do not have any obvious pop tags but I assume roon is finding a relation with Classical artists that do.

From Bob Marley to Ange ? 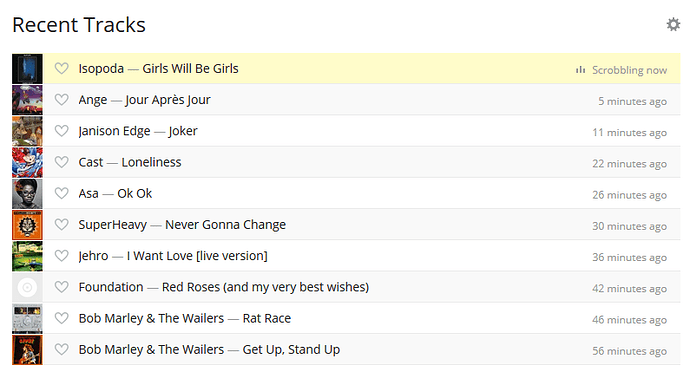 We have some changes coming that re-calibrate our treatment of artist-level genre data. It should reduce the probability that artist level genres cause radio to “cross over” via artists with overly broad genre data.

I look forward to that. Getting radio right will make metadata issues look like nit-picking to many of us. Me any way.

I look forward to that. Getting radio right will make metadata issues look like nit-picking to many of us. Me any way.

I’ll believe it when I see it

I’m using Roon in Windows.
Is it possible to add an “auto-start” option as well as “minimize when start” option in Settings?

I don’t know if a new thread should be made for Build 306 radio?

I have started roon radio build 306 with various seeds. “Disappointing” is not really the right word. My experience is not what I was I expecting from the release notes. This will do as an example, but I did try with several different seeds. Nothing worked.

I started with a live Eddi Reader track. The seed was an unidentified live bootleg. 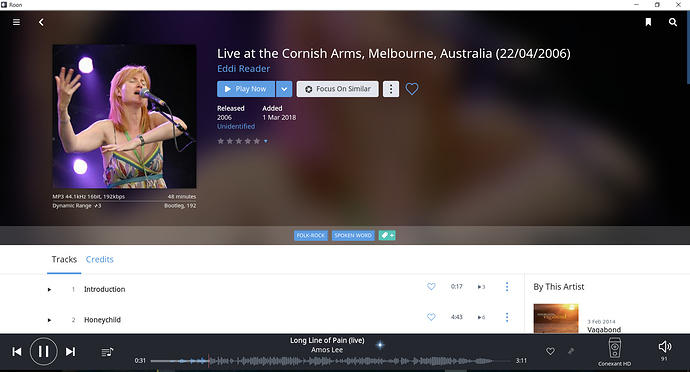 I would expect Folk/Rock, Contemporary Singer/Songwriter, Contemporary Nugrass would work as well. There is plenty of stuff in my library. I can make a nice play list in a few minutes using any number of players lying around on my PC. I was hoping roon would find things hidden away on box sets, compilations etc. that I didn’t know I had or had forgotten I had or the other players don’t see the connection. I was also expecting some variety in terms of tempo/dynamic range, mood etc. Just like a real radio station takes you on a journey for an hour or two.

What I got was: 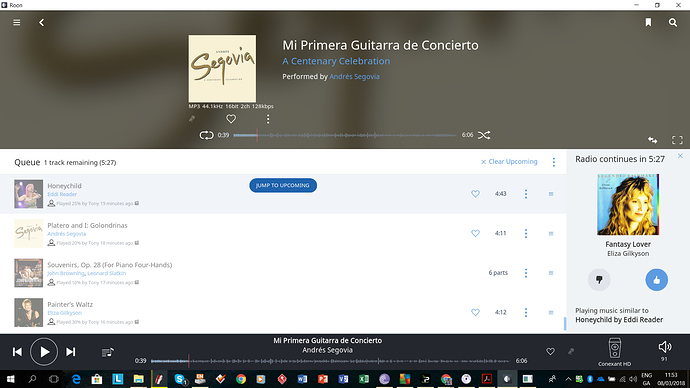 First up after Eddi Reader was a Classical Guitar track. This was followed by a 6 part Classical Piano piece. 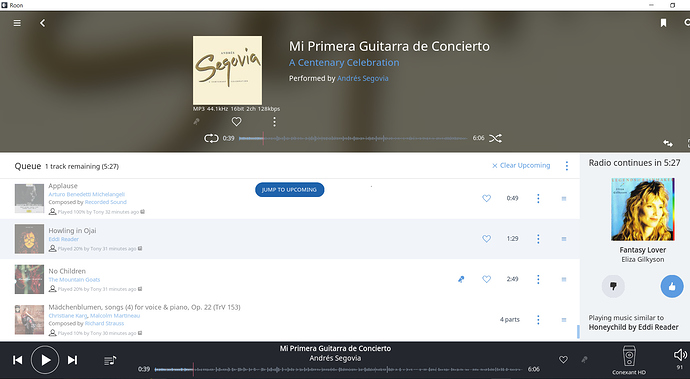 After some Eliza Gilykson (good choice) I got a totally disconnected 49 second burst of applause to some Michelangeli classical piano (unrelated to the Browning that proceeded it). Then some reasonable choices followed by a 4 part art song/Lieder cycle of Classical Soprano. 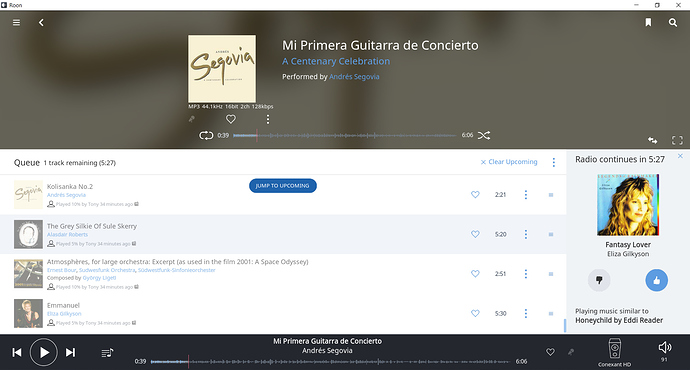 After a few more Eddi Reader, Eliza Gilykson and Fred Neil (ok) this was followed by more Classical Guitar, some full on Polyphonic Ligeti and then some very traditional Scottish Folk (none of which works at all).

The pattern continued with a similar bizarre mixture of Folk/Rock, Classical Guitar, Classical Piano, Traditional Folk and Modern Classical until finally roon found a 6 minute interview with Andres Segovia reminiscing in Spanish about his early days of establishing the Classical Guitar on the concert circuit. 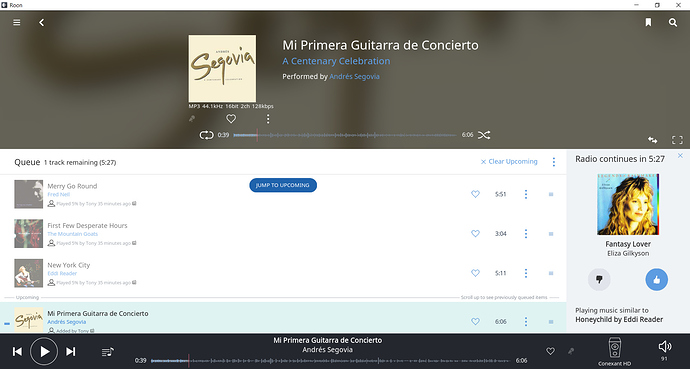 That’s when I could bear it no more. In many ways this is worse than random. It was almost as if two very conservative but unrelated playlists were shuffled together.

Better. From : Dead Can Dance — The Host of Seraphim 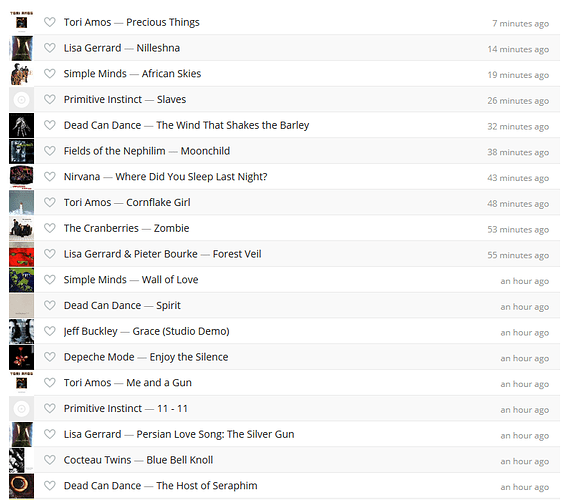 @Dirk-Pitt Except Primitive Instinct, could be my playlist

Played radio for about an hour and it worked well, though I have to say the previous version did not have much misinterpretations as well.

Heckuva list. Just need a little Bauhaus and Killing Joke to round it out a bit!

Too many artist repetitions for such a short playlist:
Tori x 3
Lisa x 3
Dead Can Dance (Lisa) x 2
etc.

If your library is limited in terms of scope it’s an acceptable result, but looking at that playlist reminds me of the pre 1.4 days when you ended up going in circles around 4-5 artists till it irritated you enough to stop Radio.

If returning to a seed artist or other artists is a necessary element of keeping the playlist generation in line with its origins Roon should foo its own algorithm into thinking those tracks have been played and let it pick the next track on that basis. In general the same artist coming up once every 20-30 songs is fine, more than that and you start wondering why you have all these other albums in the same vein that are steadily ignored. For me > 1/20 repeats becomes annoying pretty quickly, albeit a small library or narrow seed may leave little choice in the matter under those circumstances. Tracks shouldn’t repeat unless a small library or narrow seed dictates otherwise.

Am I reading that you started radio off with an unidentified track? If so that seems an odd choice seeing as roon is built on metadata…

Yes. But unidentified albums also have metadata in terms of user defined tags. These I have mapped to roon tags under “Genre Mappings” in Library. But as you suggest it doesn’t look as if these are taken into account unless the album is also identified.

Having said all that, I get similar results with identified albums as well. A particular problem is seeding anything that has a Folk, Folk-Rock, Indie or Alternative tag. It’s almost as if all these sub-genres are being related by a common acoustic , jangly guitar theme. But to my ears these genres will often not work well together. I have a lot of classical guitar music as well and find that sooner or later that finds it’s way onto the radio cue after seeding the above and that seems to act as a bridge to other classical music.

I am also finding that “applause”, “audience interaction”, “dialogue” that is in separate tracks is not being ignored by roon but is actively being sought out. So in the above example, the album master of ceremonies intro is tagged “Spoken Word” at a track level. But this becomes an album level tag and roon then finds other “spoken word / applause” tracks on other live albums identified and unidentified which it then also puts on the queue.

Seems Genre metadata is very important and Roon doesn’t know anything about the underlying audio: 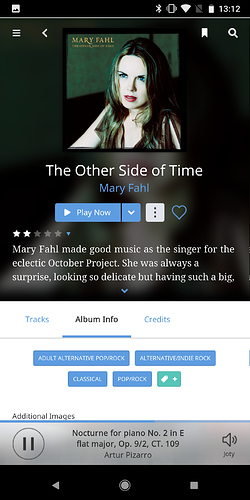 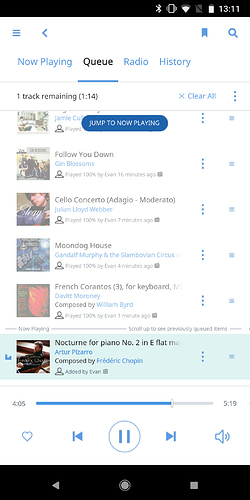 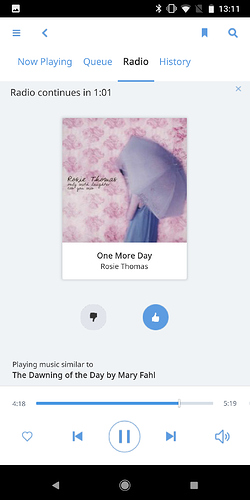 I have not sampled the new Radio in detail or at length yet. However my initial impression was that, using a relatively obscure punk song as a seed, it did quite well and dived more deeply into the corners of the punk genre than it had in the past. Initial impression is positive.