Roon 1.5 - Option to make Redbook default view in Tidal instead of MQA

It appears that with the new release, the default view on Tidal is to show MQA versions of albums and I don’t see an option to change this view in settings.

For those of us who don’t care about MQA, I’d like to request an option in settings that allows the user to select the default version - MQA or Redbook. In my case, I’d like to make Redbook default so I see this on Tidal when looking for new music.

As it stands now, if we want to play/add an album, we only see the MQA version and to add/play the Redbook version, we have to click on the “versions” tab to find it.

While I appreciate and am thankful for the new “versions” tab which makes things easier, adding this requested “view” option would upgrade my UX from “easier” to “great” since I’d be able to see the versions I want at a glance and would also save me a few mouse clicks.

Hmmm this appears to be a Tidal thing though, not Roon specific.

Screenshot from the Tidal Desktop app below - this is the ‘New’ section, not the ‘Masters’ section.

I believe Roon is only reflecting what Tidal itself is showing and Tidal is mixing both MQA and non-MQA in the ‘New’ section.

It wasn’t always like this btw. MQA albums used to be only found in the ‘Masters’ section of Tidal but there is mixing now. I only noticed this a few weeks ago but it may have been happening longer, I don’t know. 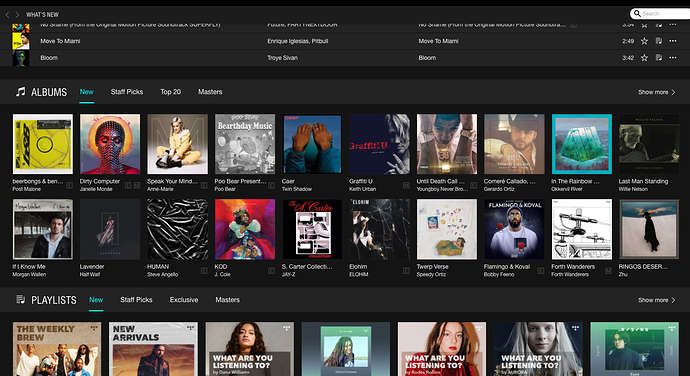 Thanks Sean. Frankly, I don’t use Tidal much - especially the desktop version, so I wasn’t aware of this. Still, a boy can dream that Roon can improve the UX since they continue to do so.

No worries Chris. I wasn’t aware until only recently too. The mixing crept up on me.

Maybe send an email to Tidal Support too. Can’t hurt.

I said I don’t use the Tidal website very often because I have Roon - and when I do go to Tidal directly, it is usually through the Android app.

This doesn’t mean that I don’t view Tidal through Roon – and I do so at least every Friday when new releases come out – which is why I made the request.

I second this request (as I have on the 1.5 feedback). Why did Roon decide to privilege a lossy and controversial encoding like MQA over real PCM? Because the marketing claims it is “HiRes”??

Why not give the end user a sorting option, or an option to see all versions as we are already used to that?

We now have to drill down (multiple clicks), manually clean up or library by making the 16/44 bookmarked albums “primary”, etc.

Guess you could look at it that way – I prefer to think of it as choice and ease of use.

And, since some of the comments are going this direction, I don’t want to get into the whole MQA is bad discussion. I’d be asking for this option if Tidal offered, say, DSD files. I’m happy with PCM so I’d like the option of viewing the types of files I use as the default instead of having to dig down a couple of layers to find them.

Also - I have request:
If it is ok with everyone here, let’s keep this thread focused on adding the choice option (please) and keep opinions about file containers to the other threads specifically focused on that. TIA!

Guess you could look at it that way – I prefer to think of it as choice and ease of use.

As do I. Give me the choice whether to display MQA versions first or not. As it is, I don’t have the choice and ease of use suffers.

It appears that with the new release, the default view on Tidal is to show MQA versions of albums …

Hey Chris, I don’t actually think this is true. It seems to alternate, or maybe it’s random. Looking over “New” albums from Tidal in Roon, I noticed one–Landfall, by Laurie Anderson and the Kronos Quartet–that I thought was in MQA–but it was listed as CD-resolution:

So I went over to Tidal and looked–and in fact both versions–CD and MQA–are listed there. But the CD-res version shows up in Roon, in the “New” section.

So I glanced at the “Masters” tab in “New on Tidal” and picked out another album at random (except near the beginning of the list): Caer’s “Twin Shadow”. So I returned to the “New” tab and tracked it down: 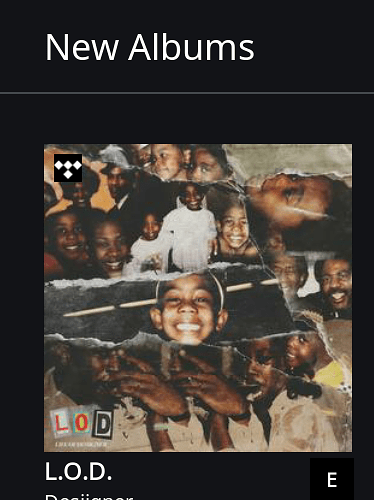 CD version shows up there.

I understand that you want to prioritize one type or the other. It’s a reasonable request. But it does not seem to be true that Roon is prioritizing “Master” versions.

An interesting question: What happens if you set your Tidal Streaming quality (in Tidal) to “High”–not “Master”?