Roon is taking Qobuz purchases and adding them to the library, but as I have previously downloaded the tracks I bought from Qobuz it is double counting them on the overview screen, but not on the Albums screen.

I see (and already reported) the very same
but… I’m browsing my library in Album view (sorted by “Date Added”) and most (if not all, can’t really tell as I have many -> 100s) of my Qobuz purchases are there, marked as new and added today.
Local copies (downloaded time ago) are showing as (independent) duplicates

Very excited to read about the update this morning. However, no update available on AppStore for my iPad. So I cannot use Roon at all.

“Good” thing is I have to go to work 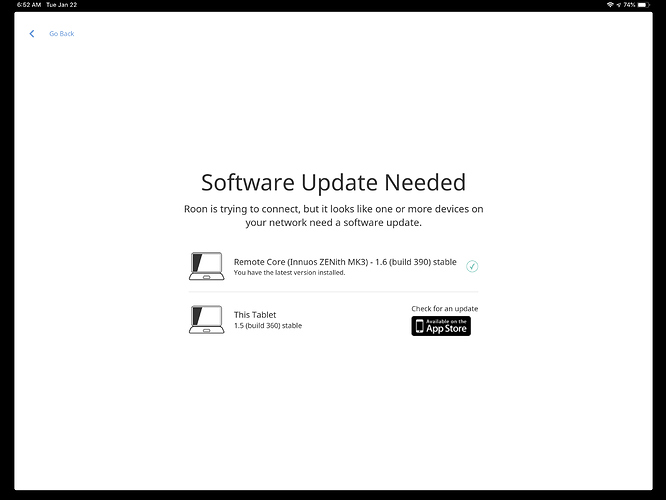 Yes, I had one duplicate , but that is because I had previously edited the metadata for that album… What i did was delete the album from the file location (Not Roon and after having backed it up to another location). Then cleaned up my library in Roon. When I added the album back to the file location , the duplicate issue was gone and Roon recognised my local and Qobuz album as the same one and only shows it once.
Still counts them as 2 albums on the Overview screen though, but not the albums screen.

What i did was delete the album from the file location (Not Roon and after having backed it up to another location). Then cleaned up my library in Roon. When I added the album back to the file location , the duplicate issue was gone and Roon recognised my local and Qobuz album as the same one and only shows it once.

… can’t try it here: it would take ages

(my) only hope is… developers coming out with a fix

Could you not delete all Qobuz purchases - move them to a different file location and then clean the Roon Library? Then add all the files back to the Roon file location?

9 posts were split to a new topic: “Album View” in Now Playing?

Unfortunately, I think the identification of your Qobuz purchases has to be a manual process. You can view all your purchases in Roon - but you can’t export that to an Excel spreadsheet, so it gets a bit laborious…

Artist photos on now playing are cut off at the top. Looking at JJ Cale’s t-shirt just now.

Please bring back the ability to clear all queued tracks or upcoming queued tracks in a single click, in the iPhone Roon App. The new system requires too many clicks to clear queue.

Good work guys! Pretty much half the changes benefit me and half don’t. Qobuz isn’t available in Finland and I always have DSP functions turned off. Radio is great feature on Roon and it’s great that it got attention on the update. Let’s see how it works in future. What I waited most was the vertical scrolling to the album browser but it seems I still have to wait for it. I like the visual changes that did happen though, all except the new “half view” of the spectrum. Liked the full view better, it’s clearer to read IMO. New now playing view is great, also search is clearer now and reminds me of Spotify search.

I also waited for Roon Ready support on Mutec products but still nothing there. I e-mailed Mutec last August and back then they said it should be released soon…

Excited for the new release. Anyone else having issues with their Oppo 205? At first when I would play music it would cut in and out with the device disappearing and reappearing on the screen. I just did a full restart of the server and while it recognized the device, the music is silent when playing music. Still checking out the issue.

Thanks for the new release. I love how this already great product keeps evolving. At the same time, Roon still does not have decent Internet radio functionality. I know lots of Roon users are interested in that. Even LMS 2008 functionality would be light years beyond what is currently offered.

Most of the work on this was done over the past 9 months or so, but it didn’t end up complete/polished enough to make it out the door in 1.6. At some point we have to draw the line and deliver a release. It’s still coming.

Congratulations to all at Roon. Qobuz integration and Radio fantastic !

That’s what i did and it worked, although only one album.

Can someone please tell me where the DSP for each audio device is at?

Report the album track and it will get sorted.