At least one of the reasons the duplication is happening may be that Roon is assigning a different album title to an album when it is coming from Qobuz to the one that it is assigning when the same album is in my local library. For instant the Christian Gerhaher/Gerold Huber album of Schumann songs entitled ‘Frage’ is recognised by Roon as having the title ‘Frage’ when it has been imported from Qobuz, but with the title ‘Schumann: Frage’ when it was imported from my library

thought the very same, at first
can’t really check if that’s the case as, as I wrote, I have hundreds of purchased albums (been buying from Qobuz since it’s there: 6-7 years at least I believe) but… looks all purchases have been added anew

What Charles said below…

“Oh man, I think Roon needs to bring in a UI specialist. Not sure what’s going on here, and improvements to the UI is the thing I was looking forward to most, esp the now playing screen. Why feature a giant picture of the artist and not an expanded view of the album cover? A lot of artists in my library don’t have an associated pic (they all have the album cover pic though), so one ends up with a big black or gray screen and tiny lp cover down in the corner. Total fail. Give us total view options please, and not just options for what info is displayed.”

The DSP function for each device is accessed by pressing the volume icon next to the device and then selecting DSP. (There are other ways to access it, too…) 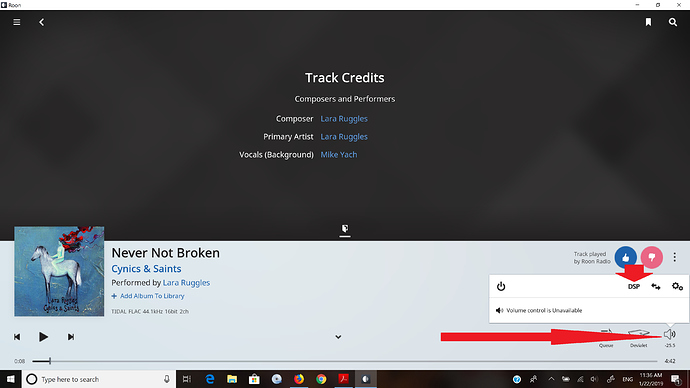 Thank you Roon guys, you made my day! especially with Qobuz in!
(I’ll be happy again when you release a native linux controller although i’m doing fine with windows controller on wine)

Have only had a quick poke around in 1.6 so far, signed up for the Qobuz trial alongside my current TIDAL sub, but I have to say its looking great! Thank you Roonies

A post was split to a new topic: Playback failed on HQ Player after 1.6 update

Thanks to Roon for this great update.

Lot to explore in Radio function

I assume that it is the Roon updater that - without any additional information - seeks to run osascript, crashes and then gives this error.

Not a great way to upgrade in this day and age…

Totally dumb question. I updated to 1.6 on my pc and tablet. My Qobuz Cedia trial is still running on my desktop. How or where do I find the Qobuz integration in Roon? When I open Roon I can’t find Qobuz anywhere. Do I need to be in the beta test?

Congratulations on the update. I don’t use Quboz, so couldn’t get excited about that, but I do like most of the other changes you’ve implemented, particularly the new and improved radio. That said, as @soundserge has pointed out there does seem to be something amiss with search. I’m also noticing duplicates of the same track (see the first image below), but these double again when you click through to All Track Search Results (see the second image below).

Quadruple Results in All Track Search 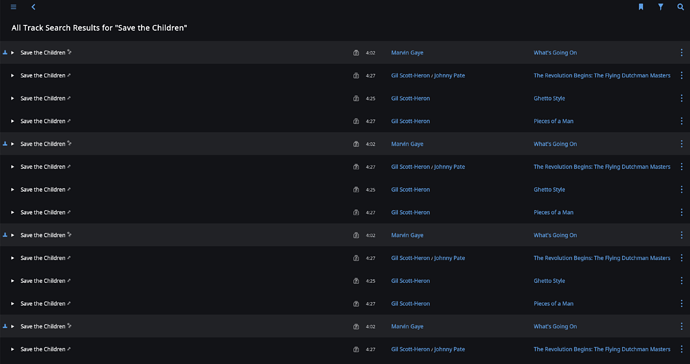 Can someone please tell me where the DSP for each audio device is at?

Any updates on fixes for Android phones with integrated DAC’s regarding playback…e.g. LG V30

I posted about this a few weeks ago – we are working on it, but it didn’t make this release.

When searching, I should not have to toggle this to Yes every single time.

It would be great if you could open up a thread with some examples of searches where you’re not getting what you want – ideally, we’d like the results to be good enough that you never have to touch the switch.

When it comes to product design, adding options is the easy way out – we prefer to just make everything work

Examples help, so thanks in advance for the feedback @Dan_Levy!

Love many of the new layout designs, but I still don’t get, and like, the Profile Bar on the Overview page. For me that is the home page and it is a bit of a wast of space to have my face there… Would be great to have to removed. I think I submitted this as a “feature request” in the first years of using Roon.

Yeah, I see your issue here, and it makes sense. If a purchase is already in your library, having the streaming version also sync into your library is redundant.

We’re going to look into making a change here – thanks for the feedback @Peregrino @pl_svn .

Love many of the new layout designs, but I still don’t get, and like, the Profile Bar on the Overview page. For me that is the home page and it is a bit of a wast of space to have my face there… Would be great to have to removed. I think I submitted this as a “feature request” in the first years of using Roon.

We didn’t get to the Overview page for this release, but a redesign is in the works. No timeframe for now, but I agree – we can do a lot better here.

Would it be a safe assumption, then, that the Android overhaul is a prerequisite for adding WAN playback? That’s been the feature I’ve been looking forward to most (I’ve been using Plex for it, which has been a miserable experience), but I imagine it’ll be a lot of work to get right.