I dont care what anyone says. Roon 1.6 sounds better to me.

I never use upsampling but I did find after the upgrade my music was being upsampled to DSD. Maybe check your DSP settings. Don’t know if anyone else has had the same experience as me?

EDIT Is Roon really that smart, to know that E.S.T. is the right picture to display, but the bio should be Esbjörn Svensson himself? On the othe4 hand, I know that @Brian is a fan of E.S.T., he put me onto them, maybe he coded some logic so3cifically for that case

Wrt the picture on the Now Playing screen. 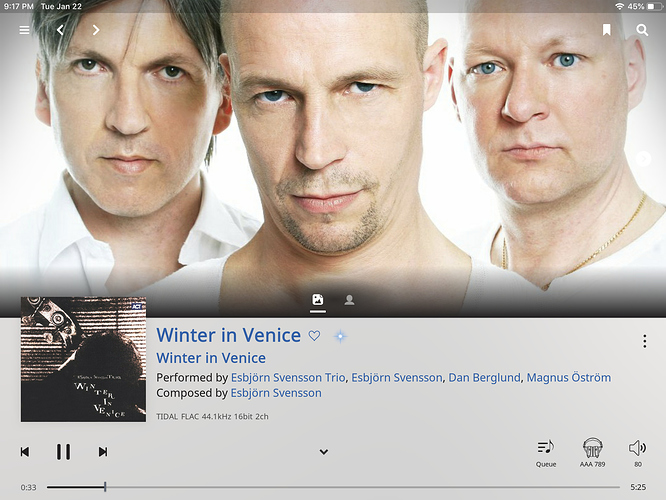 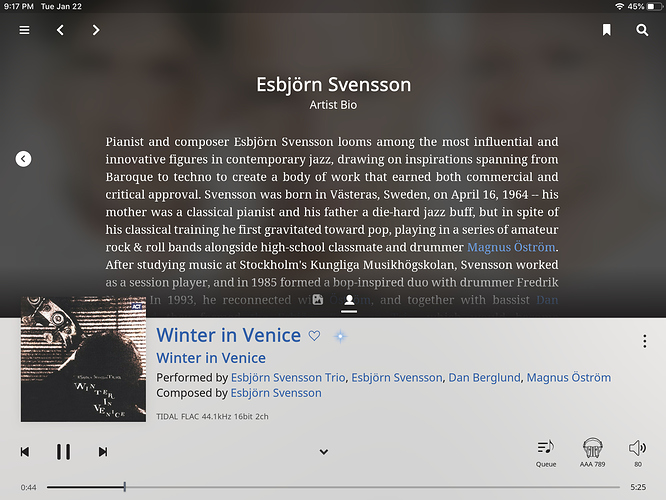 The bio of Svensson is overlaid on the picture of the Trio.

The choices are actually good, in this case. But they are hard to understand. And is Roon really that smart? I will keep looking.

Thanks for the new release Roon team!

Collecting albums from an artist took ages yesterday evening but is back to normal now on first glance.

One tiny detail: Qobuz is not mentioned on the Settings/About/Copyright section.

Love your dedication on this forum. Thanks!

The “Now Playing” is just so uggly. Who at Roon has decided to implement this? This is definetely a wrong road for Roon.

Please roll back the “Now Playing” to the version before.

Static lyrics have embedded timing so will just sit there. Only the clock symbol ones move.

The “footer” is not an improvement, and the once iconic waveform display has gone. Next step, cut all the jelly fish in half too? The waveform display was an instantly recognisable almost trademark. I dunno, but it seems like Roon has morphed from being a serious audiophile grade player into a karaoke machine. But perhaps thats where the market is… /rant

Also I don’t like in iPhone app that I can’t clear upcoming in the cue and I don’t see total time left.

roon is the audio-player i have dreamt of for all of my life. thank you for the hard work over the years.

having said that, the footer of the latest release ist a big disappointment for me.
i’m not talking about functions here, it just seems totally out of place.

the old footer had style, was visually appealing and, what is most, was consistent with the rest of the ui.
the new footer looks like a quick draft for technical preview, before the ui-designer takes over.

don’t get me wrong, i appreciate your work very much, don’t want to sound harsh. i’m sure that countless hours of discussion and programming were needed to implement the new functions.
so why not letting them shine?
I know that you can do much better, as you have proven many times in the past.

Please, give us back the old colours, at least as an optional „classic theme“

Something sounds better with DSP specifically with Convolution.

I agree. Please bring back the iPhone Roon App’s Option to “clear all tracks” in queue with a single click.

Absolutely love 1.6.
Awesome UI and very very happy to see Qobuz on-board.
However I do wonder in this day and age:

Why does radio only show one upcoming track???

—Why kill any possibility of larger album cover art? Now, “now playing” and the web display are effectively the same, except “now playing” lets you index through some other info. But neither gives any option for large “now playing” cover art that updates with the next track.

Agree, James. It looks a bit weird on a 4k screen especially.

Gosh it hurts to think it could be months or next year before these are rectified.

Hopefully now Roon is focusing more on UX, and judging by Brian’s comprehensive responses herein, I’m optimistic we’re on the upward slope in this regard

@Kim_Kruse_Petersen , I would tend to agree with you that the NP screen needs a bit more refinement.

I think it’s also a very +ve step that the guys at Roon are making changes to the UX, trying to perfect things and seeking feedback. Good job!

agree that, certainly for streamed content, “deleting it” should be a painless process. It’s a many-stepped process at present, which is unnecessary.

I am finding the more diverse Roon Radio selections very much to my liking. Roon Radio is pulling up stuff that I haven’t heard before ——until now. Great feature improvement.

Edit: I have to say this might be the most useful feature upgrade yet. Incredible.

It doesn’t if you go to the queue and thumbs up some tracks they build into the queue.

Would it be possible to simply provide the existing new UI/View without remove the old view or have it as an option? Is there a way I can “downgrade” to the previous version of Roon?

While I really appreciate the new release, the new UI/UX part was a bit of a step backwards for me in that it removed useful and functional views like large album art/fullscreen instead of simply adding a new “clean view” option which is what is there now. 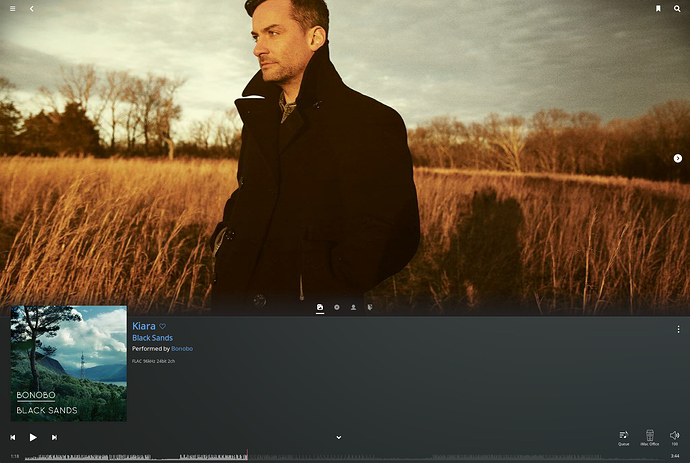 Adding Qobuz to Roon with Tidal is amazing. It feels like bottomless music. So far there’s been a decent mix of choices and resolutions between the two. I am really looking forward to hearing what the “Radio” digs up.