Great release! The integration of Qobuz is a solid business move as it both hedges against future business issues at Tidal and satisfies the streamer community where everyone has their favorite source. (Waiting to try Qobuz in the U.S., I’m on the beta waiting list for a while now.) Also, my initial interactions with the new UI are all positive and I’m looking forward to improved searches, radio, and an AI-driven future.

On another front, I am hopeful that remote access to Roon (WAN) is still on the roadmap. I have ~4TB of music on my Synology NAS (Redbook and above). I use Roon for playback in the house and Synology’s DS Audio app (not so good) to get to my library and play music through my iPhone when not at home/travelling. It offers download of music into the app so it works when disconnected (say on an airplane), but it down samples all music and the UI and player are not very good.

I look forward someday to use the Roon remote on my iPhone to access/download my music for playback when not at home or connected to the Internet. Per the comment above, I understand that streaming sources may not be available in this mode – at least when not on-line, however, for music owners who only use streaming as a supplement, this is not an issue.

Well done and congrats on 1.6!

I believe that my lifetime subscription was one of the best value investments I’ve made in my many years of being an audiophile and music lover.

This is interesting - some of us are seeing this issue, but not all of us are. There’s definitely a bug lurking somewhere, I feel.

For now I’d be happy to see an option to exclude Qobuz unless you are looking in the Qobuz menu item. ie like using Focus to exclude the location ‘Qobuz’ from showing (which I don’t think sticks does it?).

I would like to have more sorting options (other than the actual date added) in My Qobuz–Favorite Albums.

waveform of the remaining time is nearly unvisible

Ditto. I often use the waveform to get an idea of dynamic range. The new look makes that more difficult. But great stuff otherwise.

some of us are seeing this issue, but not all of us are. There’s definitely a bug lurking somewhere, I feel.

… still waiting a word on this from developers

Congrats on this update. A couple of really nice new features. And I’m sure there’s a massive amount of work that went on under the hood that we will see the fruits from in subsequent releases.

Search has improved, although I am seeing these duplicate track results from my local library. I’ve confirmed that the file paths are identical via “View File Info…” 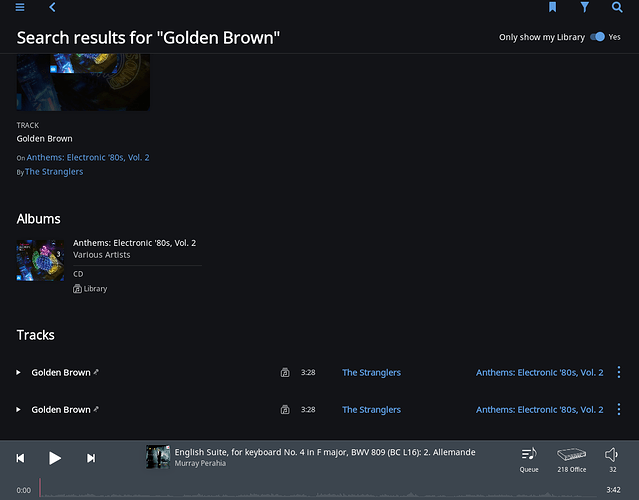 What is going on with the footer?

Ugly as always, only now 3x as wide.

Signing into Qobuz also imported all my purchased albums (and single tracks). This makes sense for Qobuz users who are trying Roon for the first time, but not those who’ve had Roon and have been buying albums for download from Qobuz.

The upvote/downvote thing doesn’t really work at all, and it’s a conceptual issue : how the hell am I supposed to know if something I’m about to listen is what I want to listen to ?

A much more interesting question might be “do you like what you’re listening to ?”, and to ask that, moving the thumbs thing to all the wasted space in the footer, during a track’s playback might be a good stopgap.

Also, and it’s really a matter of courtesy here, it’d be nice to have documentation of how to block the “call home for shared likes” feature. Ideally, it’d be user-facing in the preferences, of course.

Wow, this is exciting! Everything looks great!

One of the first posts I made here, after purchasing Roon last year, was regarding the limited radio functionality. The entire point of a “radio” function is to take you beyond your collection, right? It looks like they’ve made a lot of progress in this area.

For the past couple of weeks, I have been obsessively messing with the parametric eq. Looks like I’ll be messing around even more now. I love what they’ve done here. The new interface is a lot easier to play with. I guess I know what I’ll be doing today.

I’m excited about Qobuz. One question: Does anyone know when Qobuz is expected to come out of beta in the US?. I just signed up to be a beta tester, and am waiting for their response.

Thanks to all of the Roon engineers! Looks like a great update.

Dear Roon Team! Thanks for listening and bringing the Qobuz integration! Now we have choice and access to a brilliant streaming services. In my eyes, Roon & Qobuz are the best combination for audio lovers! Also, thanks for enhancing the Radio function to make use of the connected streaming services as well! I am really excited! Thanks for this nice surprise so early in the new year! Great work!!!

Can’t please all I suppose - but you seem to be in the minority . Ho hum - I love it

Have they removed the ‘Next Up’ info as well … I hadn’t noticed that.
Why would they do that?
I can’t imagine what they think a "now Playing’ screen is for.

Radio update is the bomb!

Love that it now goes outside the local library into Tidal without having to first include albums and tracks in the library.

This makes the “discovery” aspects 100x more useful. Have already found a handful of albums to add to the library in just a couple of hours of Radio.

The coming next is there with options to accept or decline, if declined it asks why to fine tune radio

I know, right? Please developers. Please give us the “Now Playing” option with “Next up” to show larger artwork.

Oh man, I think Roon needs to bring in a UI specialist. Not sure what’s going on here, and improvements to the UI is the thing I was looking forward to most, esp the now playing screen. Why feature a giant picture of the artist and not an expanded view of the album cover? A lot of artists in my library don’t have an associated pic (they all have the album cover pic though), so one ends up with a big black or gray screen and tiny lp cover down in the corner. Total fail. Give us total view options please, and not just options for what info is displayed.

Qobuz integration is nice - if one was actually able to sign up for it in the US. In time I’m sure…

Also, is there a way to start radio without skipping to the end of the que?