edited, a couple of days ago, my Qobuz (and Tidal) playlists titles (using, as it was more comfortable, Qobuz app and Tidal website)

What is wrong? Your playlists from Tidal and Qobuz are not showing in roon? 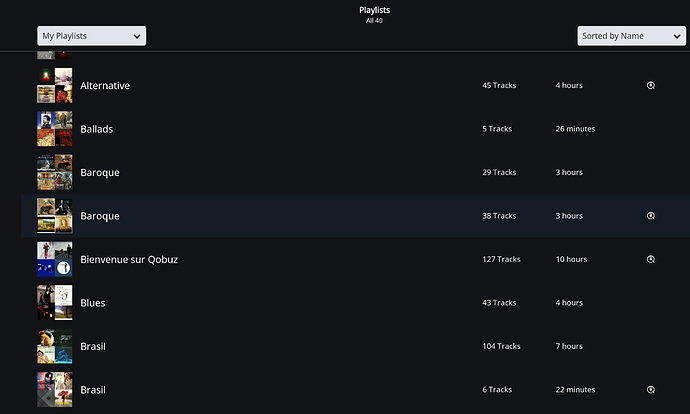 see the duplicates? reason why had to add "Qobuz - " to their names (Qobuz logo doesn’t show when picking a playlist from “Add to Playlist” menu when adding tracks in Album view)

You can only add to a roon playlist whilst in roon. you can’t add tracks to a Tidal or Qobuz playlist - that’s why they aren’t showing up.

… sure? looks some do show! 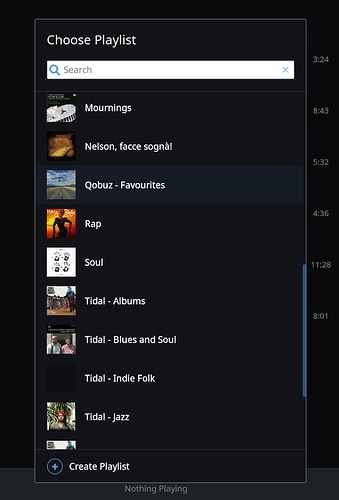 … unless those are local: can’t really tell and this is the reason why I edited their titles

but… however… new titles are still NOT synching two days later (in Roon Playlists, see previous post screenshot) and this was my main question

But once they are Local they are roon local no longer attached to where you got them from, why would you expect them to have a logo from where they came from?
As for the synch - try logging in and out of each service from Settings, services and see if that helps.

I still don’t understand what you mean by playlists but i’ll leave that one.
Flagging @support to have a look at the playlists.

Qobuz playlists are still showing with their old (unedited) names

Can you explain the sequence of events here? Where was the playlist created, when was it edited and where, etc.

Right now the Qobuz API does not send us a notification when a playlist is renamed, so those changes won’t show up in Roon for the moment. We are hoping to implement that change detection soon.

Your screenshot doesn’t show any TIDAL playlists – only Qobuz playlists and Roon playlists, as denoted by the icons at right.

Tidal playlists… those are local: sorry, my bad

Thanks for the info, @pl_svn. I’ve passed this info along to the team. As Mike mentioned above, the Qobuz API doesn’t currently send us the update playlist name information, but we are hoping to implement a change here soon. I’ll be sure to keep you updated once more information is available.