Now with 1.7 finally Qobuz for the first time in Roon plays reliable as before it only did in all other apps. In Roon I had big problems, I guess mainly due to a too aggressive buffering scheme of Roon that blocked further access to data from Qobuz while the actual track was buffering. The first 30’ into a played song Roon was irresponsible to any further operation that needed network access. Now in 1.7 all is fine. So I hope for you that the issue has to do with some congestion in the access to the Qobuz servers and is not an implementation issue of access to Qobuz in your country. Here in France, at least for me, the new less aggressive buffering scheme of Qobuz streaming is the real + of the latest update.

I can confirm the findings from @streamy68. With the update to 1.7 Roon is playing better than ever! The sound quality is much better: more detail, a better placing of the instruments/vocals and quieter (more ‘black’; if you know what I mean). I can even play HiRes up to 192/24 which wasn’t the case with version 1.6.

I notice the signal path always show 24 bit on source of Live Radio, is that correct?

That does seem odd.

Surely has to do with buffer management improvement indeed - @mike was kind enough to explain details in this other thread - basically parallel buffering (smart idea for corner case, but impacting main case perf) was killed.

As we can read in version 1.7 Release Notes: Streaming Optimizations For music playing from TIDAL and Qobuz, Roon now buffers data in a less disruptive way, and there are optimizations which reduce disk activity, CPU usage, and memory traffic. This means that streaming content starts faster and slower internet connections (or lower-powered cores) may also benefit when streaming high-resolution content. I am speculating buffer management design was improved to lower / eliminate risk of audio…

I have loads of options so the Tab A isn’t a train smash . I use a mix of iPad, a 11 in Windows Tablet plus my Android phones so I’ll survive.

I was trying to use one device for everything , phone, book reader music playback on headphones and controlling music but alas

why can’t New Releases For You work for library users? I’d love to have this function.

There is a way to get what you want:

I doń t know about qobuz, but give it a try.

Nice release.Really like the live radio feature.My main request.Its also a speedier experience on my modest Mac so happy here. Happy to pay the yearly subscription for such progressive software. Great stuff.

Don’t frequent the forum much lately, but thought 1.7 had some great features that ticked a few boxes for me.

Most disappointing was the UI, yet more inconsistencies, yet more age old issues still not addressed, but more than anything the iPhone app which is still missing so many features it’s annoying fo use. And mobile is obviously a big omission, but am just used to the range of alternative apps now and actually think they’re better than Roon on the phone and better for music discovery - maybe the update will address this in some way?

I was again forced into this update - I don’t think it’s good design to let anyone click on an annoyingly tenacious popup reminder and forever change the home audio setup - but at least it came with some good features!

Congratulations on the release Roon. Here’s my take of the good, the bad, and the ugly:

They must be listening, Celine Dion is gone from recommendations.

A post was split to a new topic: Skipping with Qobuz playback

A post was split to a new topic: Roon Radio limited to library after 1.7

I was so impressed with Roon I just had to have the Nuc/Rock setup and the lifetime subscription. Over the past month or so of having all the music I wanted available whenever I wanted the newness had worn off and it was just another part of our entertainment system. Have to say I’m excited all over again with the 1.7 upgrade. Like a kid in a candy or toy store. Great job Roon and thanks.

A post was split to a new topic: Issue with singles album names after update

4 posts were split to a new topic: Diagonal Pixel Issues in 1.7 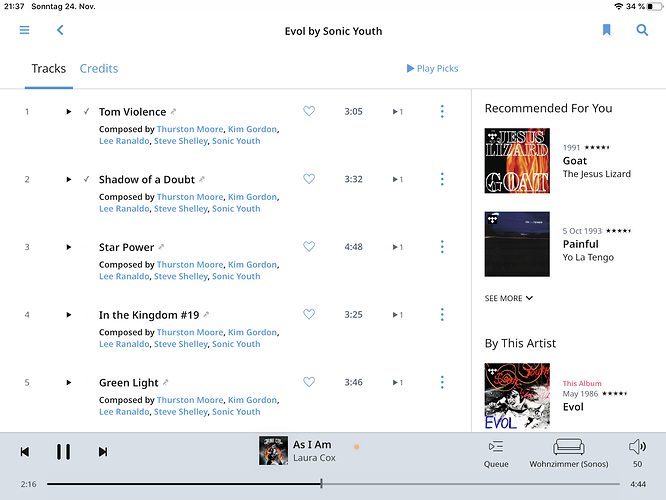 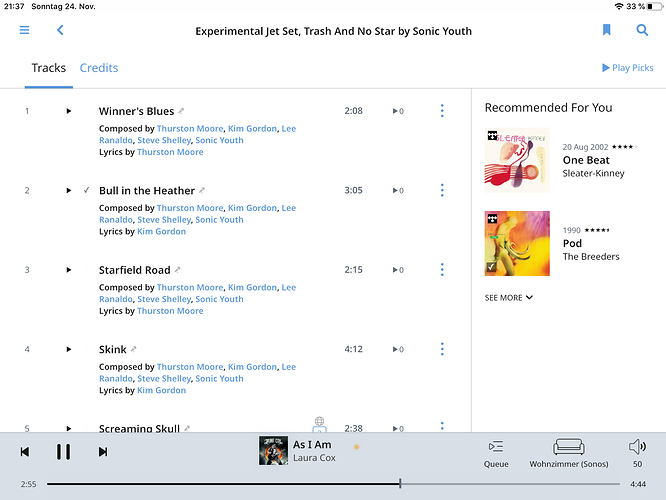 If looking for an album I’d search under albums. Evol?