If I remember correctly, on Roon 1.7, if an album was a reissue or a remaster next to the ‘originally released’ date it also displayed ‘released’ which had the date of reissue.
Roon 1.8 doesn’t show the reissue-date anymore. I looked in the settings but could not find a way to show this information. Or did I miss something?

I cannot find these anymore either. In 1.7 you could display up to 4 different dates so that you could distinguish releases and mastering’s. Recorded, originally released, released, added. This is particularly annoying if you have set these dates and now they are gone.

A screenshot would probably be helpful to understand the issue. I try: 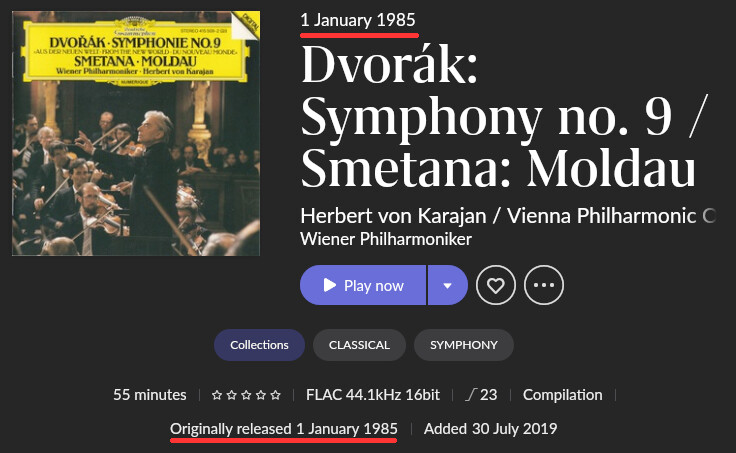 There is currently the same date shown twice. I would expect to see the “Release date” on top. The “Original release date” is shown on the bottom and named accordingly. This looks like a possible bug to me, because I can’t see a reason for the current redundancy in the dates displayed. Both dates are know to Roon for this album:

I also made sure that Settings|General > “Album dates for sorting” is set to “Release date” - not that I would expect that this has an influence on what’s displayed on the album detail screen.

PS: As it seems to me that this is a (possible until confirmation) display bug and not a metadata issue (metadata is available), I move this to the support category of the forum.

At least one of the reasons I didn’t notice is that if picked up from metadata correctly, the original release date and the release date are now so far apart from each other on the screen that they are “disconnected” when they are clearly information that is “connected”. In 1.7, all four dates (if available from metadata) were displayed next to each other so that you could see at a glance the relationship. Recorded, originally released, released, added.

Thanks @darym3 for bringing this up in such a kind way. I appreciate you chiming in @tripleCrotchet - it helps us to know how changes are perceived by as many of our users as possible.

@BlackJack a big thank you for the detailed explanation