You might be cancelled if you say something against Roon 1.8. Can’t you recognize perfection? We users are not intelligent enough to know what we want.

Got it. Thanks a lot!

You can turn it on:
Settings → General → Customize album display

Thanks Arlen, but I’m not seeing a selection in the Custom Album display that allows for displaying the star rating on the albums when shown on the discography page. But it might just be me

I see… I thought you meant the heart. Were the stars visible in album view in 1.7?

Since upgrading ROCK to 1.8 I started noticing what I’ve found to be called ‘coil whine’ coming from my NUC 7I5BNH in fanless Akasa case.
Strangely, only when playing streamed tracks (Qobutz in my case), not with tracks in library.
I opened another thread here:

Still getting used to new 1.8 rel looks and layout, but overall happy with it. Running ROCK on a NUC 7I5BNH which I fitted in an Akasa fanless case, storage in internal mechanical Seagate ST2000LM015 Barracuda 2TB. The NUC is USB connected to the DAC, at 2m distance from listening spot. At very low (night) listening level with quiet music, I can distinctively hear a whizzing noise (at high pitch) coming from the hard disk when a streamed (Qobuz here) track starts, lasting a couple of seconds, …

I never heard this until 1.8, so I wonder if this latest release puts the machine running the core under greater stress when streaming.
Anyone else noticed it? Any hints? (a fix would be even better!

The importance of ROON for me has dropped because they are not supporting file collectors.

The “hype”? There’s no hype, it’s fairly basic: it’s a scrobbler, but because you have visual cues, you can scrobble very precisely. Or at least you could when the bar was full length, it’s trickier now. I use it regularly when I want to go back to a precise point in a song. 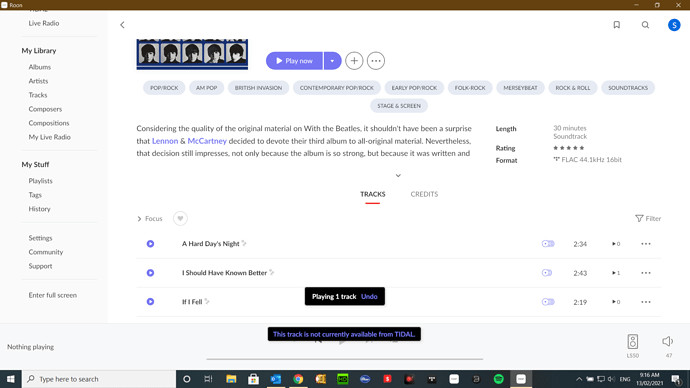 It still works that way, just smaller, no big deal all though I liked the look of the longer one. It’s not often I drag through songs, I like to play a piece complete. If I pause a song in Roon, it picks up where it left off.

I did exactly the same with mine, pointless now!

Yeah the stars were visible when you viewed albums in the discography section… but now the stars are only visible after you click on the album.

Sometimes I select certain albums to explore if I see a high star rating…recognizing of course that this is highly subjective. But it was kinda fun.

Part of the issue I’m seeing is so much repetition.

For example, under the Tidal section there’s a menu bar across the top with What’s new, Tidal Rising, Playlists, etc. Good enough, but then when in What’s New, you’ve also got a Playlists section, which also has a sub menu across the top, and can expand in each of those sub menus. It’s exhausting. Why not just have a top menu Playlists page for anything playlist related, new and archived, etc; and have What’s New dedicated to exclusively new albums, add a top Level Tracks category and put all tracks there. If complete pages were deducted to just one thing under top level menus (a tab system essentially) then there wouldn’t have to be so much more clicking of ‘more’ or pushing of things one doesn’t need. All the same stuff, just separated and streamlined.

Same with the Recommended, Similar, and ‘If You Like So and So’ under an album. What’s the difference? Just pick one and go with it. More of the same doesn’t always mean better - to me it’s just extra work and overwhelming as one has to do yet more opening (which of course means more going back). Just pick one thing and make it the best. Sure, I want to go through ‘doors’ and discover new things, but I’d rather stand in an open plaza and have it come to me.

I’ve got the same setup and no, completely silent, except for the constant whine of tinnitus.

When scrolling like this in ios, Roon crashes on me. I’ll have to use Search instead. 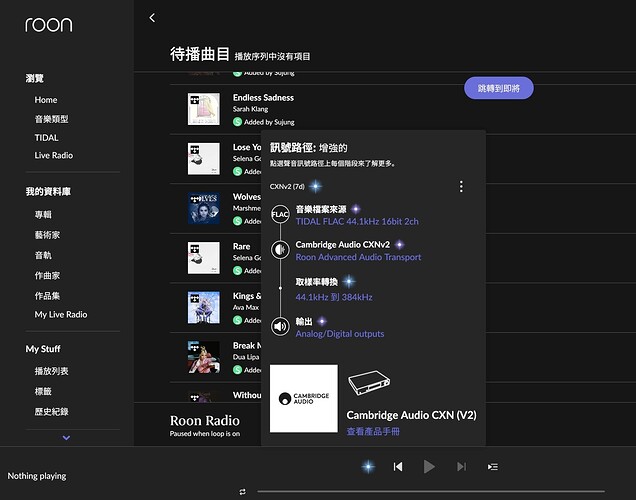 Adding these two pages, a wide open Recent Activity, and a wide open New Releases, to the main menu under Browse would go a LONG way to ameliorating many issues with the Home Page, imo. It’s really all I need to see, and I think for many others. Both of these pages look pretty much how I envisaged 1.8 would be (color scheme is not an official one). Would be nice to have the artist hyperlinked under the album thumbnails. Unfortunately neither of these views are bookmark-able, so one always has to open via Home.

It’s great software and I know myself and many others have been tough, too much so, and I’ll apologize for that as I know it’s a lot of work and it must be tough to not have total validation for it. But it’s almost there, just some bugs first and then perhaps a bit of a rethink for 1.9/2.0 based on 1.8, and mobile devices vs desktops. 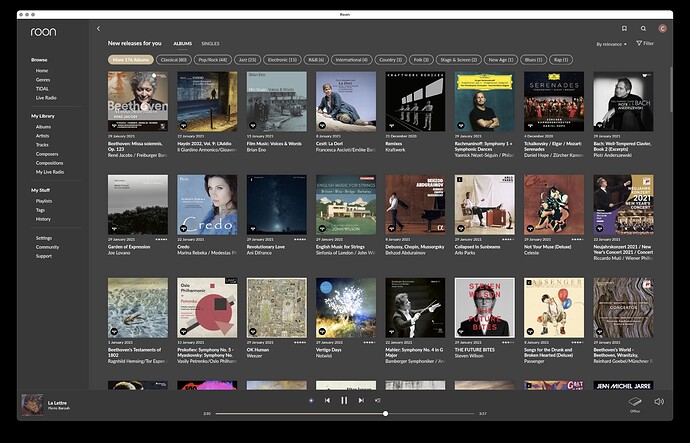 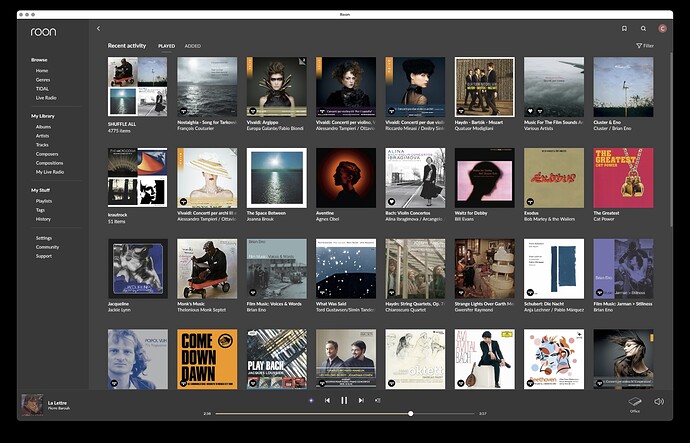 A track and/or album (user selectable?) like/heart button on the bottom play bar next to the title playing would be handy in collapsed library mode - I know it’s there in the Play Now view.

Maybe Roon is now similar to firms who used to routinely ship products with known issues and wants to fix them after the buyer takes delivery. Think of domestic auto manufacturers.

When you see a major miss like this, a company has invited their competition to capture their customers.