“Limiting Roon radio to library” is back

My Live Radio is working now, so try again. I logged it in support so maybe someone saw it.

This is what we waited a year and 3 months for???

On my windows10 computer and when i select setting on my ipad (mini) ROON even crashes (every time).

What would really solve a lot of the GUI stuff would be a kodi addon: RoonConnect!

Anyone know anyone that knows anything about making a kodi addon.

A post was split to a new topic: Playback controls keep disappearing

“New releases for you” - gone

And before the playlist button was bigger and more easy touchable

Futhermore is mis the device (ASIO) “my computer”. (USB Bose Companion) It is gone

I’m surprised. It’s a while since I’ve been to a record store but I used to see alot of them. I have quite a few large box-sets as before streaming it was the most cost-effective way of building a library. Here’s a few, several of these are available on Qobuz. I don’t know about Tidal as I don’t have an accont.

I’m obviously still near the beginning of the process of acclimating to the v1.8 batch of UI changes. I’ve mentioned some things I’m having trouble with in separate replies, but some 100% welcome changes are:

Great… All looks to be working again for me too. Thanks for the heads up.

But I agree, not “extremely common”.

I know that box sets exist. Thanks?

Yeah, I just noticed this too. Shuffling my whole collection is how I use Roon like 50% of the time. Bummer.

Not on all screens, the Album, Artist and most of those under My Library along with Now Playing screen utilize the space, but, the majority are centered like the pic.

Could use some sort of a gray gradient. Or it needs something between 17 & 30% gray… I always liked to use 23% gray for my desktop background.

No more track numbers in playlists? Are you serious? 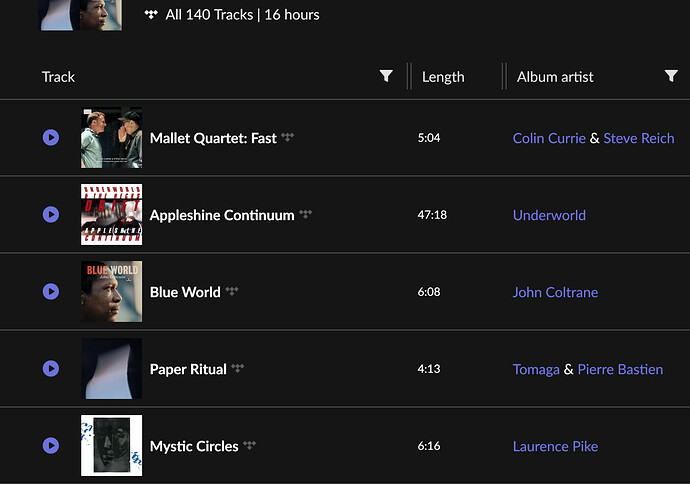