Initial reactions are favourable - although it will take some adjusting. The classical search stuff appears to be much better - I am now able to find a particular composition within a box set, rather than just being given the box set and the ability to look at the discography for a particular composition (at least what is available on Qobuz and my library) is amazing. I am sure I will be using this a lot.

Not all the changes are to my liking - but on balance I think you have got this right and I will adapt to the new look and feel. There is one thing for certain, you cannot satisfy everyone all the time, and you would be foolish to try to do so.

This is a major step forward for classical music lovers. We may be a very niche taste in terms of the overall music listening scene, however we tend to want to listen to high quality audio and many of us,being old white males (if not quite yet dead😀) we have the money to spend pursuing our musical interests!

(On technical matters - the update went smoothly and I am able to access via my iPad Pro as well as my Android phone. I did not update these in advance as advised by you - but was prompted to do so the first time I used them after the update on my Core.).

A post was merged into an existing topic: Settings not displaying properly or crashing on 1.8 [Ticket in - Workaround in thread]

Yuk. How is it possible to make box-set navigation worse? Ah. I know, let’s try vertically scrolling a hundred disks. 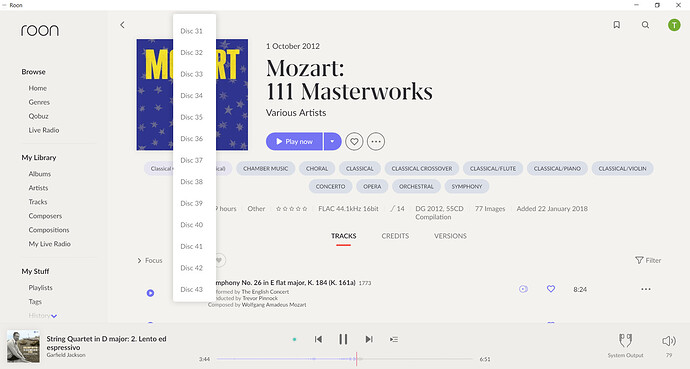 What a mess. What on earth is this screen about?

I have exactly this on iOS as well.

App crash on Display or About selection in Settings.

Automatic update didn’t work on OSX core or remote, maybe because the core is an m1 but remote is intel. Didn’t work on last 1.7 update either.

Downloaded the installer from the website, guessing it was the latest build as the file size had more than doubled, even though banner still said 1.8 coming soon.

An error did pop up a few times saying there was an error and roon radio was sticking to library music. Guess some backend services have fallen over. Just glad roon can keep ticking, for me it’s essential that core library playback still works even if I’m or Roon is offline.

Also enjoyed what I saw in the composer / concert music section so far.

Did just have a strange situation where when I changed tracks the music changed but all the remotes still showed an album from a while back, then couldn’t change tracks anymore or even stop current one. Restarting core app seemed to fix this.

Valence is only picking tracks from my library and not including Qobuz on one artistI did not select this in the queue display.
I am also getting no choices because Valence can’t find any similar tracks to an artist that is well known. She has a number of albums and collaborations. I listened to her last night and Valence was able to pick similar artists quite well in my library and on Qobuz.

Too small font size. Why not configurable?

More touches needed to get to screens that were previously quicker reachable.

Tracks are not numbered on albums and playlists. Why? I have very long play lists and it helps on reference.

Very unstable on ipad. Blue screen artifacts. So many users have these issues. How can this be missed during a testing phase?

No album covers anymore on iPhone too. Very bad. Serious downgrade if you also count numbers have been removed. Wonder based on what good research this was all decided. Maybe listen more to the customers.

From a happy users to a frustrated users. Discussed this week a lifetime license but this helped taking the decision.

Very new however the interface looks modern and fresh.

The first thing I noticed is when viewing playlists on the iPhone. In the prior version each song in a playlist had the album cover icon on the left side. These album icons are now gone. If it was possible on the iPhone in the previous version I do not know why they are now removed.

Try setting IOS Language and roon app Language to English. That should stop the crashes.

DEAR ROON!
Please, please, please get rid of this horrible, close to unreadable, “I’m so oldfashioned”-looking, absolutely unsuitable serif font (for example) … There are more than just classical music lovers in your userbase, who’d for sure appreciate a more modern, more tidied up (not 100 different fonts, sizes etc. on one screen) UI. I was really hoping you’d modernize it with this version, but UI-wise it’s such a huge step in an absolutely wrong direction, that I’ll seriously look for alternatives now!

try to use focus, Tony. I think it is better than before, although the box set problem was not solved.

Installed on Nucleus+, iPad, iPhone, Windows PC. No issues. I like the new interface…a lot! Thanks Roon!

@Scott_Fletcher On the album page select info, the review if there is one will be there.

But, if anything, I’d personally prefer the waveform graphic to be larger & stretch completely across the screen…

Yeah, the new design is pretty, but the waveform display area is really useful for jumping/resetting play position – so for actual practicality, it should take up as much of the available horizontal space as possible. Even in the old design it would’ve been great to have more available placement precision, and this new design goes in the wrong direction with regard to that practical matter and instead gives us less.

Try using Focus instead. It makes things much easier for large boxsets.