There are always some issues with updates. „Bug Sur“ gave me quite some grieve initially. But I had nothing quite as bad as this for a very long time.

A design update was dearly needed, and I like most elements of this. But removing major functionalities and breaking others is a bit too much to take.

The radio problem is temporary and is being addressed by Roon. See

Hi, apologies for troubles, our team is working on a solution for this issue. Thanks! – Ivan

Should be working now. See

Hi, we were able to identify the issue and internet radio playback and browsing should be working fine now. Thanks! – Ivan

The radio issue was completely separate from the 1.8 update. An unfortunate blip in the space time continuum… all fixed now…

Not enjoying Roon 1.8, had to completely remove/reinstall it (after a build update) to get it to work properly, would just hang on startup, even though all my firewall software was disabled. It would still playback as a zone when controlled remotely, but just wouldn’t ever show any info and wouldn’t respond to clicks.

Don’t like the new UI look. Would much rather have an option to revert to old UI look.

Qobuz integration stinks. Roon appears to query qobuz data for an artist before it even bothers to display albums you have locally. For a long time, no albums would appear under an artist when an artist clicked from the main page. The “Album” main display was populated and worked properly, but if you navigated from “Artist”, there was no way to play a song. When I disabled my qobuz account, everything worked properly.

I had no real major issues with 1.7, 1.8 hasn’t bought me anything at all except headaches.

Track skipping is even worse than previosuly. Self-pausing during starting playback not worse but still

Maybe I am special case or expect too much

You should make a thread in the Support section.

If you do, be sure to fill out the form that asks about your system.

I wish they’d drop purple and replace it with blue. I use dark mode to protect my eyes and a black screen with white text and blue highlights would look great. Try the Wikipedia app in dark mode for an example.

And, where the hell are the lock screen controls?

Flagging a minor text-wrapping issue where a line item can exceed the screen’s bounds. Apologies if this is already reported/on the radar:

Semi-related: Would love to see the blue/purple/green orb assets refreshed for 1.8.* They come across a tiny bit low-res compared to the new UI now

I wish they’d drop purple and replace it with blue. I use dark mode to protect my eyes and a black screen with white text and blue highlights would look great. Try the Wikipedia app in dark mode for an example.

Also, absolute black is a terrible background color. It is better to have a very dark color that isn’t black. The contrast of white text (especially small white text) on a fully black background is very hard on the eyes. That’s why the term is “dark mode” and not “black mode”.

This is another thing that was done properly in 1.7 but not in 1.8.

not sure if these two issued have been flagged…

1> library icon does not display on album art – and, yes, it has been toggled ON in the “customize album display” section of settings.

I added some bookmarks using an iPad as the control, usual stuff; ‘Discover’, playlists, genre and format tags, got to ~20 bookmarks into total. Noticed when I viewed them on a Windows PC and my iPhone the order was seemingly completely random so I had to spend a few mins on each device arranging them back into the same order they were stored on my iPad. Not a bigey but annoying and something presumably you could rectify Roon?

This is now the 3rd longest thread on the forums, apart from the “listening to” threads! Pretty hard to keep up with it all.

Would love to be able to customize the data shown on the album page.

Same issue here. Very frustrating, as there’s now no good way (at least that I can find) to listen to random songs. Which was the major way I used Roon.

In Their Prime date confusion: Mudhoney 1988-1995 headline, feature itself only has 1991-1995 albums despite their truly seminal 1988/89 albums available on Tidal. Underwhelmed by this feature - I just want to see an artist’s albums from old to new, in a row, what’s in my library already totally differentiated from what’s on streaming, singles/eps differentiated from albums. I am getting more used to the discography view, though I think 1.7 was least broken in that regards.

Maybe have an option to drop down (open/close) the review without leaving the thumbnail view. Star ratings underneath, as imperfect as they can sometimes be, at least often give clue to the most popular at a glance. Perhaps an option to sort by recording date vs release date (or an amalgamation of both depending on availability). 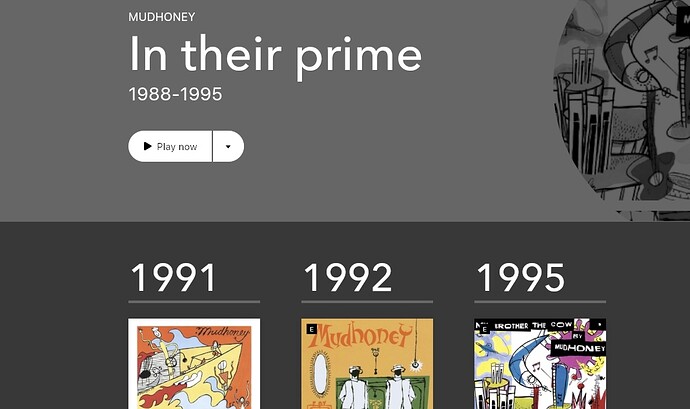 Looking at that screen shot now, it’s so weird how small ‘Mudhoney’ is compared to ‘In their prime’ or the year numbers.

Absolutely! Albums should always been in chronological order from earliest to latest, albums and eps/singles separated

I just tried a work around using Focus someone suggested to get around the lost “New” banner on albums added but not yet played. In doing so I discovered Roon has reset the play count to 0 on about 170 albums!

There doesn’t seem to be any pattern to explain the albums that were reset to 0.