So far, my experience with the new build has been just fine. BUT … I have a question about a feature I can no longer find, and maybe it’s been written out.

Up until v.1.8, when I used the shuffle feature, I would get an option for the next track whether to add it to the queue, or skip it. Now, when I hit shuffle (for the full collection), I get a list of 5,000+ songs already lined up. Is there a setting change I am not seeing? Is that feature gone?

Some of my best playlists have come out of that feature, and now I have to select individual tracks in the queue and remove them. It’s the ol’ opt-in default vs. the opt-out default.

Liking this release overall with a only few gripes/issues. Nice job Roon team! It’s getting closer to perfect for me so congratulations on your hard work updating the look and feel. This app gets better with every release!

A few of my gripes and issues are:

Still no album title in the currently playing track? Sure I can expand to the now playing bar but it would be nice to always show it.

Some of the fonts are too small for me to see. Particularly the artist name and track in the non-expanded bottom player bar, and track titles when viewing an album. Please let us choose small, medium, and large fonts!

The blue purple and salmon pink boxes gotta go! It’s hard as heck for me to read the white text on those colors. Please let us choose our own color schemes!! EDIT: I now see there’s a DIY way to customize the color scheme in the tinkering forum, very cool! Please implement a way to do this in Roon… Maybe some day?

I agree with many commenting the waveform slider is too narrow now. It’s hard to pinpoint a particular part of a long track or suite. I don’t know how they could widen it though as the artist name and track title would be in the way. Maybe move the now playing info above or below the waveform?

Up until v.1.8, when I used the shuffle feature, I would get an option for the next track whether to add it to the queue, or skip it. Now, when I hit shuffle (for the full collection), I get a list of 5,000+ songs already lined up. Is there a setting change I am not seeing? Is that feature gone?

I thought that feature was when using roon radio? When shuffling I think it’s always just loaded up songs into the queue with no option to add or skip the up next track. I could be wrong.

Bug: library symbol not showing up in Similar Albums (it should be on the Arvo album as well).

Also, I think this really points out - why two windows/sections to show mostly the same thing? 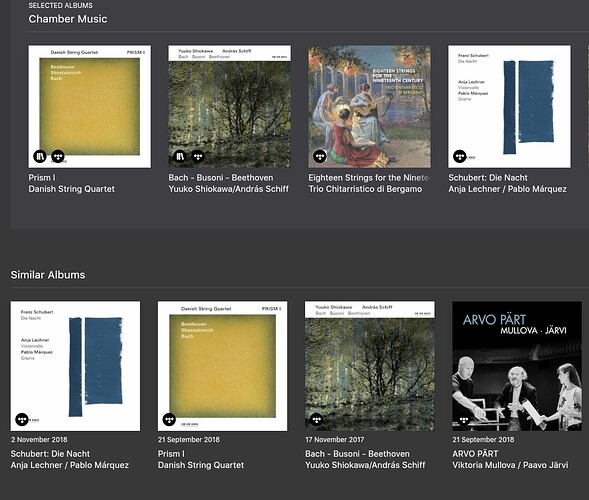 I am more and more annoyed by the huge number of recommendations I get for alternate versions of albums when a superior primary version exists.

Same here. Lots of duplications and suggestions that are ALREADY in my library! Not helpful.

Indeed, with ever smaller bezels, there’s a large chance of accidentally hitting a button if it is located near the edges.

I submitted a bug like this, does it have two versions but the file types are different?

I find there are a lot of views missing “library” content markers and indicators that I thought used to be there in 1.7. I’ve seen a few threads where it is explained that it is simple boolian logic and that behaviour is as expected and that additional library symbols are redundant. Is that what is going on here? Personally I don’t see the harm in redundant symbols, I don’t want to think too hard when engaging with roon. Also in many views these symbols and markers, served a dual purpose as the…

There is now a feature request for this:

Option to turn "in library" badge off / on Feature Requests

Yes - and one can have different settings on each device so one can configure this separately for each device. So there should not be any problems on small screens.

I think the reasoning why its a feature request rather than a bug is that there are now several more of these badges and resolution markers in 1.8. Bit of a stretch if you ask me. The ones from 1.7 no longer have a simple on/off behaviour and resolution information that used to be there so you could at a glance distinguish your versions has gone entirely from several screens. You will find a lot of this is still there if you group your alternative versions. That’s a lot of work though if you haven’t been doing that or you may not even want to as you prefer a different view on your library without your versions hidden.

Looks like another one of these things where it probably makes sense on smaller screens with smaller libraries where you don’t like the clutter. May have just got lost in beta if that was the dominant test case. Hopefully some version of it returns.

No, same versions. The ones without the library symbol in Similar showed they hadn’t been added to my library - if I tried adding them with the + It just got stuck, but if I went to my library albums they were already there. Lots of things going on/not going on.

Many nice things and stable for me (iphone-ipad-imac). However, I’d like to make a few suggestions about layout to increase focus and sense of calm on the pages.

The artist page looks like you tossed the elements on the screen and left them where they landed, but I see some “easy” fixes.

You added the beginnings of a nice tab bar ( Overview-Discography-Compositions) at the top of the text area. Why not add “Genres” and “Biography” to that tab row, and remove the genre links and the bio display from the default screen. This is all optional material that could be easily displayed by clicking the tab. That would clean up the screen considerably.

As many others have pointed out, why the big colored box around Recommended Albums? What purpose does this serve? These should be formatted the same as “Albums in my Library” and “Similar Artists”

I would make similar mods to the Album screen. Move the Tracks-Credits-Versions tabs to the top and add tabs for Genres and Commentary. Eventually, I would add the ability for users to add their comments to the commentary section.

Many more tweaks but this would be a good start

I will not be renewing my Roon sub. Not because I don’t like 1.8, which is a massive improvement overall over 1.7. But usability is still an issue, the difficulty in a simple task as in “liking” a song requires you you first add the album to your library, twice, before you can like the song. This was the case on 1.7 as well, and on mobile it is still a mess.
And then there is the cost (12,99/mo or 120/y)ish + Tidal for 18,99 + and the cost in time maintaining Roon Core, Roon Bridge (ropiee is great, thanks @spockfish) (VitOs, is another option, but it does not get the same amount of love from its creators and requires manual intervention to keep it updated). It all adds up to 350 euros/year + time spent, for a minuscule sound improvement in my opinion. The discovery feature I really like, but that alone does not justify the cost for me, so I am going back to Apple Music. Might as well spend the money on better gear instead.

General UI/UX experience is great on 1.8! I do however have an issue with ROCK (running on a NUC8i3BEK) recognizing my Topping D30 when I turn it back on. My D30 is connected to a Raspberry Pi 4B running the latest version of Ropieee.

Hi George. The 5000 song limit is a known bug that Roon is currently addressing. In case you hadn’t noticed, if you shuffle your entire collection, Roon selects only the first 5000. That means it will shuffle starting with the A’s until it gets to 5000 tracks. If you have a reasonably large library, that may mean it only shuffles maybe the A’s and B’s. You might never hear any tracks outside that range. Hopefully Roon will fix this soon. In the meantime, someone figure out a workaround. If you tag all the albums you want to shuffle with say “Shuffle”, then go to the Tags page under My Stuff, you can shuffle the “Shuffle” tag. That will shuffle all the tracks you selected with no track limit.

When I shuffle my tracks and go to the Queue the next track is at the bottom with a thumbs up/down on the right. Seems to be what you’re looking for.

Was finally forced into a Roon update again. This time I managed to get the family to avoid pressing the most relentless, naggy, belligerent popup in the world, but failed with a couple of iOS updates to the app that meant we had no choice.

Not sure what all the fuss was about really, it’s a slight redesign of the product, where seemingly the design goals were to make it more unified but at the same time uglier - a bit of an assault on the eye in terms of fonts, layout, er, everything, along with stuttery scrolling. Perhaps something’s improved that I haven’t seen yet, who knows.

I stand by my comment at first glance - had it looked like this at launch I probably wouldn’t have bothered.

Thankfully it seems to work at least so life goes on, but a huge disappointment. What a shame, Roon was a product I loved and had such high hopes for, but I think those days are gone.

Not sure what all the fuss was about really,

You will see as soon as you run into one of the quite many things that breaks your personal use case or makes it more difficult. And those are not just esoteric use cases. Many will surely be fixed in time, but that’s simply what much of the fuss was about. (Disregard the usual resistance to all change and people with an odd aversion to some colors, etc.)

I meant more from the other angle - not sure what all the fuss was about in terms of it being such a hyped release. It’s really just the same, but worse - nothing really radical other than rounding, loads of wasted space and mismatched fonts and sizes. It’s a huge step backwards for me personally.

But, life goes on, it’s only music playback. There are far more important things in the world right now…

LOL I see! Sorry for misunderstanding

I suggest you to do the followings:

Most importantly, take it easy, life is short.