this from my pov inkonsistent behaviour is not new to roon v1.8:

i noticed a problem with the search function: i have 23 albums of pink floyd on my local discs and no qobuz etc. every view showed me all albums except if i search for pink floyd. then i see only 17 albums. what is going wrong there? i use roon build 537 on an ubuntu server installation.

look similar to the before mentioned problem…
if i make a text search in a database i expect to get every item that contains that text in any field.

I don’t ‘get’ what’s going on with search at all. A lot of the time it returns topmost whatever is ‘popular’ even if the album/artist has nothing to do with the search words/term inputted. For example I searched ‘sky girl’ looking for the various artists album with that title. It’s there, but two rows down. I’m pretty familiar with the Stones "Some Girls’ LP and I don’t recall ‘sky girl’ ever being a part of it. Same for the other six titles preceding it. What gives? 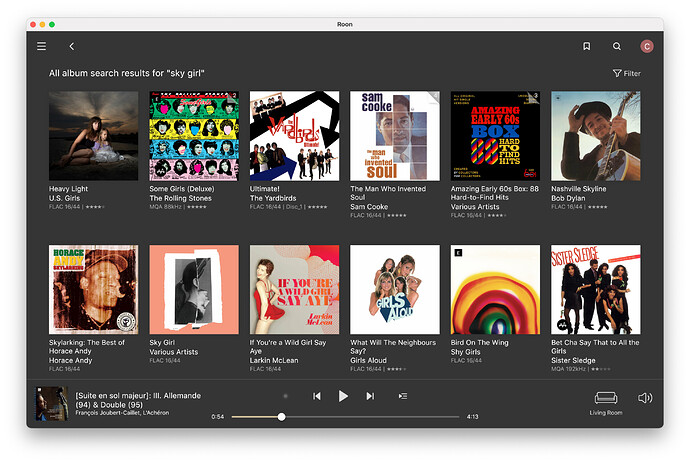 Maybe the search works as “sky or girl” and those albums have artists, titles, or songs with the words “sky” OR “girl” in them.

Mine is an equally weird issue. As I posted above, I have 1272 tracks in approximately 300 mini-albums. Each album is called “Daytrotter Sessions,” after the website that offered them years ago as free and legal mp3 downloads.

Searching with the single term “Daytrotter” returns only 210 tracks, virtually none of which is by an artist whose name begins with “D” or a lower letter of the alphabet.

Perhaps there is a “maximum search results” setting that I have overlooked.

I tried another artist from this label I just discovered (thank you bandcamp). I tried both Linda Smith and “Linda Smith” with pretty identical results. I also went over the top result in albums and see nary a Linda or a Smith - but it is an album by a Chris Smither. IMO not how search should work, a part of a name having precedent over the actual full name. So it’s not even a matter of “OR” but IMO some ‘popular’ algorithm taking over. Crazy. 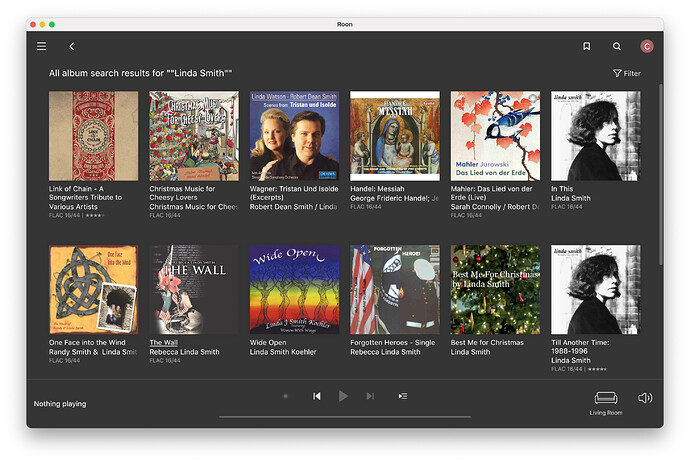 The text search seems really clunky. I think this is another one of those things nobody on the Roon team really has much experience with. Maybe it’s just an artifact of what .NET gives you to work with. Matthew Barnett has an excellent pattern-matching library which presents as a Python module but is really a C library with a thin Python wrapper, and is completely usable from C programs. But there are a lot of good statistical text-search libraries now, and I’m surprised the performance of whatever they’re using isn’t better.

Sad to see this is still not fixed

There is no possibility to see where in a playlist you are - there should be like in every other up a scroll indicator on the right side. [image]

Just discovered that in addition to many of my artists no longer showing their discography for some artists it only shows Qobuz versions of albums not the version in my library from rips/downloads. Gotta say build 778 is a disaster for me. The strength of Roon used to be music management but currently this is almost unusable.

Another search, for hip hop artist Lukah. Unless it’s not anywhere in the system, Lukah should be top, artist and albums, not Suzanne Vega, nobody called Lukas, not Eleni Kairandrou (whom I love), etc. He has two albums, several singles. 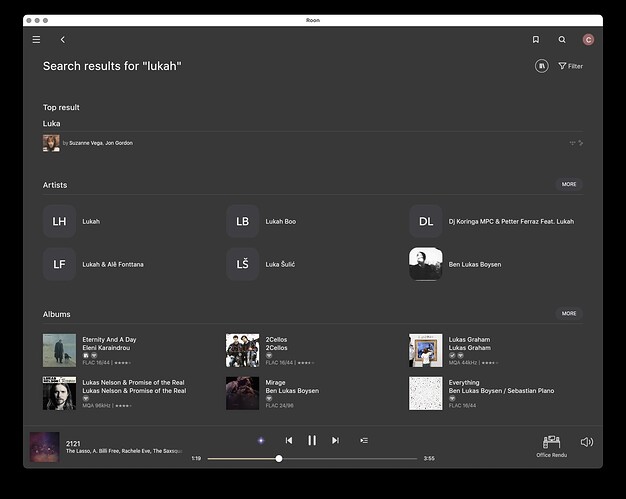 One thing I have noticed. The new version is more sensitive to WiFi congestion. For example, if your cell phone is using WiFi and it is near an endpoint, Roon may drop out. I turned off the WiFi option on our phones and it seems to stop the dropouts. All in all, I am happy with 1.8

Thats interesting. I have noticed drops also…I will try this out

Is the endpoint connected by WiFi or Ethernet in this case Michael ?

@andybob I should have added that. Some of my endpoints are WiFi, some are wired. The symptom is the entire system stops playing, not just the endpoint closest to the phone. The system goes into pause mode and can be started again from my phone or from an endpoint touch screen. It happens so seldom that it is hard to pin down!

I hope I’m posting in the right place.
Roon recommends some tracks on Occult’s profile page from My Library. The thing is that Roon is not showing those albums! Only the recommended tracks and a compilation that includes one track only.
They don’t show on the Discography section either. The file metadata is correct. Any Ideas? 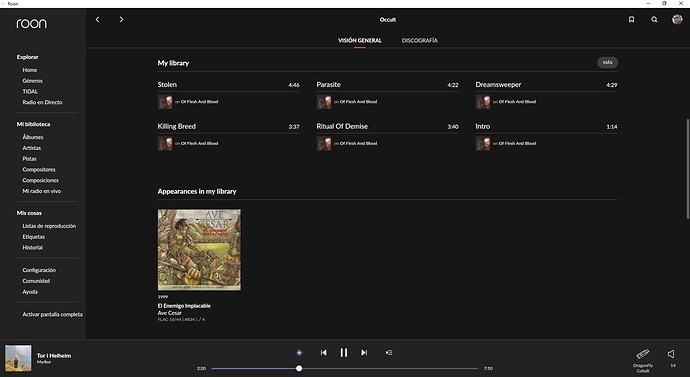 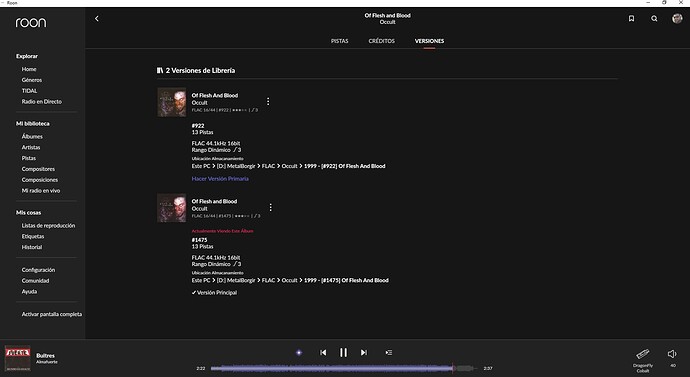 Yep, its a well known bug impacting many users, Roon is working on it.

Please repair the scrolling snap back issue within bookmarks.
That error makes Roon almost unusable for me.

The 1.8 release has been handled awfully. Roon management needs to take a close look at what went wrong and make sure this never happens again. I used to strongly recommend Roon but I can’t do so after 1.8 release.

When releasing new software the stability and reliability should be 1000 times more important than mild tweaks to the user interface. Listening to music is supposed to be a relaxing experience, and having to do software and hardware troubleshooting is the opposite of a relaxing experience.

I expect that a new release of Roon should have tens of thousands of hours of testing before on a wide variety of systems before release. It should not be the job of paying customers to do the beta testing.

Yeah I like Roon, I really do…but after having it for 4 months now, I believe I would rather have a music experience that works every single time.

Roon works for a lot of people. And according to Roon, this was the most successful update ever. I know its not rock solid for me…so every once and a while i plug up a ssd and connect it to my Lumin. And I play tidal via the Lumin app. No skips or tidal loading slow messages.

Its really nice not to worry about what troubleshooting I have to do.

The Lumin app is not as feature rich as Roon. Not even close. But it works well enough, but most importantly to me, the music doesn’t stop.

100% agree. It is a shame that the stability of the product is being compromised, being one of the main reasons why many of us paid for the software. Hopefully they can solve the problem and implement better testing before releasing new versions.

When I look at the composition view for Mendlessohns Violin Concerto, Roon tells me that Alina Ibragimova is the fourth to top performer. When I click on her picture, there are no recordings by her. I only have Qobuz. Is this right? What’s the point of showing popular performers that I have no access to. 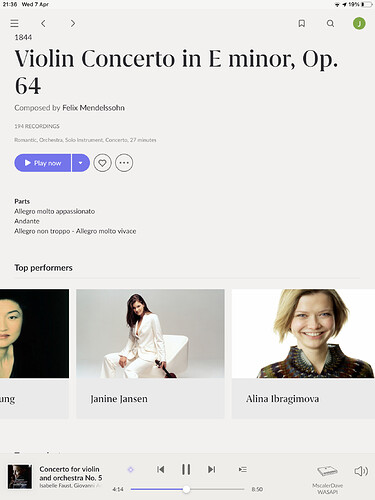 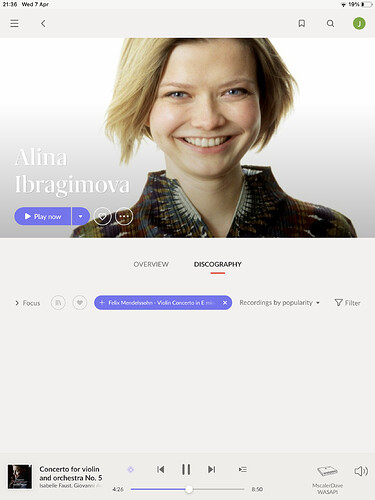