almost every time I resume the iPad version of the app, I get a brief flash of the “lost connection” screen. Started with the latest release, was fine before (ROCK NUC core wired to switch in turn wired to endpoint).

MacBook, roopieee, and remote did all update without issue

Many people report that sound quality improved…maybe I imagine things but I feel like it really sounds noticeably better.

I have two issues on my iPad Pro:

For the crash with settings see here:

Don’t have anything of that, Roon Remote running on a Win7 i7 machine with 8GB RAM 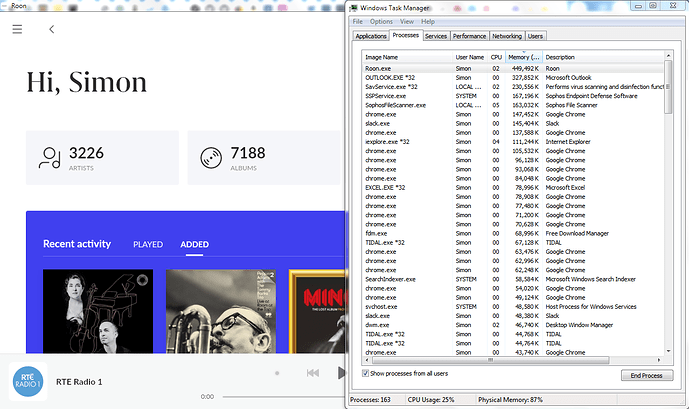 Hi Bert. In relation to Point 2, I have experienced the same on IMac at various times over the past 4-5 releases.
Obviously pressing the space bar, starts the music again as I’m sure you are already aware of, however the trick seems to be (for me at least) to ensure that my cursor is actually flashing in the search entry box before I type the words for my search request.
Only happens very rarely now.
Hope that helps.

Thanks, and for the collection stats: yours is about twice the size of mine, so that doesn’t seem to be the issue, though it does unfortunately now seem to be my issue.

Another Mac/iPhone user here. iPhone has to connect to core every time I use it. Mac application is incredibly slow and right now is telling me I have no tags. Devialet Phantoms are unusable due to constant drop outs. And now the Expert Pro just stopped in the middle of a track. Also I had TIDAL authentication failures until I restarted the server application.

Another MAc/iphone user as well - Core seems to lose connection to the audio zones and the iPhone app is crashing constantly. Restarts of apps, core, computer and iPhone don’t seem to improve things. Previous build did not have these issues.

Andorid phone is also having to reconnect more than previous versions it’s always had this issue but does seem to be more prevalent, perhaps a memory leak?. It must be using more resources and the os is killing it. It does seem to affect lower memory device, my phone has 6gb which isn’t that low a and has always had this issue to sown degree if it’s left in BG for any length of time. The app in general is too resource hungry, other server client apps I have don’t have the same issue.

It’s loose connection or this, made so many tickets about the same thing, happened on my OnePlus as well before the pixel, excuse is its always the device memory. Funny how it’s only Roon that’s affected though.

Anyone get this issue on Tracks on Android, using scroll bar is awful and looses images badly. Put a ticket in

Simon it doesn’t seem like it is publicly shared

Thankfully not that’s about as bad as it can be.
If you throw the app out of memory does it come back smoother?

This was fresh after reboot nothing else running. It’s getting worse on Android 12 every release. I might ditch Andorid entirely for my next phone and go back to the dark side been nearly 6 years and see if it works any better.

Swore off Google’s own phones several year’s ago, but three of my colleagues have them now, so always tempted again, but always issues with them more than anything else I look at

Killed it and it’s the same.