Since installing 1.8, playback often stops and Roon is very slow to reconnect on my iPad. This behavior seems limited to new albums I’ve loaded from Qobuz. I think it has never happened with my own rips/downloads, maybe not with Qobuz albums loaded before 1.8 was installed. This has happened about 10 times now.

very slow to reconnect on my iPad

Is the iPad your only Roon Remote? Is there any change in behavior if you uninstall and reinstall the Roon app on the iPad?

Yes, iPad is my only remote. I will try reinstall, playback has twice stopped this evening. Thanks for the suggestion.

Reinstallng Roon Remote on the iPad seemed to help some. After 4-5 attempts, it finally played a certain entire Qobuz album without issue. But playback stops randomly when Roon is in radio mode, once or twice every day.

Playback has stopped three times in less than one hour. Is it my iPad or the NUC ROCK?

Or it could be a networking issue. Could you describe your network items and setup in some more detail to help diagnosis?

Comcast (blech) ISP, speedtest reports 200 Mb download speed. Netgear R6250 wifi router connected to a PC, photovoltaic array communicator, solar thermal controller, and a Netgear hub in my listening room. The hub has the ROCK NUC, a rarely used PC, and my work PC while I’m telecommuting. Oh, sometimes I connect my iPad to ethernet when I have the wifi turned off.

The only thing different since I started using Roon in 2018 is my work PC but I’ve had that for months whereas the Roon crashes have only happened since 1.8 was released. These crashes seem to mostly happen when using Qobuz but maybe that is more a reflection of how often I use Qobuz? FWIW, after the crashes last night I did play several downloads/rips without issue. And I’ve been listening to Qobuz for nearly one hour this morning without issue.

Can you give some details about your networking setup?

Just to confirm, when playback stops, you also lose connection from your iPad, is that correct?

When this happens are you able to access the Web UI? If so can you share a screenshot of what you see here during this time?

Thanks for the reply. Yes, iPad loses connection and is really slow to reconnect. In fact, I usually turn off the Roon app (by swiping up on the iPad) and restart the app.

I will go the the web UI next time it happens and take a screenshot.

What other network details are you looking for?

Crashed again while playing Qobuz
Did this for maybe 30 seconds 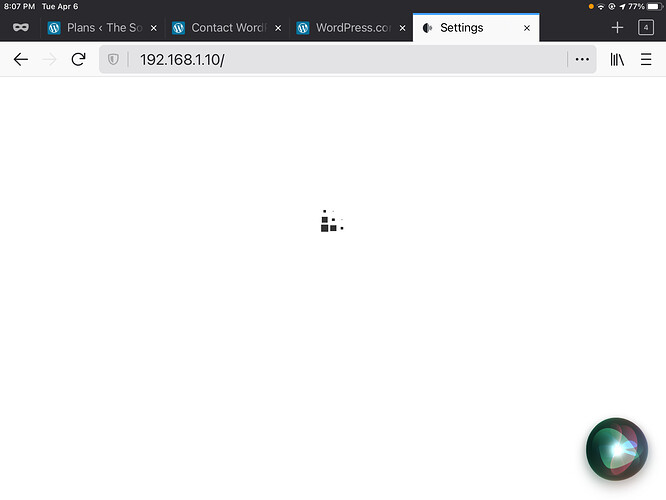 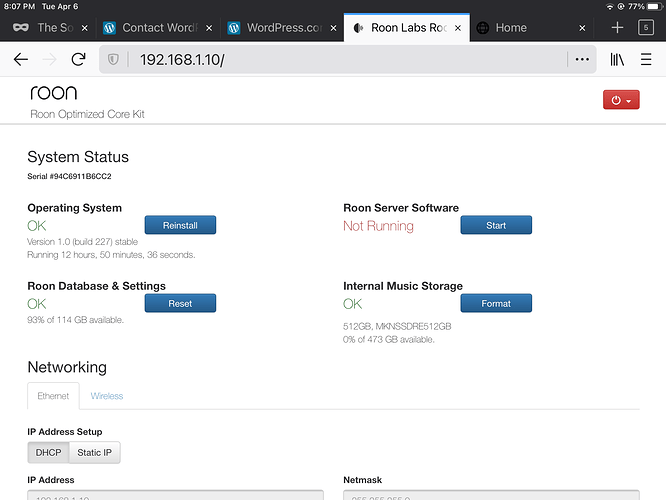 I notice that the Roon Server is showing as “Not Running”. This could be the cause of your problems.

Can you try reinstalling the Operating System by clicking the Reinstall button on the Web Administration Page?

Reinstalling the operating system will not affect your settings or your Roon Database, but it has been known to fix this issue of the Roon Server not starting.

Welp, reinstalling the OS did not fix the problem. Crashed twice today

Current crash, second today, the web UI took a couple of minutes to load. Is that diagnostic of anything? Is the Roon Server Software on the ROCK or iPad?

If you are still seeing this issue occur, can we please ask that you use these instructions to submit a log set after the issue occurs? Any questions, just let us know, thanks!

Try setting to static IP. If that doesn’t work, revert back to dhcp. I’ve had a similar problem. I think it’s a NAT/double NAT issue.

Thank you, Arthur. Just set to static IP after the latest crash. I’ll report back soon.

Welp, that crashed after only 22 minutes. Going back to DHCP.

Yikes, sorry to hear that. But did you restart the server and endpoints after setting it to static IP?

I did not restart the Roon server. But it has been now been running on DCHP for 10 hours without a crash. Fingers crossed. Thanks for the advice.