so, here is the page of elena frolova on spotify:

this is the page in allmusic. 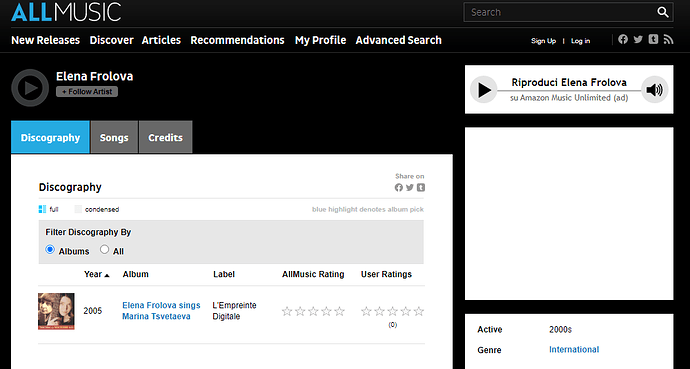 one release. one.
that’s basically the result you get in most of international music. Italian music in allmusic is embarrassing (especially in the quality of metadata)

i think this maybe the biggest problem with roon: allmusic.

allmusic only uses US data from TiVo. Roon uses US, EU, and UK data.

but i have problems in identifying (and get quality metadata) for international albums.
for example, none (almost) of russian (see elena frolova) albums are identified.
while spotify, which is not really a top reference, does much better…

I’m not sure that “Allmusic” is hugely relevant here.

I have just searched for content by Elena Frolova on both Tidal and Qobuz, and neither of the streaming services appear to have any content by this artist.

I appreciate that you probably have a number of her albums ripped from CD onto your NAS for which you would like metadata to be available from Roon. Perhaps it would be best to push for her albums to be allowed to be released to streaming services other than Spotify), at which point I am sure that the metadata would appear. Alternatively, if you don’t have a massive number of her albums, you could always add the metadata (including album artwork) in Roon yourself.

I could only find one song within Roon x Tidal for Elena Frolova. Seems like quite a niche artist who I’d never heard of before so I gave it a listen - most pleasant. Good look with your search for for a more appropriate solution 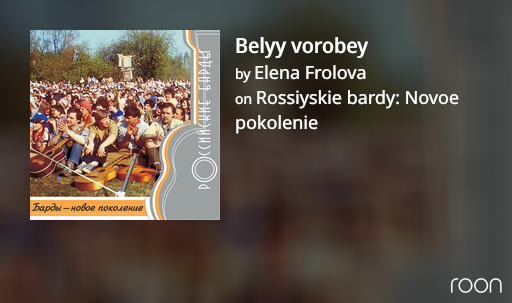 Alternatively, if you don’t have a massive number of her albums, you could always add the metadata (including album artwork) in Roon yourself.

We are always subject to the metadata that is available from the sources that we consume. I would suggest that adding the album details to MusicBrainz (rather than locally in Roon) would be more permanent and benefit everyone.

AllMusic is owned by Tivo. It’s previous name - AllMusicGuide (AMG) was bought by Rovi and then when Rovi bought Tivo they renamed the whole company Tivo. Although I can’t look at AllMusic from overseas, I can’t imagine why they’d not use all their data… On the other hand, Rovi gutted AMG resources when they bought it so who knows…

Just to complete the story:

On December 19, 2019, TiVo merged with Xperi, creating the largest licensing company in the world.

TiVo Corporation, formerly known as the Rovi Corporation and Macrovision Solutions Corporation, was an American technology company. Headquartered in San Jose, California, the company is primarily involved in licensing its intellectual property within the consumer electronics industry, including digital rights management, electronic program guide software, and metadata. The company holds over 6,000 pending and registered patents. The company also provides analytics and recommendation platforms In...

Oh, and one more thing: allmusic only uses the US Rovi data package.

Roon uses the US, EU, and UK packages, so if you can’t find something on allmusic (content or a metadata issue), it doesn’t necessarily mean that it doesn’t exist.

the point is not Elena Frolova. it’s only an example.
it’s international music in general.